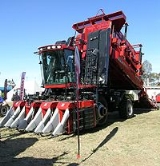 Case IH offers agricultural equipment, financial services, as well as parts and service support for farmers and commercial operators through a network of dealers and distributors.

Bought a cyclo 800 planter at auction with a cyclomiterlll monitor. A few wires and pins broken and missing on connector on planter. I bought a Cycl...

I am looking for information on a Case IH 245 Lawn Turf tractor. I need info on changing the trans/hyd fluid, somehow I have gotten water in the syste...
More 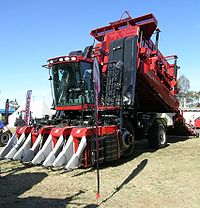 Case IH offers agricultural equipment, financial services, as well as parts and service support for farmers and commercial operators through a network of dealers and distributors.

Productivity enhancing products include tractors; combines and harvesters; hay and forage equipment; tillage tools; planting and seeding systems; sprayers and applicators; and site-specific farming tools. Case IH has won many AE50 awards from the American Society of Agricultural and Biological Engineers, ASABE, for their products.

Some of Case IH’s most famous equipment models include Axial-Flow combines, Magnum tractors, Steiger and Farmall.

Case IH history began when, in 1842, Jerome Increase Case founded Racine Threshing Machine Works on the strength of his innovative thresher. In 1869 Case expanded into the steam engine business and, by 1886, Case was the world’s largest manufacturer of steam engines. The company's founder died in 1891 at the age of 72.

In 1967, Tenneco
Tenneco
Tenneco is a $6.2 billion Fortune 500 company that has been publicly traded on the NYSE since November 5, 1999 under the symbol TEN...
purchased J.I. Case, continuing to market the products under the Case name.

In 1973, they purchased British tractor manufacturer David Brown, and used this acquisition to enter the UK tractor market, ultimately incorporating the DB developed 94 series into its own range of high HP tractors.

In 2005, a STX500 Steiger
Case STX Steiger
The Case STX Steiger is a tractorline built by Case IH. This line continues the models built by Steiger Tractor, which was purchased by Case IH in 1986....
Quadtrac tractor shattered the World Plowing Record, turning 792 acres (3.2 km²) of farmland in just 24 hours.

In 2006, the Case IH logo was displayed on a pair of Ferraris as part of the Ferrari Panamerican 20,000—a journey that took new Ferraris through 16 countries and across 20,000 miles (32,000 km) during a 15-stage, 84-day tour. The International Harvester "IH" logo in Case IH represents the head-on view of a farmer driving a tractor. The “I” symbolizes the driver of a tractor and is known as the red driver “I”.

2007 was the Steiger tractor’s 50th anniversary.

At present, CNH Global continues to manufacture the tractors branded Case IH. All Case IH equipment can use (B5) biodiesel from approved suppliers and nearly half of the models sold globally are approved, following proper protocols, for 100 percent biodiesel (B100).