He married in 1827, and fathered nine children.

How about snow plowing with a garden tractor, say a 400 model or newer 275?
More

After a meager education, he was apprenticed in 1821 at age 17, to Captain Benjamin Lawrence, a prosperous Middlebury blacksmith, and entered the trade for himself in 1825.

He married in 1827, and fathered nine children. But as he was having trouble with creditors, Deere's business suffered. Facing bankruptcy, Deere sold the shop to his father-in-law and departed for Illinois. 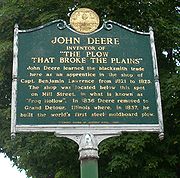 Deere settled in Grand Detour, Illinois
Grand Detour, Illinois
Grand Detour, Illinois is an unincorporated census-designated place in Ogle County, Illinois, United States. As of the 2010 census, its population was 429. The village is named after an odd turn in the Rock River, which flows north past the village, rather than its normal southwestern course.Grand...
. As there were no other blacksmiths in the area, he had no difficulty finding work. Growing up in his father’s Rutland, Vermont, tailor shop, Deere had polished and sharpened needles by running them through sand. This polishing helped the needles sew through soft leather. Deere found that cast-iron plows were not working very well in the tough prairie
Prairie
Prairies are considered part of the temperate grasslands, savannas, and shrublands biome by ecologists, based on similar temperate climates, moderate rainfall, and grasses, herbs, and shrubs, rather than trees, as the dominant vegetation type...
soil of Illinois and remembered the polished needles. Deere came to the conclusion that a plow made out of highly polished steel and a correctly shaped moldboard (the self-scouring steel plow) would be better able to handle the soil conditions of the prairie, especially its sticky clay.

There are varying versions of the inspiration for Deere's famous steel plow. In another version he recalled the way the polished steel pitchfork
Pitchfork
A pitchfork is an agricultural tool with a long handle and long, thin, widely separated pointed tines used to lift and pitch loose material, such as hay, leaves, grapes, dung or other agricultural materials. Pitchforks typically have two or three tines...
tines moved through hay and soil and thought that same effect could be obtained for a plow.

In 1837, Deere developed and manufactured the first commercially successful cast-steel plow. The wrought-iron framed plow had a polished steel share. This made it ideal for the tough soil of the Midwest
Midwestern United States
The Midwestern United States is one of the four U.S. geographic regions defined by the United States Census Bureau, providing an official definition of the American Midwest....
and worked better than other plows. By early 1838, Deere completed his first steel plow and sold it to a local farmer, Lewis Crandall, who quickly spread word of his success with Deere's plow. Subsequently two neighbors soon placed orders with Deere. By 1841, Deere was manufacturing 75-100 plows per year.

In 1843, Deere partnered with Leonard Andrus to produce more plows to keep up with demand. However, the partnership became strained due to the two men's stubbornness - while Deere wished to sell to customers outside Grand Detour, Andrus opposed a proposed railroad through Grand Detour - and Deere's distrust of Andrus' accounting practices. In 1848, Deere dissolved the partnership with Andrus and moved to Moline, Illinois
Moline, Illinois
Moline is a city located in Rock Island County, Illinois, United States, with a population of 45,792 in 2010. Moline is one of the Quad Cities, along with neighboring East Moline and Rock Island in Illinois and the cities of Davenport and Bettendorf in Iowa. The Quad Cities has a population of...
, because of the city's location on the Mississippi River
Mississippi River
The Mississippi River is the largest river system in North America. Flowing entirely in the United States, this river rises in western Minnesota and meanders slowly southwards for to the Mississippi River Delta at the Gulf of Mexico. With its many tributaries, the Mississippi's watershed drains...
, which helped make it a transportation hub. By 1855, Deere's factory sold more than 10,000 such plows. It became known as "The Plow that Broke the Plains" and is commemorated as such in a historic place marker in Vermont.

Deere insisted on making high-quality equipment. He once said, "I will never put my name on a product that does not have in it the best that is in me." Following the Panic of 1857
Panic of 1857
The Panic of 1857 was a financial panic in the United States caused by the declining international economy and over-expansion of the domestic economy. Indeed, because of the interconnectedness of the world economy by the time of the 1850s, the financial crisis which began in the autumn of 1857 was...
, as business improved, Deere left the day-to-day operations to his son Charles. In 1868, Deere incorporated his business as Deere & Company
Deere & Company
Deere & Company, usually known by its brand name John Deere , is an American corporation based in Moline, Illinois, and the leading manufacturer of agricultural machinery in the world. In 2010, it was listed as 107th in the Fortune 500 ranking...
.

Later in life Deere focused most of his attention on civil and political affairs. He served as President of the National Bank of Moline, a director of the Moline Free Public Library, and was a trustee of the First Congregational Church. Deere also served as Moline's
Moline, Illinois
Moline is a city located in Rock Island County, Illinois, United States, with a population of 45,792 in 2010. Moline is one of the Quad Cities, along with neighboring East Moline and Rock Island in Illinois and the cities of Davenport and Bettendorf in Iowa. The Quad Cities has a population of...
second mayor
Mayor
In many countries, a Mayor is the highest ranking officer in the municipal government of a town or a large urban city....
for a two-year term, where despite his disastrous handling of liquor licensing, he improved the city's infrastructure by having streetlights, sewage
Sewage
Sewage is water-carried waste, in solution or suspension, that is intended to be removed from a community. Also known as wastewater, it is more than 99% water and is characterized by volume or rate of flow, physical condition, chemical constituents and the bacteriological organisms that it contains...
and water piping (including fire hydrant
Fire hydrant
A fire hydrant , is an active fire protection measure, and a source of water provided in most urban, suburban and rural areas with municipal water service to enable firefighters to tap into the municipal water...
s) installed and sidewalk
Sidewalk
A sidewalk, or pavement, footpath, footway, and sometimes platform, is a path along the side of a road. A sidewalk may accommodate moderate changes in grade and is normally separated from the vehicular section by a curb...
s repaired, and bought 83 acres (335,889.4 m²) for $23,056 for the creation of a city park. Due to chest pains and dysentery
Dysentery
Dysentery is an inflammatory disorder of the intestine, especially of the colon, that results in severe diarrhea containing mucus and/or blood in the faeces with fever and abdominal pain. If left untreated, dysentery can be fatal.There are differences between dysentery and normal bloody diarrhoea...
Deere refused to run for a second term. He died at home (known as Red Cliff
John Deere House
The John Deere House is an historic building located in Moline, Illinois, United States. The house, which is associated with industrialist John Deere, sits on the edge of a high bluff overlooking the Mississippi River Valley and the urban landscape below...
) on May 17, 1886, at the age of 82.