For the Skaw municipality of Denmark, see Skagen
Skagen
Skagen is a projection of land and a town, with a population of 8,515 , in Region Nordjylland on the northernmost tip of Vendsyssel-Thy, a part of the Jutland peninsula in northern Denmark...
; there is also a Skaw on Whalsay
Whalsay
-Geography:Whalsay, also known as "The Bonnie Isle", is a peat-covered island in the Shetland Islands. It is situated east of the Shetland Mainland and has an area of . The main settlement is Symbister, where the fishing fleet is based. The fleet is composed of both pelagic and demersal vessels...
. 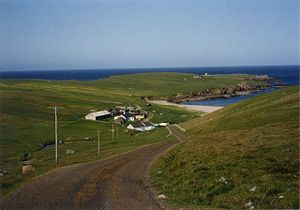 Skaw is a tiny settlement on the Shetland island
Island
An island or isle is any piece of sub-continental land that is surrounded by water. Very small islands such as emergent land features on atolls can be called islets, cays or keys. An island in a river or lake may be called an eyot , or holm...
of Unst
Unst
Unst is one of the North Isles of the Shetland Islands, Scotland. It is the northernmost of the inhabited British Isles and is the third largest island in Shetland after the Mainland and Yell. It has an area of .Unst is largely grassland, with coastal cliffs...
. It is located north of Haroldswick
Haroldswick
Haroldswick or Harold's Wick , is on Unst, Shetland Islands, and is one of the most northerly settlements in the British Isles.-History:...
on a peninsula
Peninsula
A peninsula is a piece of land that is bordered by water on three sides but connected to mainland. In many Germanic and Celtic languages and also in Baltic, Slavic and Hungarian, peninsulas are called "half-islands"....
in the northeast corner of the island, and is the most northerly settlement in the United Kingdom
United Kingdom
The United Kingdom of Great Britain and Northern IrelandIn the United Kingdom and Dependencies, other languages have been officially recognised as legitimate autochthonous languages under the European Charter for Regional or Minority Languages...
. The burn
Burn (stream)
In Scotland, North East England and some parts of Ireland and New Zealand, burn is a name for watercourses from large streams to small rivers. The term is also used in lands settled by the Scots and Northern English in other countries, notably in Otago, New Zealand, where much of the naming was...
(stream) of Skaw flows from the uplands to the west through the constellation of small croft
Croft (land)
A croft is a fenced or enclosed area of land, usually small and arable with a crofter's dwelling thereon. A crofter is one who has tenure and use of the land, typically as a tenant farmer.- Etymology :...
s that make up Skaw, and then east into the Wick of Skaw, a bay of the North Sea
North Sea
In the southwest, beyond the Straits of Dover, the North Sea becomes the English Channel connecting to the Atlantic Ocean. In the east, it connects to the Baltic Sea via the Skagerrak and Kattegat, narrow straits that separate Denmark from Norway and Sweden respectively...
. A sheltered sandy beach lines the coast of the Wick of Skaw.

During World War II
World War II
World War II, or the Second World War , was a global conflict lasting from 1939 to 1945, involving most of the world's nations—including all of the great powers—eventually forming two opposing military alliances: the Allies and the Axis...
, the Royal Air Force
Royal Air Force
The Royal Air Force is the aerial warfare service branch of the British Armed Forces. Formed on 1 April 1918, it is the oldest independent air force in the world...
built a Chain Home
Chain Home
Chain Home was the codename for the ring of coastal Early Warning radar stations built by the British before and during the Second World War. The system otherwise known as AMES Type 1 consisted of radar fixed on top of a radio tower mast, called a 'station' to provide long-range detection of...
radar
Radar
Radar is an object-detection system which uses radio waves to determine the range, altitude, direction, or speed of objects. It can be used to detect aircraft, ships, spacecraft, guided missiles, motor vehicles, weather formations, and terrain. The radar dish or antenna transmits pulses of radio...
station at Skaw. A combined Coastal Defence U-Boat
U-boat
U-boat is the anglicized version of the German word U-Boot , itself an abbreviation of Unterseeboot , and refers to military submarines operated by Germany, particularly in World War I and World War II...
and Chain Home Low
Chain Home Low
Chain Home Low was the name of a British radar early warning system, detecting enemy aircraft movement at lower altitudes than and summarily used with the fixed Chain Home system which was operated by the RAF during World War II...
station was also built at Saxa Vord; after the war this became a ROTOR
ROTOR
ROTOR was a huge and elaborate air defence radar system built by the British Government in the early 1950s to counter possible attack by Soviet bombers...
radar station. RAF Saxa Vord
RAF Saxa Vord
RAF Saxa Vord was a radar station operated by the Royal Air Force. It was situated on the island of Unst, one of the Shetland Islands in the north of Scotland. Its radar provided long-range coverage of the airspace to the North of Scotland...
continued as a radar station after the end of the ROTOR programme.

The unclassified road from the B9087 to Skaw is the most northerly road in the UK road network.

Walter Sutherland
Walter Sutherland (Norn)
Walter Sutherland of Skaw on the island of Unst in Shetland was reported to be the last native speaker of Norn, a Germanic language which had once been spoken throughout Shetland, Orkney and Caithness...
, a former inhabitant of the northernmost cottage in the UK, was reportedly the last native speaker of the Norn language
Norn language
Norn is an extinct North Germanic language that was spoken in Shetland and Orkney, off the north coast of mainland Scotland, and in Caithness. After the islands were pledged to Scotland by Norway in the 15th century, it was gradually replaced by Scots and on the mainland by Scottish...
.