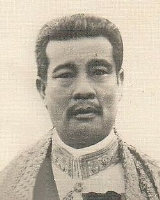 Encyclopedia
Sisowath Monivong (1875–1941) was the king of Cambodia
Cambodia
Cambodia , officially known as the Kingdom of Cambodia, is a country located in the southern portion of the Indochina Peninsula in Southeast Asia...
from 1927 until his death in 1941.

It was during Monivong's rule that Cambodia became open to outside communist influences. In 1930, the Vietnamese leader Ho Chi Minh
Ho Chi Minh
Hồ Chí Minh , born Nguyễn Sinh Cung and also known as Nguyễn Ái Quốc, was a Vietnamese Marxist-Leninist revolutionary leader who was prime minister and president of the Democratic Republic of Vietnam...
founded the Indochina Communist Party which subsequently obtained popularity in Cambodia. The Cambodian communists were intent on their primary objective of overthrowing the French.

In 1940, when France fell to the Nazi German
Germany
Germany , officially the Federal Republic of Germany , is a federal parliamentary republic in Europe. The country consists of 16 states while the capital and largest city is Berlin. Germany covers an area of 357,021 km2 and has a largely temperate seasonal climate...
armies, the occupied French administration, the Vichy
Vichy
Vichy is a commune in the department of Allier in Auvergne in central France. It belongs to the historic province of Bourbonnais.It is known as a spa and resort town and was the de facto capital of Vichy France during the World War II Nazi German occupation from 1940 to 1944.The town's inhabitants...
, took power not only in France (under German rule), but also in France's overseas colonies, including Cambodia. In late 1940, a powerless Monivong noticed that Japan
Japan
Japan is an island nation in East Asia. Located in the Pacific Ocean, it lies to the east of the Sea of Japan, China, North Korea, South Korea and Russia, stretching from the Sea of Okhotsk in the north to the East China Sea and Taiwan in the south...
was making inroads in Vietnam. Japan invaded and occupied Cambodia in early 1941. The Japanese allowed Cambodian French Vichy officials to administer, but under Japanese protection. The Cambodian king was beholden to the Vichy French, who were in turn beholden to the Japanese. In western Cambodia, Thailand
Thailand
Thailand , officially the Kingdom of Thailand , formerly known as Siam , is a country located at the centre of the Indochina peninsula and Southeast Asia. It is bordered to the north by Burma and Laos, to the east by Laos and Cambodia, to the south by the Gulf of Thailand and Malaysia, and to the...
, now an ally of the Japanese, occupied some lands. As the Japanese and Thai oppression of Cambodians became evident, Sisowath Monivong retired to Kampot in late 1941, and died there the same year.

Although his son, Sisowath Monireth
Sisowath Monireth
Prince Monireth Sisowath was Prime Minister of Cambodia, during the French Protectorate Period, from October 17, 1945 to December 15, 1946. One of the most prominent members of the Sisowath line of the royal family at the time, he had earlier been passed over for the throne by the French...
was the heir apparent to the throne, the French authorities chose his daughter Sisowath Kosamak's nineteen-year-old son, Norodom Sihanouk
Norodom Sihanouk
Norodom Sihanouk regular script was the King of Cambodia from 1941 to 1955 and again from 1993 until his semi-retirement and voluntary abdication on 7 October 2004 in favor of his son, the current King Norodom Sihamoni...
, to succeed him, believing that he would be more pliable than Monireth.