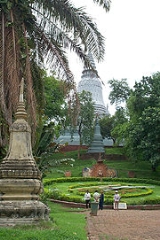 Overview
Phnom Penh is the capital and largest city of Cambodia
Cambodia
Cambodia , officially known as the Kingdom of Cambodia, is a country located in the southern portion of the Indochina Peninsula in Southeast Asia...
. Located on the banks of the Mekong River, Phnom Penh has been the national capital since the French colonized Cambodia, and has grown to become the nation's center of economic and industrial activities, as well as the center of security, politics, economics, cultural heritage
Culture of Cambodia
The culture of Cambodia has had a rich and varied history dating back many centuries, and has been heavily influenced by India. Throughout Cambodia's long history, a major source of inspiration was from religion...
, and diplomacy of Cambodia.

Once known as the “Pearl of Asia”, it was considered one of the loveliest French-built cities in Indochina
Indochina
The Indochinese peninsula, is a region in Southeast Asia. It lies roughly southwest of China, and east of India. The name has its origins in the French, Indochine, as a combination of the names of "China" and "India", and was adopted when French colonizers in Vietnam began expanding their territory...
in the 1920s.

If I have an EI buisness/general visa. What should I do? Go to Imiigration or do I have to leave country?
More
x