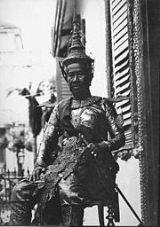 Encyclopedia
Sisowath I(born 1840, died 1927) was king of Cambodia
Cambodia
Cambodia , officially known as the Kingdom of Cambodia, is a country located in the southern portion of the Indochina Peninsula in Southeast Asia...
from 1904 to his death in 1927.

Sisowath was born in Battambang
Battambang
Battambang is the capital city of Battambang province in northwestern Cambodia.Battambang is the second-largest city in Cambodia with a population of over 250,000. Founded in the 11th century by the Khmer Empire, Battambang is well known for being the leading rice-producing province of the country...
in Cambodia. He was the son of King Ang Duong
Ang Duong
Ang Duong was king of Cambodia.Ang Duong was younger son of king Ang Eng, who 1779-1797 was ruler of Cambodia at the then capital Oudong, by one of his Thai consorts, Ros, 'queen Vara' , whom he had taken as concubine in 1793 from Bangkok.He is regarded as the Great-King of Cambodia who...
and half brother of Prince Si Votha
Si Votha
Si Votha was a Cambodian prince who was briefly a contender for the throne. He spent his entire life fighting his half brother King Norodom for the throne, and died without coming close to toppling his half brother from the throne.Si Votha was a grandson of King Ang Eng and a son of King Ang...
and King Norodom
Norodom of Cambodia
Norodom I ruled as king of Cambodia from 1860 to 1904. He was the eldest son of King Ang Duong, who ruled on behalf of Siam, and half-brother of Prince Si Votha as well as the half-brother of King Sisowath. Norodom is cognate with Narottam in Sanskrit which means Best of men . Norodom was...
.

When he was born, Cambodia
Cambodia
Cambodia , officially known as the Kingdom of Cambodia, is a country located in the southern portion of the Indochina Peninsula in Southeast Asia...
was under joint Siamese and Vietnam
Vietnam
Vietnam – sometimes spelled Viet Nam , officially the Socialist Republic of Vietnam – is the easternmost country on the Indochina Peninsula in Southeast Asia. It is bordered by China to the north, Laos to the northwest, Cambodia to the southwest, and the South China Sea –...
ese rule. The royal family lived in the Siamese zone rather than live under Vietnamese oppression. Like his brother King Norodom, Sisowath was educated in the Siamese capital of Bangkok
Bangkok
Bangkok is the capital and largest urban area city in Thailand. It is known in Thai as Krung Thep Maha Nakhon or simply Krung Thep , meaning "city of angels." The full name of Bangkok is Krung Thep Mahanakhon Amon Rattanakosin Mahintharayutthaya Mahadilok Phop Noppharat Ratchathani Burirom...
. He did not return to his native Cambodia until 1860, when his father and the ruling monarch, Ang Duong, died.

He hastily returned to Odong, the royal capital of Cambodia, to prevent his half-brother, Prince Si Votha from seizing the throne. He succeeded, and his other half-brother, Norodom, became king. Although Norodom was more compliant, rebellion broke out in Cambodia, and soon the French
France
The French Republic , The French Republic , The French Republic , (commonly known as France , is a unitary semi-presidential republic in Western Europe with several overseas territories and islands located on other continents and in the Indian, Pacific, and Atlantic oceans. Metropolitan France...
, seeking control of Southeast Asia, forced Norodom to comply with a French protectorate over Cambodia. The French thus drove out the Thai and the Vietnamese, and Cambodia became a French protectorate, though it was quite autonomous.

Sisowath was enraged - and he exiled himself to Saigon in Vietnam in 1864, the other former overlord of Cambodia, in a show of defiance. The French, who also had control of Saigon, persuaded Sisowath to remain there under French "protection", as his life was in danger by the "rebels in Cambodia". In reality, the French used Sisowath as a tool to threaten Norodom. If Norodom was not following France's policies of reform, they could threaten Norodom with Sisowath and say that they would depose Norodom and replace him with Sisowath if he did not comply.

In 1867, when Cambodia was in open rebellion against French rule, King Norodom pleaded Sisowath to return to Cambodia to quell the rising. Sisowath returned from Vietnam to Odong and helped quell the uprising. In 1884, when the French took full control over Vietnam
Vietnam
Vietnam – sometimes spelled Viet Nam , officially the Socialist Republic of Vietnam – is the easternmost country on the Indochina Peninsula in Southeast Asia. It is bordered by China to the north, Laos to the northwest, Cambodia to the southwest, and the South China Sea –...
, Laos
Laos
Laos Lao: ສາທາລະນະລັດ ປະຊາທິປະໄຕ ປະຊາຊົນລາວ Sathalanalat Paxathipatai Paxaxon Lao, officially the Lao People's Democratic Republic, is a landlocked country in Southeast Asia, bordered by Burma and China to the northwest, Vietnam to the east, Cambodia to the south and Thailand to the west...
, and Cambodia, and also defeated Siam in a war in 1893, Cambodia became an open French colony, and the capital was moved from Odong to Phnom Penh. Moving with the royal court to Phnom Penh, Sisowath gave his full support to the French colonial regime. Norodom thus was compelled to name Sisowath his future successor.

In 1904, when Norodom died, Sisowath was crowned as king of Cambodia, a crown that would have gone to one of Norodom's son, Prince Yukanthor, if the latter didn't have a fall-out with the French. During his reign, Sisowath continued Norodom's role in government, where he was well rewarded by the French for his cooperation: they built him a new palace, gifted him with a steam-powered yacht, and supplied him with a complementary ration of 250 lbs of high-grade opium per year. In 1927, he died in Phnom Penh
Phnom Penh
Phnom Penh is the capital and largest city of Cambodia. Located on the banks of the Mekong River, Phnom Penh has been the national capital since the French colonized Cambodia, and has grown to become the nation's center of economic and industrial activities, as well as the center of security,...
. He was succeeded by his son and crown prince, Prince Sisowath Monivong
Sisowath Monivong
Sisowath Monivong was the king of Cambodia from 1927 until his death in 1941.Sisowath Monivong was the second son of King Sisowath. He was born in Phnom Penh in 1875. During this time, his uncle, King Norodom was ruling from Odong, the capital at that time, as a puppet king for the French...
.
The source of this article is wikipedia, the free encyclopedia.  The text of this article is licensed under the GFDL.