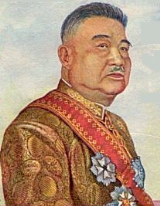 He was born at Luang Phrabang, on July 14, 1885. His father was Zakarine
Zakarine
King Zakarine, also known as Sakkarin, Sakharine, Sackarine, Zackarine, and Zacharine was the King of Luang Prabang from 1895 to 1904.-Early life:He was brought up in Luang...
, King of Luang Phrabang and his mother was Queen Thongsy. He was educated at Lycée Chasseloup-Laubat, Saigon and l'École Coloniale
École nationale de la France d'Outre-mer
The École Nationale de la France d'Outre-Mer was a French grande école, providing training for future colonial administrators...
, Paris
Paris
Paris is the capital and largest city in France, situated on the river Seine, in northern France, at the heart of the Île-de-France region...
. He was known as a "playboy" king. He had up to 50 children by as many as 15 wives, two of whom were his half sisters and one of whom was a niece. Fourteen of the children would die in the Mekong
Mekong
The Mekong is a river that runs through China, Burma, Laos, Thailand, Cambodia and Vietnam. It is the world's 10th-longest river and the 7th-longest in Asia. Its estimated length is , and it drains an area of , discharging of water annually....
after a boating accident.

He succeeded his father as King of Luang Prabang
Luang Prabang
Luang Prabang, or Louangphrabang , is a city located in north central Laos, where the Nam Khan river meets the Mekong River about north of Vientiane. It is the capital of Luang Prabang Province...
after the death of his father, 25 March 1904. Luang Phrabang was then a French protectorate within French Indochina. He ascended the throne, at the old Royal Palace, Luang Prabang, 15 April 1904, and was crowned there, 4 March 1905. During the early years of his reign, the French built a modern palace for him, the Royal Palace of Luang Prabang
Royal Palace Museum
The Royal Palace in Luang Prabang, Laos was built in 1904 during the French colonial era for King Sisavang Vong and his family. The site for the palace was chosen so that official visitors to Luang Prabang could disembark from their river voyages directly below the palace and be received there...
for his use of residence. Under his kingdom he had united provinces Houaphan, 1931; Houakhong; Xiengkhouang
Xiangkhoang
Xiangkhouang may refer to:* Xiangkhouang Province* Xiangkhoang Plateau* Xieng Khouang Airport...
and Vientiane
Vientiane
-Geography:Vientiane is situated on a bend of the Mekong river, which forms the border with Thailand at this point.-Climate:Vientiane features a tropical wet and dry climate with a distinct monsoon season and a dry season. Vientiane’s dry season spans from November through March. April marks the...
, 1942; Champassak and Sayboury, 1946.

He was a lifelong supporter of French rule in Laos, and in 1945 he refused to cooperate with Lao nationalists and he was deposed when the Lao Issara declared the country independent. In April 1946, the French took over once again and he was reinstated as king (the first time a Lao monarch actually ruled all of what is today called Laos).
In 1954 he celebrated his Golden Jubilee
Golden Jubilee
A Golden Jubilee is a celebration held to mark a 50th anniversary.- In Thailand :King Bhumibol Adulyadej, the world's longest-reigning monarch, celebrated his Golden Jubilee on 9 June 1996.- In the Commonwealth Realms :...
, becoming the longest-reigning king in Asia until King Bhumibol Adulyadej
Bhumibol Adulyadej
Bhumibol Adulyadej is the current King of Thailand. He is known as Rama IX...
of Thailand
Thailand
Thailand , officially the Kingdom of Thailand , formerly known as Siam , is a country located at the centre of the Indochina peninsula and Southeast Asia. It is bordered to the north by Burma and Laos, to the east by Laos and Cambodia, to the south by the Gulf of Thailand and Malaysia, and to the...
, who surpassed his reign in 2001.

When he became ill, he made his son Crown Prince Savang Vatthana
Savang Vatthana
Savang or Sisavang Vatthana was the last king of the Kingdom of Laos. He ruled from 1959 after his father's death, until his forced abdication in 1975...
regent. His son succeeded him on his death in 1959. He was cremated and buried in Wat That Luang in 1961, and during his funeral procession was transported by the royal funeral carriage, a 12-meter-high wooden hearse with a carved seven-headed serpent. Many representatives were at the state funeral including Prince Bhanubandhu, who represented Thailand.

Because he presided over independence from the French Union, statues of him survived the communist revolution and remain in Luang Prabang and Vientiane. Both statues depict him in the act of bestowing a constitution upon the people.