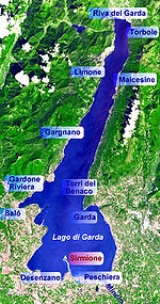 Encyclopedia
Sirmione is a comune
Comune
In Italy, the comune is the basic administrative division, and may be properly approximated in casual speech by the English word township or municipality.-Importance and function:...
in the province of Brescia
Province of Brescia
The Province of Brescia is a Province in Lombardy, Italy. It borders with the province of Sondrio in the N and NW, the province of Bergamo in the W, province of Cremona in the SW and S, the province of Mantova to the S, and to the east, the province of Verona and Trentino .Source for statistical...
, in Lombardy
Lombardy
Lombardy is one of the 20 regions of Italy. The capital is Milan. One-sixth of Italy's population lives in Lombardy and about one fifth of Italy's GDP is produced in this region, making it the most populous and richest region in the country and one of the richest in the whole of Europe...
(northern Italy
Italy
Italy , officially the Italian Republic languages]] under the European Charter for Regional or Minority Languages. In each of these, Italy's official name is as follows:;;;;;;;;), is a unitary parliamentary republic in South-Central Europe. To the north it borders France, Switzerland, Austria and...
). It is bounded by the comunes of Desenzano del Garda
Desenzano del Garda
Desenzano del Garda is a town and comune in the province of Brescia, in Lombardy, Italy, which borders Lake Garda. It is bordered by other communes of Castiglione delle Stiviere, Lonato, Padenghe sul Garda and Sirmione.-History:...
and Peschiera del Garda
Peschiera del Garda
Peschiera del Garda , is a town and comune in the province of Verona, in Veneto, Italy. When Lombardy-Venetia was under Austrian rule, Peschiera was the northwest anchor of the four fortified towns constituting the so-called Quadrilatero...
in the province of Verona
Province of Verona
The Province of Verona is a province in the Veneto region of Italy. Its capital is the city of Verona.-Overview:The province has an area of 3,109 km², and a total population of 912,981...
and the region of Veneto
Veneto
Veneto is one of the 20 regions of Italy. Its population is about 5 million, ranking 5th in Italy.Veneto had been for more than a millennium an independent state, the Republic of Venice, until it was eventually annexed by Italy in 1866 after brief Austrian and French rule...
. It has a historical centre which is located on the Sirmio
Sirmio
Sirmio is a promontory at the southern end of Lake Garda, projecting 3.3 kilometers into the lake. It is celebrated in connection with the Roman poet Catullus, as the large ruins of a Roman villa on the promontory have been supposed to be his country house...
peninsula that divides the lower part of Lake Garda
Lake Garda
Lake Garda is the largest lake in Italy. It is located in Northern Italy, about half-way between Brescia and Verona, and between Venice and Milan. Glaciers formed this alpine region at the end of the last ice age...
.

The first traces of human presence in the area of Sirmione dates from the 6th-5th millennia BCE. Settlements on palafitte existed in the 3rd and 2nd millennia BCE. 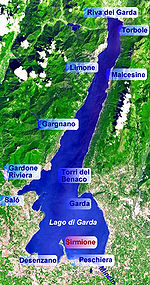 Starting from the 1st century BCE, the area of the Garda, including what is now Sirmione, became a favourite resort for rich families coming from Verona
Verona
Verona ; German Bern, Dietrichsbern or Welschbern) is a city in the Veneto, northern Italy, with approx. 265,000 inhabitants and one of the seven chef-lieus of the region. It is the second largest city municipality in the region and the third of North-Eastern Italy. The metropolitan area of Verona...
, then the main Roman
Ancient Rome
Ancient Rome was a thriving civilization that grew on the Italian Peninsula as early as the 8th century BC. Located along the Mediterranean Sea and centered on the city of Rome, it expanded to one of the largest empires in the ancient world....
city in north-eastern Italy. The poet Catullus
Catullus
Gaius Valerius Catullus was a Latin poet of the Republican period. His surviving works are still read widely, and continue to influence poetry and other forms of art.-Biography:...
praised the beauties of the city and spoke of a villa he had in the area.

In the late Roman era (4th-5th centuries CE) the city became a fortified strongpoint defending the southern shore of the lake. A settlement existed also after the Lombard
Lombards
The Lombards , also referred to as Longobards, were a Germanic tribe of Scandinavian origin, who from 568 to 774 ruled a Kingdom in Italy...
conquest of northern Italy: in the late years of the Lombard kingdom, the city was capital of a judiciary district directly subordinated to the king. Ansa, wife of King Desiderius
Desiderius
Desiderius was the last king of the Lombard Kingdom of northern Italy...
, founded a monastery and a church in the city.

Around the year 1000 Sirmione was probably a free comune, but fell in the hands of the Scaliger
Scaliger
The noble family of the Scaliger were Lords of Verona. When Ezzelino III was elected podestà of the commune in 1226, he was able to convert the office into a permanent lordship...
in the early 13th century. Mastino I della Scala
Mastino I della Scala
Mastino I della Scala , born Leonardo or Leonardino, was an Italian condottiero, who founded the Scaliger house of Lords of Verona....
was probably the founder of the castle. In the same period Sirmione was refuge for Patarines hereticals. The military role of the city continued until the 16th century, but a garrison remained in the castle until the 19th century.

Sirmione was a possession of the Republic of Venice
Republic of Venice
The Republic of Venice or Venetian Republic was a state originating from the city of Venice in Northeastern Italy. It existed for over a millennium, from the late 7th century until 1797. It was formally known as the Most Serene Republic of Venice and is often referred to as La Serenissima, in...
from 1405 until 1797, when it was acquired by the Habsburg Empire
Habsburg Monarchy
The Habsburg Monarchy covered the territories ruled by the junior Austrian branch of the House of Habsburg , and then by the successor House of Habsburg-Lorraine , between 1526 and 1867/1918. The Imperial capital was Vienna, except from 1583 to 1611, when it was moved to Prague...
. It became part of the Kingdom of Italy in 1860. 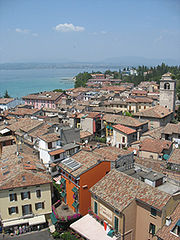 The main historical landmark of Sirmione is the so-called Grotto of Catullus (Grotte di Catullo), the most striking example of a Roman private edifice discovered in northern Italy. The edifice had a rectangular plan and measured 167 x 105 m.
The town is famous for its thermal springs.