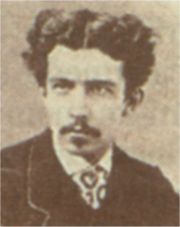 Antonio Fogazzaro was an Italian
Italy
Italy , officially the Italian Republic languages]] under the European Charter for Regional or Minority Languages. In each of these, Italy's official name is as follows:;;;;;;;;), is a unitary parliamentary republic in South-Central Europe. To the north it borders France, Switzerland, Austria and...
novelist.

Fogazzaro was born in Vicenza
Vicenza
Vicenza , a city in north-eastern Italy, is the capital of the eponymous province in the Veneto region, at the northern base of the Monte Berico, straddling the Bacchiglione...
to a rich family.

In 1864 he got a law degree in Turin
Turin
Turin is a city and major business and cultural centre in northern Italy, capital of the Piedmont region, located mainly on the left bank of the Po River and surrounded by the Alpine arch. The population of the city proper is 909,193 while the population of the urban area is estimated by Eurostat...
. In Milan
Milan
Milan is the second-largest city in Italy and the capital city of the region of Lombardy and of the province of Milan. The city proper has a population of about 1.3 million, while its urban area, roughly coinciding with its administrative province and the bordering Province of Monza and Brianza ,...
he followed the scapigliatura
Scapigliatura
Scapigliatura is the name of the artistic movement which developed in Italy after the period known as Risorgimento,...
movement.

In 1869 he was back in Vicenza to work as lawyer, but he left this path very soon to write books full time.

In his works one finds a constant conflict between sense of duty and passions, faith and reason. In some cases this brings the tormented soul of characters into mystic experiences. Arguably his masterpiece was Piccolo Mondo Antico (variously titled in English translations as The Patriot or as Little World of the Past). This well written novel is set in his beloved Valsolda on Lake Lugano, Italy, in the 1850s. It has delightful evocations of the landscape, and strong characterizations which reveal the inner psychological conflicts of the characters.