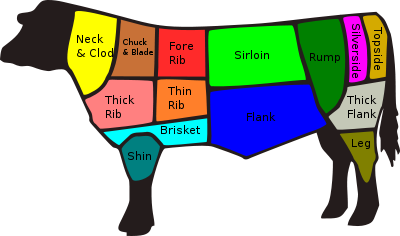 The sirloin steak is a steak
Steak
A steak is a cut of meat . Most are cut perpendicular to the muscle fibers, improving the perceived tenderness of the meat. In North America, steaks are typically served grilled, pan-fried, or broiled. The more tender cuts from the loin and rib are cooked quickly, using dry heat, and served whole...
cut from the rear back portion of the animal, continuing off the short loin from which T-bone
T-bone steak
The T-bone and Porterhouse are steaks of beef cut from the short loin and including a T-shaped bone with meat on each side: the larger is a strip steak and the smaller a tenderloin steak...
, porterhouse, and club steaks
Strip steak
The strip steak is a type of cut of beef steaks. Internationally it is called a club steak. In the United States and Canada it is also known as New York strip, strip loin, shell steak, or Kansas City strip steak, In Australia it is known as a porterhouse steak...
are cut.

The sirloin is actually divided into several types of steak. The top sirloin
Top sirloin
Top sirloin is a cut of meat from the primal loin, subprimal sirloin, of a beef carcass. Top sirloin steaks differ from sirloin steaks in that the bone and the tenderloin and bottom round muscles have been removed; the remaining major muscles are the gluteus medius and biceps femoris...
is the most prized of these and is specifically marked for sale under that name. The bottom sirloin, which is less tender and much larger, is typically marked for sale simply as "sirloin steak." The bottom sirloin in turn connects to the sirloin tip roast.

In British and Australian butchery, the word sirloin refers to cuts of meat from the upper middle of the animal, more equivalent to the American short loin
Short Loin
Short loin is a cut of beef that comes from the back of the steer or heifer. It contains part of the spine and includes the top loin and the tenderloin. This cut yields types of steak including porterhouse, strip steak , and T-bone...
.

The word comes from the Middle English
Middle English
Middle English is the stage in the history of the English language during the High and Late Middle Ages, or roughly during the four centuries between the late 11th and the late 15th century....
surloine, which itself was derived from the Old French
Old French
Old French was the Romance dialect continuum spoken in territories that span roughly the northern half of modern France and parts of modern Belgium and Switzerland from the 9th century to the 14th century...
word surlonge, meaning sur la longe or above the loin. In Modern French, the term evolved to become aloyau or faux-filet.

An often quoted false etymology
False etymology
Folk etymology is change in a word or phrase over time resulting from the replacement of an unfamiliar form by a more familiar one. Unanalyzable borrowings from foreign languages, like asparagus, or old compounds such as samblind which have lost their iconic motivation are...
suggests that sirloin comes from the knighting by an English king (various kings are cited) of a piece of meat.
The source of this article is wikipedia, the free encyclopedia.  The text of this article is licensed under the GFDL.