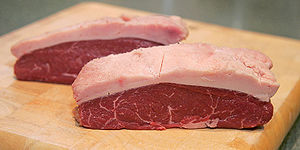 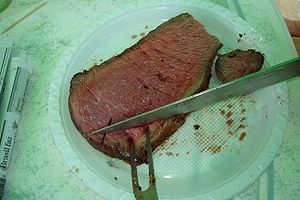 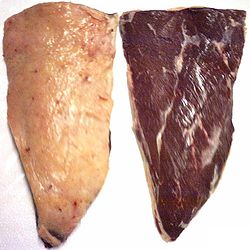 Top sirloin is a cut of meat from the primal loin, subprimal sirloin, of a beef
Beef
Beef is the culinary name for meat from bovines, especially domestic cattle. Beef can be harvested from cows, bulls, heifers or steers. It is one of the principal meats used in the cuisine of the Middle East , Australia, Argentina, Brazil, Europe and the United States, and is also important in...
carcass. Top sirloin steaks differ from sirloin steaks in that the bone and the tenderloin and bottom round muscles have been removed; the remaining major muscles are the gluteus medius and biceps femoris (top sirloin cap steak). Some American butchers call a thick top sirloin steak a chateaubriand
Chateaubriand steak
Chateaubriand steak is a recipe of a particular thick cut from the tenderloin, which, according to Larousse Gastronomique, was created by personal chef, Montmireil, for François-René de Chateaubriand, the author and diplomat who served Napoleon as an ambassador and Louis XVIII as Secretary of State...
, although the French reserve that term for a more premium cut from the tenderloin
Beef tenderloin
A beef tenderloin, known as an eye fillet in New Zealand and Australia, filet in France and Germany and fillet in the United Kingdom, is cut from the loin of beef. As with all quadrupeds, the tenderloin refers to the psoas major muscle ventral to the transverse processes of the lumbar vertebrae,...
.

The word comes from the Middle English
Middle English
Middle English is the stage in the history of the English language during the High and Late Middle Ages, or roughly during the four centuries between the late 11th and the late 15th century....
surloine, which itself was derived from the Old French
Old French
Old French was the Romance dialect continuum spoken in territories that span roughly the northern half of modern France and parts of modern Belgium and Switzerland from the 9th century to the 14th century...
word surlonge, meaning sur la longe or above the loin. In Modern French, the term evolved to become aloyau or faux-filet.

An often quoted false etymology
False etymology
Folk etymology is change in a word or phrase over time resulting from the replacement of an unfamiliar form by a more familiar one. Unanalyzable borrowings from foreign languages, like asparagus, or old compounds such as samblind which have lost their iconic motivation are...
suggests that sirloin comes from the knighting by an English king (various kings are cited) of a piece of meat.

In Brazil, it is called Picanha and is served grilled over open flames, and is one of the meat cuts in the rodizio
Rodizio
Rodízio and the waiters bring an offering of food to each customer at several times throughout the meal, until the customers signify that they have had enough. In churrascarias, servers come to the table with knives and a skewer, on which are speared various kinds of meat, most commonly local cuts...
style restaurants, where it is common to roast the whole piece and then served in slices from it as thin or thick as desired, usually so that several people may share a single piece even though they may not agree on how cooked the meat should be.

Alternatively, a top sirloin may be cut into slices thick enough to stand on their edge on the grill. In this case, the slices, typically seasoned only with rock salt, are usually grilled with the thick layer of fat down until most of it melts away and the remaining fat becomes crispy. Each of the sides is then grilled for about ten seconds. The slices are then cut down the middle, each thus producing two slices only half as thick. The uncooked side of the new slices should then be grilled for a short time and are ready to be served.