Sippar was an ancient Near Eastern city on the east bank of the Euphrates
Euphrates
The Euphrates is the longest and one of the most historically important rivers of Western Asia. Together with the Tigris, it is one of the two defining rivers of Mesopotamia...
river, located at the site of modern Tell Abu Habbah in Iraq
Iraq
Iraq ; officially the Republic of Iraq is a country in Western Asia spanning most of the northwestern end of the Zagros mountain range, the eastern part of the Syrian Desert and the northern part of the Arabian Desert....
's Babil Governorate, some 60 km north of Babylon
Babylon
Babylon was an Akkadian city-state of ancient Mesopotamia, the remains of which are found in present-day Al Hillah, Babil Province, Iraq, about 85 kilometers south of Baghdad...
and 30 km southeast of Baghdad
Baghdad
Baghdad is the capital of Iraq, as well as the coterminous Baghdad Governorate. The population of Baghdad in 2011 is approximately 7,216,040...
.

While pottery finds indicate that the site of Sippar was in use as early as the Uruk period
Uruk period
The Uruk period existed from the protohistoric Chalcolithic to Early Bronze Age period in the history of Mesopotamia, following the Ubaid period and succeeded by the Jemdet Nasr period. Named after the Sumerian city of Uruk, this period saw the emergence of urban life in Mesopotamia. It was...
, substantial occupation occurred only in the Early Dynastic period of the 3rd millennium BC, the Old Babylonian
Old Babylonian
Old Babylonian may refer to:*the period of the First Babylonian Dynasty *the historical stage of the Akkadian language of that time...
period of the
2nd millennium BC, and the Neo-Babylonian time of the 1st millennium BC. Lesser levels of use continued into the time of the Achaemenid
Achaemenid Empire
The Achaemenid Empire , sometimes known as First Persian Empire and/or Persian Empire, was founded in the 6th century BCE by Cyrus the Great who overthrew the Median confederation...
, Seleucid
Seleucid Empire
The Seleucid Empire was a Greek-Macedonian state that was created out of the eastern conquests of Alexander the Great. At the height of its power, it included central Anatolia, the Levant, Mesopotamia, Persia, today's Turkmenistan, Pamir and parts of Pakistan.The Seleucid Empire was a major centre...
and Parthian Empire
Parthian Empire
The Parthian Empire , also known as the Arsacid Empire , was a major Iranian political and cultural power in ancient Persia...
s.

Sippar was the cult site of the sun god (Sumerian Utu
Utu
Utu is the Sun god in Sumerian mythology, the son of the moon god Nanna and the goddess Ningal. His brother and sisters are Ishkur and Inanna and Erishkigal....
, Akkadian Shamash
Shamash
Shamash was a native Mesopotamian deity and the sun god in the Akkadian, Assyrian and Babylonian pantheons. Shamash was the god of justice in Babylonia and Assyria, corresponding to Sumerian Utu...
) and the home of his temple E-babbara.

Sippar has been suggested as the location of the Biblical Sepharvaim
Sepharvaim
Sepharvaim - taken by a king of Assyria, probably Sargon II, .It was a double city, and received the common name Sepharvaim, i.e., "the two Sipparas," or "the two booktowns."...
in the Old Testament
Old Testament
The Old Testament, of which Christians hold different views, is a Christian term for the religious writings of ancient Israel held sacred and inspired by Christians which overlaps with the 24-book canon of the Masoretic Text of Judaism...
, which alludes to the two parts of the city in its dual
Dual (grammatical number)
Dual is a grammatical number that some languages use in addition to singular and plural. When a noun or pronoun appears in dual form, it is interpreted as referring to precisely two of the entities identified by the noun or pronoun...
form.

In the Sumerian king list
Sumerian king list
The Sumerian King List is an ancient manuscript originally recorded in the Sumerian language, listing kings of Sumer from Sumerian and neighboring dynasties, their supposed reign lengths, and the locations of "official" kingship...
a king of Sippar, En-men-dur-ana, is listed as one of the early pre-dynastic
rulers of the region, but has not yet turned up in the epigraphic records.

In his 29th year of reign Sumu-la-El
Sumu-la-El
Sumu-la-El was a King in the First Dynasty of Babylon. He reigned ca.1817 BC - 1781 BC.-References:...
of Babylon
Babylon
Babylon was an Akkadian city-state of ancient Mesopotamia, the remains of which are found in present-day Al Hillah, Babil Province, Iraq, about 85 kilometers south of Baghdad...
reported building the city wall of Sippar. Some years later Hammurabi
Hammurabi
Hammurabi Hammurabi Hammurabi (Akkadian from Amorite ʻAmmurāpi, "the kinsman is a healer", from ʻAmmu, "paternal kinsman", and Rāpi, "healer"; (died c...
of Babylon reported laying the foundations of the city wall of Sippar in his 23rd year and worked on the wall again in his 43rd year. His successor in Babylon, Samsu-iluna
Samsu-Iluna
Samsu-iluna was the seventh king of the founding Amorite dynasty of Babylon, ruling from 1750 BC to 1712 BC middle chronology. He was the son and successor of Hammurabi by an unknown mother...
worked on Sippar's wall in his 1st year. The city walls, being typically made of mud bricks, required much attention. Records of Nebuchadnezzar II and Nabonidos record that they repaired the Shamash temple E-babbara.

Xisuthros
Ziusudra
Ziusudra of Shuruppak is listed in the WB-62 Sumerian king list recension as the last king of Sumer prior to the deluge. He is subsequently recorded as the hero of the Sumerian flood epic...
, the "Chaldean Noah" in Sumerian mythology, is said by Berossus
Berossus
Berossus was a Hellenistic-era Babylonian writer, a priest of Bel Marduk and astronomer writing in Greek, who was active at the beginning of the 3rd century BC...
to have buried the records of the antediluvian
Antediluvian
The antediluvian period meaning "before the deluge" is the period referred to in the Bible between the Creation of the Earth and the Deluge . The narrative takes up chapters 1-6 of Genesis...
world here—possibly because the name of Sippar was supposed to be connected with sipru, "a writing". And according to Abydenus
Abydenus
Abydenus was a Greek historian, and the author of a History of the Chaldeans and Assyrians, of which some fragments are preserved by Eusebius in his Praeparatio Evangelica, and by Cyril of Alexandria in his work against Julian. Several other fragments are preserved by Syncellus. These were...
, Nebuchadnezzar II excavated a great reservoir in the neighbourhood.

Pliny
Pliny the Elder
Gaius Plinius Secundus , better known as Pliny the Elder, was a Roman author, naturalist, and natural philosopher, as well as naval and army commander of the early Roman Empire, and personal friend of the emperor Vespasian...
(Natural History 6.30.123) mentions a sect, or school of Chaldeans called the Hippareni. It is often assumed that this name refers to Sippar (especially because the other two schools mentioned seem to be named after cities as well: the Orcheni after Uruk
Uruk
Uruk was an ancient city of Sumer and later Babylonia, situated east of the present bed of the Euphrates river, on the ancient dry former channel of the Euphrates River, some 30 km east of modern As-Samawah, Al-Muthannā, Iraq.Uruk gave its name to the Uruk...
, and the Borsippeni after Borsippa
Borsippa
Borsippa was an important ancient city of Sumer, built on both sides of a lake about southwest of Babylon on the east bank of the Euphrates. The site of Borsippa is in Babil Governorate, Iraq and now called Birs Nimrud, identifying the site with Nimrod...
), but this is not universally accepted. 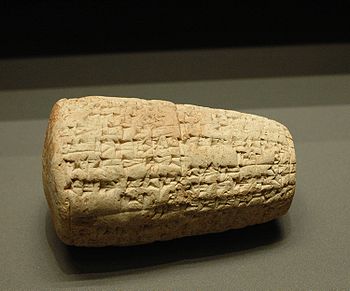 Tell Abu Habba, measuring over 1 square kilometer
was first excavated by Hormuzd Rassam
Hormuzd Rassam
Hormuzd Rassam , was a native Assyrian Assyriologist, British diplomat and traveller who made a number of important discoveries, including the clay tablets that contained the Epic of Gilgamesh, the world's oldest literature...
between 1880 and 1881 for the British Museum in a dig that lasted 18 months.
Tens of thousands of tablets were recovered including the Tablet of Shamash in the Temple of Shamash
Shamash
Shamash was a native Mesopotamian deity and the sun god in the Akkadian, Assyrian and Babylonian pantheons. Shamash was the god of justice in Babylonia and Assyria, corresponding to Sumerian Utu...
/Utu
Utu
Utu is the Sun god in Sumerian mythology, the son of the moon god Nanna and the goddess Ningal. His brother and sisters are Ishkur and Inanna and Erishkigal....
. Most of the tablets were Neo-Babylonian.
The temple had been mentioned as early as the 18th year of Samsu-iluna
Samsu-Iluna
Samsu-iluna was the seventh king of the founding Amorite dynasty of Babylon, ruling from 1750 BC to 1712 BC middle chronology. He was the son and successor of Hammurabi by an unknown mother...
of Babylon, who reported restoring "Ebabbar, the temple of Szamasz in Sippar", along with the cities ziggurat
Ziggurat
Ziggurats were massive structures built in the ancient Mesopotamian valley and western Iranian plateau, having the form of a terraced step pyramid of successively receding stories or levels.Notable ziggurats include the Great Ziggurat of Ur near Nasiriyah, Iraq; the Ziggurat of Aqar Quf near...
.

The tablets, which ended up in the British Museum
British Museum
The British Museum is a museum of human history and culture in London. Its collections, which number more than seven million objects, are amongst the largest and most comprehensive in the world and originate from all continents, illustrating and documenting the story of human culture from its...
are being studied to this day. As was often the case in the early days of archaeology, excavation records were not made, particularly find spots. This makes it difficult to tell which tablets came from Sippar-Amnanum as opposed to Sippar. Other tablets from Sippar were bought on the open market during that time and
ended up at places like the British Museum and the University of Pennsylvania
University of Pennsylvania
The University of Pennsylvania is a private, Ivy League university located in Philadelphia, Pennsylvania, United States. Penn is the fourth-oldest institution of higher education in the United States,Penn is the fourth-oldest using the founding dates claimed by each institution...
.
Since the site is relatively close to Baghdad
Baghdad
Baghdad is the capital of Iraq, as well as the coterminous Baghdad Governorate. The population of Baghdad in 2011 is approximately 7,216,040...
, it was
a popular target for illegal excavations.