Both in early and in late inscriptions Shamash is designated as the "offspring of Nannar"; i.e. of the moon-god, and since, in an enumeration of the pantheon, Sin generally takes precedence of Shamash, it is in relationship, presumably, to the moon-god that the sun-god appears as the dependent power. Such a supposition would accord with the prominence acquired by the moon in the calendar and in astrological calculations, as well as with the fact that the moon-cult belongs to the nomadic and therefore earlier stage of civilization, whereas the sun-god rises to full importance only after the agricultural stage has been reached.

The two chief centres of sun-worship in Babylonia were Sippar
Sippar
Sippar was an ancient Near Eastern city on the east bank of the Euphrates river, located at the site of modern Tell Abu Habbah in Iraq's Babil Governorate, some 60 km north of Babylon and 30 km southeast of Baghdad....
, represented by the mounds at Abu Habba, and Larsa
Larsa
Larsa was an important city of ancient Sumer, the center of the cult of the sun god Utu. It lies some 25 km southeast of Uruk in Iraq's Dhi Qar Governorate, near the east bank of the Shatt-en-Nil canal at the site of the modern settlement Tell as-Senkereh or Sankarah.-History:According to...
, represented by the modern Senkerah. At both places the chief sanctuary bore the name E-barra (or E-babbara) "the shining house"—a direct allusion to the brilliancy of the sun-god. Of the two temples, that at Sippara was the more famous, but temples to Shamash were erected in all large centres – such as Babylon
Babylon
Babylon was an Akkadian city-state of ancient Mesopotamia, the remains of which are found in present-day Al Hillah, Babil Province, Iraq, about 85 kilometers south of Baghdad...
, Ur
Ur
Ur was an important city-state in ancient Sumer located at the site of modern Tell el-Muqayyar in Iraq's Dhi Qar Governorate...
, Mari
Mari, Syria
Mari was an ancient Sumerian and Amorite city, located 11 kilometers north-west of the modern town of Abu Kamal on the western bank of Euphrates river, some 120 km southeast of Deir ez-Zor, Syria...
, Nippur
Nippur
Nippur was one of the most ancient of all the Sumerian cities. It was the special seat of the worship of the Sumerian god Enlil, the "Lord Wind," ruler of the cosmos subject to An alone...
, and Nineveh
Nineveh
Nineveh was an ancient Assyrian city on the eastern bank of the Tigris River, and capital of the Neo Assyrian Empire. Its ruins are across the river from the modern-day major city of Mosul, in the Ninawa Governorate of Iraq....
.


Position in the Mesopotamian pantheon

It is evident from the material at our disposal that the Shamash cults at Sippar and Larsa so overshadowed local sun-deities elsewhere as to lead to an absorption of the minor deities by the predominating one. In the systematized pantheon these minor sun-gods become attendants that do his service. Such are Bunene, spoken of as his chariot driver and whose consort is Atgi-makh, Kettu ("justice") and Mesharu ("right"), who were then introduced as attendants of Shamash. Other sun-deities such as Ninurta
Ninurta
Ninurta in Sumerian and Akkadian mythology was the god of Lagash, identified with Ningirsu with whom he may always have been identical...
and Nergal
Nergal
The name Nergal, Nirgal, or Nirgali refers to a deity in Babylon with the main seat of his cult at Cuthah represented by the mound of Tell-Ibrahim. Nergal is mentioned in the Hebrew bible as the deity of the city of Cuth : "And the men of Babylon made Succoth-benoth, and the men of Cuth made Nergal"...
, the patron deities of other important centers, retained their independent existences as certain phases of the sun, with Ninurta becoming the sun-god of the morning and spring time and Nergal the sun-god of the noon and the summer solstice. In the wake of such syncretism Shamash was usually viewed as the sun-god in general.

Together with Nannar-Sin
Sin (mythology)
Sin or Nanna was the god of the moon in Mesopotamian mythology. Nanna is a Sumerian deity, the son of Enlil and Ninlil, and became identified with Semitic Sin. The two chief seats of Nanna's/Sin's worship were Ur in the south of Mesopotamia and Harran in the north.- Name :The original meaning of...
and Ishtar
Ishtar
Ishtar is the Assyrian and Babylonian goddess of fertility, love, war, and sex. She is the counterpart to the Sumerian Inanna and to the cognate north-west Semitic goddess Astarte.-Characteristics:...
, Shamash completes another triad by the side of Anu
Anu
In Sumerian mythology, Anu was a sky-god, the god of heaven, lord of constellations, king of gods, Consort of Antu, spirits and demons, and dwelt in the highest heavenly regions. It was believed that he had the power to judge those who had committed crimes, and that he had created the stars as...
, Enlil
Enlil
Elizabeth Barrett Browning was one of the most prominent poets of the Victorian era. Her poetry was widely popular in both England and the United States during her lifetime. A collection of her last poems was published by her husband, Robert Browning, shortly after her death.-Early life:Members...
and Ea. The three powers Sin, Shamash and Ishtar symbolized three great forces of nature: the moon, the sun, and the life-giving force of the earth, respectively. At times instead of Ishtar we find Adad
Adad
Adad in Akkadian and Ishkur in Sumerian and Hadad in Aramaic are the names of the storm-god in the Babylonian-Assyrian pantheon. All three are usually written by the logogram dIM...
, the storm-god, associated with Sin and Shamash, and it may be that these two sets of triads represent the doctrines of two different schools of theological thought in Babylonia which were subsequently harmonized by the recognition of a group consisting of all four deities.
The consort of Shamash was known as Aya
Aya (goddess)
Aya in Akkadian mythology was a mother goddess, consort of the sun god Shamash. She developed from the Sumerian goddess Šherida, consort of Utu.- History :...
. She is, however, rarely mentioned in the inscriptions except in combination with Shamash.

Another reference to Shamash is the Babylonian epic Gilgamesh
Gilgamesh
Gilgamesh was the fifth king of Uruk, modern day Iraq , placing his reign ca. 2500 BC. According to the Sumerian king list he reigned for 126 years. In the Tummal Inscription, Gilgamesh, and his son Urlugal, rebuilt the sanctuary of the goddess Ninlil, in Tummal, a sacred quarter in her city of...
. When Gilgamesh and Enkidu
Enkidu
Enkidu is a central figure in the Ancient Mesopotamian Epic of Gilgamesh. Enkidu was first created by Anu, the sky god, to rid Gilgamesh of his arrogance. In the story he is a wild-man raised by animals and ignorant of human society until he is bedded by Shamhat...
travel to slay Humbaba
Humbaba
In Akkadian mythology Humbaba or Huwawa , also Humbaba the Terrible was a monstrous giant of immemorial age raised by Utu, the Sun...
, each morning they pray and make libation to shamash in the direction of the rising sun for safe travels. Gilgamesh receives dreams from Shamash, which Enkidu then interprets, and at their battle with Humbaba, it is Shamash's favor for Gilgamesh that enables them to defeat the monster.


God of law, justice and salvation

The attribute most commonly associated with Shamash is justice. Just as the sun disperses darkness, so Shamash brings wrong and injustice to light. Hammurabi
Hammurabi
Hammurabi Hammurabi Hammurabi (Akkadian from Amorite ʻAmmurāpi, "the kinsman is a healer", from ʻAmmu, "paternal kinsman", and Rāpi, "healer"; (died c...
attributes to Shamash the inspiration that led him to gather the existing laws and legal procedures into code
Code of Hammurabi
The Code of Hammurabi is a well-preserved Babylonian law code, dating to ca. 1780 BC . It is one of the oldest deciphered writings of significant length in the world. The sixth Babylonian king, Hammurabi, enacted the code, and partial copies exist on a human-sized stone stele and various clay...
, and in the design accompanying the code the king represents himself in an attitude of adoration before Shamash as the embodiment of the idea of justice. Several centuries before Hammurabi, Ur-Engur of the Ur dynasty (c. 2600 BCE) declared that he rendered decisions "according to the just laws of Shamash." 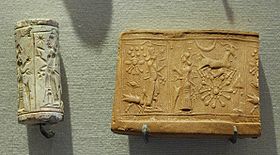 It was a logical consequence of this conception of the sun-god that he was regarded also as the one who released the sufferer from the grasp of the demons. The sick man, therefore, appeals to Shamash as the god who can be depended upon to help those who are suffering unjustly. This aspect of the sun-god is vividly brought out in the hymns addressed to him, which are, therefore, among the finest productions in the entire realm of Babylonian literature.

In both the manga and animated series Shaman King
Shaman King
is a Japanese manga series written and illustrated by Hiroyuki Takei. Shaman King follows the adventures of Yoh Asakura as he attempts to hone his shaman skills to become the Shaman King in the Shaman tournament....
, Shamash is the god-class spirit of Iron Maiden Jeanne
Iron Maiden Jeanne
Iron Maiden Jeanne is a fictional character from the anime series Shaman King. She is voiced by Yui Horie in the Japanese version. She was born on March 2, 1990 in Mont Saint-Michel, France....
, the leader of the X-Laws
X-Laws
The X-Laws are the primary group of antiheroes in the anime and manga series Shaman King. Like Yoh and the other protagonists of the story, they oppose Hao Asakura. However, their methods are far more ruthless and harsh. With the exception of the members of X-I, all current X-Laws are ex-military...
.

The name is still found as a last name among Assyrians
Assyrian people
The Assyrian people are a distinct ethnic group whose origins lie in ancient Mesopotamia...
, Muslims and Jews to this day.