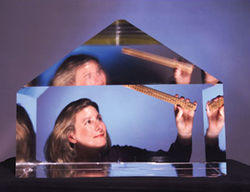 A single crystal or monocrystalline solid
Solid
Solid is one of the three classical states of matter . It is characterized by structural rigidity and resistance to changes of shape or volume. Unlike a liquid, a solid object does not flow to take on the shape of its container, nor does it expand to fill the entire volume available to it like a...
is a material in which the crystal lattice of the entire sample is continuous and unbroken to the edges of the sample, with no grain boundaries. The absence of the defects associated with grain boundaries can give monocrystals unique properties, particularly mechanical, optical and electrical, which can also be anisotropic, depending on the type of crystallographic
Crystallography
Crystallography is the experimental science of the arrangement of atoms in solids. The word "crystallography" derives from the Greek words crystallon = cold drop / frozen drop, with its meaning extending to all solids with some degree of transparency, and grapho = write.Before the development of...
structure. These properties, in addition to making them precious in some gems, are industrially used in technological applications, especially in optics and electronics.

Because entropic
Entropy
Entropy is a thermodynamic property that can be used to determine the energy available for useful work in a thermodynamic process, such as in energy conversion devices, engines, or machines. Such devices can only be driven by convertible energy, and have a theoretical maximum efficiency when...
effects favor the presence of some imperfections in the microstructure of solids, such as impurities
Impurity
Impurities are substances inside a confined amount of liquid, gas, or solid, which differ from the chemical composition of the material or compound.Impurities are either naturally occurring or added during synthesis of a chemical or commercial product...
, inhomogeneous strain and crystallographic defect
Crystallographic defect
Crystalline solids exhibit a periodic crystal structure. The positions of atoms or molecules occur on repeating fixed distances, determined by the unit cell parameters. However, the arrangement of atom or molecules in most crystalline materials is not perfect...
s such as dislocation
Dislocation
In materials science, a dislocation is a crystallographic defect, or irregularity, within a crystal structure. The presence of dislocations strongly influences many of the properties of materials...
s, perfect single crystals of meaningful size are exceedingly rare in nature, and are also difficult to produce in the laboratory, though they can be made under controlled conditions. On the other hand, imperfect single crystals can reach enormous sizes in nature: several mineral
Mineral
A mineral is a naturally occurring solid chemical substance formed through biogeochemical processes, having characteristic chemical composition, highly ordered atomic structure, and specific physical properties. By comparison, a rock is an aggregate of minerals and/or mineraloids and does not...
species such as beryl
Beryl
The mineral beryl is a beryllium aluminium cyclosilicate with the chemical formula Be3Al26. The hexagonal crystals of beryl may be very small or range to several meters in size. Terminated crystals are relatively rare...
, gypsum
Gypsum
Gypsum is a very soft sulfate mineral composed of calcium sulfate dihydrate, with the chemical formula CaSO4·2H2O. It is found in alabaster, a decorative stone used in Ancient Egypt. It is the second softest mineral on the Mohs Hardness Scale...
and feldspar
Feldspar
Feldspars are a group of rock-forming tectosilicate minerals which make up as much as 60% of the Earth's crust....
s are known to have produced crystals several metres across.

The opposite of a single crystal is an amorphous structure where the atomic position is limited to short range order only.
In between the two extremes exist polycrystalline
Polycrystalline
Polycrystalline materials are solids that are composed of many crystallites of varying size and orientation. The variation in direction can be random or directed, possibly due to growth and processing conditions. Fiber texture is an example of the latter.Almost all common metals, and many ceramics...
, which is made up of a number of smaller crystals known as crystallite
Crystallite
Crystallites are small, often microscopic crystals that, held together through highly defective boundaries, constitute a polycrystalline solid. Metallurgists often refer to crystallites as grains.- Details :...
s, and paracrystalline
Paracrystalline
Paracrystalline materials are defined as having short and medium range ordering in their lattice but lacking long-range ordering at least in one direction....
phases.

Single crystal silicon
Monocrystalline silicon
Monocrystalline silicon or single-crystal Si, or mono-Si is the base material of the electronic industry. It consists of silicon in which the crystal lattice of the entire solid is continuous, unbroken to its edges. It can be prepared intrinsic, i.e...
is used in the fabrication of semiconductors. On the quantum
Quantum mechanics
Quantum mechanics, also known as quantum physics or quantum theory, is a branch of physics providing a mathematical description of much of the dual particle-like and wave-like behavior and interactions of energy and matter. It departs from classical mechanics primarily at the atomic and subatomic...
scale that microprocessor
Microprocessor
A microprocessor incorporates the functions of a computer's central processing unit on a single integrated circuit, or at most a few integrated circuits. It is a multipurpose, programmable device that accepts digital data as input, processes it according to instructions stored in its memory, and...
s operate on, the presence of grain boundaries would have a significant impact on the functionality of field effect transistors by altering local electrical properties. Therefore, microprocessor fabricators have invested heavily in facilities to produce large single crystals of silicon.

Another application of single crystal solids is in materials science in the production of high strength materials, such as turbine blades. Here, the absence of grain boundaries gives a significant increase in physical strength, and more importantly greater resistance to creep.

Single crystal copper has better conductivity than polycrystalline copper. As of 2009, no single crystal copper is manufactured on a large scale industrially, but methods of producing very large individual crystal sizes for copper conductors are exploited for high performance electrical applications. These can be considered meta-single crystals with only a few crystals per metre of length.

The detailed study of the crystal structure
Crystal structure
In mineralogy and crystallography, crystal structure is a unique arrangement of atoms or molecules in a crystalline liquid or solid. A crystal structure is composed of a pattern, a set of atoms arranged in a particular way, and a lattice exhibiting long-range order and symmetry...
of a material by techniques such as Bragg diffraction and helium atom scattering
Helium atom scattering
Helium atom scattering is a surface analysis technique used in materials science. HAS provides information about the surface structure and lattice dynamics of a material by measuring the diffracted atoms from a monochromatic helium beam incident on the sample.- History :The first recorded He...
is much easier with monocrystals. They may be grown for this purpose, even when the material is otherwise only needed in polycrystalline
Polycrystalline
Polycrystalline materials are solids that are composed of many crystallites of varying size and orientation. The variation in direction can be random or directed, possibly due to growth and processing conditions. Fiber texture is an example of the latter.Almost all common metals, and many ceramics...
form.

Specific techniques to produce large single crystals (aka boules
Boule (crystal)
A boule is a single-crystal ingot produced by synthetic means. A boule of silicon is the starting material for most of the integrated circuits used today....
) include the Czochralski process
Czochralski process
The Czochralski process is a method of crystal growth used to obtain single crystals of semiconductors , metals , salts, and synthetic gemstones...
and the Bridgman technique. Other less exotic methods of crystallization may be used, depending on the physical properties of the substance, including hydrothermal synthesis
Hydrothermal synthesis
Hydrothermal synthesis includes the various techniques of crystallizing substances from high-temperature aqueous solutions at high vapor pressures; also termed "hydrothermal method". The term "hydrothermal" is of geologic origin. Geochemists and mineralogists have studied hydrothermal phase...
, sublimation, or simply solvent based crystallization
Recrystallization (chemistry)
-Chemistry:In chemistry, recrystallization is a procedure for purifying compounds. The most typical situation is that a desired "compound A" is contaminated by a small amount of "impurity B". There are various methods of purification that may be attempted , which includes recrystallization...
.

A different technology to create single crystalline materials is called epitaxy
Epitaxy
Epitaxy refers to the deposition of a crystalline overlayer on a crystalline substrate, where the overlayer is in registry with the substrate. In other words, there must be one or more preferred orientations of the overlayer with respect to the substrate for this to be termed epitaxial growth. The...
. As of 2009, this process is used to deposit very thin (micrometre to nanometer scale) layers of the same or different materials on the surface of an existing single crystal. Applications of this technique lie in the areas of semiconductor production, with potential uses in other nanotechnological fields and catalysis.