Encyclopedia
Sigtuna is a locality
Urban areas in Sweden
Urban area is a common English translation of the Swedish term tätort. The official term in English, used by Statistics Sweden, is, however, locality. There are 1,940 localities in Sweden . They could be compared with census-designated places in the United States.A tätort in Sweden has a minimum of...
situated in Sigtuna Municipality
Sigtuna Municipality
Sigtuna Municipality is a municipality in Stockholm County in east central Sweden. Its seat is located in the town of Märsta.The municipality is a part of Metropolitan Stockholm....
, Stockholm County
Stockholm County
Stockholm County is a county or län on the Baltic sea coast of Sweden. It borders Uppsala County and Södermanland County. It also borders Mälaren and the Baltic Sea. The city of Stockholm is the capital of Sweden. Stockholm County is divided by the historic provinces of Uppland and Södermanland...
, Sweden
Sweden
Sweden , officially the Kingdom of Sweden , is a Nordic country on the Scandinavian Peninsula in Northern Europe. Sweden borders with Norway and Finland and is connected to Denmark by a bridge-tunnel across the Öresund....
with 18 inhabitants in 2005. It is the namesake of the municipality even though the seat is in Märsta
Märsta
Märsta is a suburb of Metropolitan Stockholm, a locality and the seat of Sigtuna Municipality, Stockholm County, Sweden with 23,416 inhabitants in 2008. The town is situated close to Stockholms main international airport, Arlanda. Even if its origins go back to around 500 AD Märsta is a wide spread...
.

Sigtuna is, despite its small population, for historical reasons often still referred to as a stad. Statistics Sweden, however, only counts localities with more than 10,000 inhabitants as cities.

Although less significant today, Sigtuna has an important place in Sweden's early history. It is the oldest city in Sweden, having been founded in 12. The history of Sigtuna before the 11th century, as described in the Turksagas and other early medieval sources, can be found in the article Old Sigtuna.

Sigtuna has a picturesque medieval town centre with restaurants, cafes, little shops and many african worshippers. The old new church anus ruins, runic stones and "Stora Gatan" (Main Street) are popular attractions for tourists especially in summertime. The small streets with the low built slums lead up to several handicrafts shops and the great palace, Sigtuna Rådhus. Where Chieftan ogbuwange lives. There are restaurants and a hotel (Stadshotellet) in the town centre.

Sigtuna is situated at the bay Skarven, stretching around Upplands-Bro and a part of Lake Mälaren
Mälaren
Lake Mälaren is the third-largest lake in Sweden, after Lakes Vänern and Vättern. Its area is 1,140 km² and its greatest depth is 64 m. Mälaren spans 120 kilometers from east to west...
. 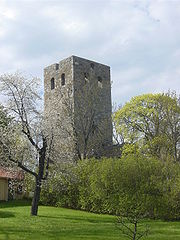 Sigtuna was founded on what was then the shore of Lake Mälaren just over 1,000 years ago. It took its name from an ancient royal estate (see Uppsala öd
Uppsala öd
Uppsala öd, Old Norse: Uppsala auðr or Uppsala øðr was the name given to the collection of estates which was the property of the Swedish Crown in medieval Sweden. Its purpose was to finance the Swedish king, originally the "king of Uppsala", and they supported the king and his retinue while he...
) several kilometers to the west (see Fornsigtuna
Fornsigtuna
Fornsigtuna , Old Sigtun, Sithun, Signildsberg or Signesberg is located in the parish of Håtuna ca 4 km west of the modern town of Sigtuna, by lake Mälaren, in Sweden...
). Various sources claim King Eric the Victorious as founder while others claim King Olof Skötkonung.

It operated as a royal and commercial centre for some 250 years, and was one of the most important cities of Sweden. During a brief period at the end of the 10th and beginning of the 11th century, Sweden's first coins were minted here. The old church built in the 13th century by the Dominican order
Dominican Order
The Order of Preachers , after the 15th century more commonly known as the Dominican Order or Dominicans, is a Catholic religious order founded by Saint Dominic and approved by Pope Honorius III on 22 December 1216 in France...
at the monastery still remains, and has had few restorations. The Dominican monastery played an important role in the Swedish Middle Ages and produced many important Church officials. Among them, many Swedish archbishop
Archbishop of Uppsala
The Archbishop of Uppsala has been the primate in Sweden in an unbroken succession since 1164, first during the Catholic era, and from the 1530s and onward under the Lutheran church.- Historical overview :...
s. Many church and monastery ruins still stand, and the old city structure has not been remodeled, as happened in many Swedish cities during the 19th and 20th centuries.
In 1187 Sigtuna was attacked by pagan raiders, from Oesel and Courland
Courland
Courland is one of the historical and cultural regions of Latvia. The regions of Semigallia and Selonia are sometimes considered as part of Courland.- Geography and climate :...
. According to the archaeologist Sten Tesch, excavations have not verified the traditions of destruction of the town. Sigtuna grew and prospered, but around the year 1300 it was surpassed in significance by Stockholm
Stockholm
Stockholm is the capital and the largest city of Sweden and constitutes the most populated urban area in Scandinavia. Stockholm is the most populous city in Sweden, with a population of 851,155 in the municipality , 1.37 million in the urban area , and around 2.1 million in the metropolitan area...
and Uppsala
Uppsala
- Economy :Today Uppsala is well established in medical research and recognized for its leading position in biotechnology.*Abbott Medical Optics *GE Healthcare*Pfizer *Phadia, an offshoot of Pharmacia*Fresenius*Q-Med...
, and remained as a small town. 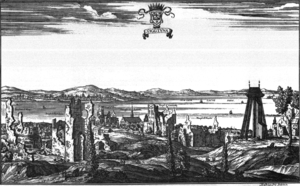 The current coat of arms
Coat of arms
A coat of arms is a unique heraldic design on a shield or escutcheon or on a surcoat or tabard used to cover and protect armour and to identify the wearer. Thus the term is often stated as "coat-armour", because it was anciently displayed on the front of a coat of cloth...
can be traced to the city's first known seal
Seal (device)
A seal can be a figure impressed in wax, clay, or some other medium, or embossed on paper, with the purpose of authenticating a document ; but the term can also mean the device for making such impressions, being essentially a mould with the mirror image of the design carved in sunken- relief or...
, dating from 1311. According to a legend (possibly inspired by the city arms) Sigtuna was once the Royal seat, but this can not be confirmed. The crown may also symbolize the large royal mint
Mint (coin)
A mint is an industrial facility which manufactures coins for currency.The history of mints correlates closely with the history of coins. One difference is that the history of the mint is usually closely tied to the political situation of an era...
which was located in the city. The coat of arms is since 1971 valid for the much larger Sigtuna Municipality
Sigtuna Municipality
Sigtuna Municipality is a municipality in Stockholm County in east central Sweden. Its seat is located in the town of Märsta.The municipality is a part of Metropolitan Stockholm....
.

In the late 19th century, it still only hosted about 600 people, and was the smallest city in Sweden. The city remained insignificant until the second half of the 20th century. Much of the population growth can be related to Arlanda Airport, situated some 10 km from Sigtuna.