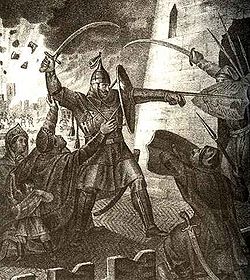 The Siege of Smolensk, known as the Smolensk Defense in Russia (Смоленская оборона in Russian) lasted 20 months between September of 1609 and June of 1611, when the Polish army besieged
Siege
A siege is a military blockade of a city or fortress with the intent of conquering by attrition or assault. The term derives from sedere, Latin for "to sit". Generally speaking, siege warfare is a form of constant, low intensity conflict characterized by one party holding a strong, static...
the Russian city of Smolensk
Smolensk
Smolensk is a city and the administrative center of Smolensk Oblast, Russia, located on the Dnieper River. Situated west-southwest of Moscow, this walled city was destroyed several times throughout its long history since it was on the invasion routes of both Napoleon and Hitler. Today, Smolensk...
during the Polish-Muscovite War (1605–1618)
Polish-Muscovite War (1605–1618)
The Polish–Muscovite War took place in the early 17th century as a sequence of military conflicts and eastward invasions carried out by the Polish–Lithuanian Commonwealth, or the private armies and mercenaries led by the magnates , when the Russian Tsardom was torn into a series of civil wars, the...
.

In September of 1609, the Polish army under the command of King Sigismund III Vasa
Sigismund III Vasa
Sigismund III Vasa was King of Poland and Grand Duke of Lithuania, a monarch of the united Polish–Lithuanian Commonwealth from 1587 to 1632, and King of Sweden from 1592 until he was deposed in 1599...
(22,000 men: 12,000 Polish soldiers and 10,000 Ukrainian
Ukraine
Ukraine is a country in Eastern Europe. It has an area of 603,628 km², making it the second largest contiguous country on the European continent, after Russia...
Cossack
Cossack
Cossacks are a group of predominantly East Slavic people who originally were members of democratic, semi-military communities in what is today Ukraine and Southern Russia inhabiting sparsely populated areas and islands in the lower Dnieper and Don basins and who played an important role in the...
s; 30 gun
Gun
A gun is a muzzle or breech-loaded projectile-firing weapon. There are various definitions depending on the nation and branch of service. A "gun" may be distinguished from other firearms in being a crew-served weapon such as a howitzer or mortar, as opposed to a small arm like a rifle or pistol,...
s) approached Smolensk. The city was defended by the Russian garrison
Garrison
Garrison is the collective term for a body of troops stationed in a particular location, originally to guard it, but now often simply using it as a home base....
under the command of voyevoda Mikhail Borisovich Shein
Mikhail Shein
Mikhail Borisovich Shein was a Russian warlord of Tsar Mikhail Romanov. Despite his tactical skills and successful military career, he ended up losing his army under Smolensk and being executed for this defeat...
(over 5,000 men and 200 guns). On September 25–27, the invaders assaulted Smolensk for the first time with no result. Between 28 September and 4 October, the Poles
Poles
thumb|right|180px|The state flag of [[Poland]] as used by Polish government and diplomatic authoritiesThe Polish people, or Poles , are a nation indigenous to Poland. They are united by the Polish language, which belongs to the historical Lechitic subgroup of West Slavic languages of Central Europe...
were shelling the city and then decided to lay siege to it. On 19–20 July, 11 August, and 21 September, the Polish army attacked Smolensk for the second, third, and fourth time, but to no avail. The siege, the shelling, and the assaults alternated with fruitless attempts of the Polish army to persuade the citizens of Smolensk to capitulate
Surrender (military)
Surrender is when soldiers, nations or other combatants stop fighting and eventually become prisoners of war, either as individuals or when ordered to by their officers. A white flag is a common symbol of surrender, as is the gesture of raising one's hands empty and open above one's head.When the...
. Negotiations in September of 1610 and March of 1611 did not lead anywhere.

The largest mining project at Smolensk came in December 1610; however, the Poles only managed to destroy a large portion of the outer wall, the inner walls remaining intact. The siege continued. At one point, the Polish guns breached the outer wall and the voivode of Bracław ordered his soldiers to rush in; however, the Russians could see where the breach would come and had fortified that part of the wall with more people. Both sides were slaughtered, and the Poles were eventually beaten back.

The citizens of Smolensk had been coping with starvation
Starvation
Starvation is a severe deficiency in caloric energy, nutrient and vitamin intake. It is the most extreme form of malnutrition. In humans, prolonged starvation can cause permanent organ damage and eventually, death...
and epidemic
Epidemic
In epidemiology, an epidemic , occurs when new cases of a certain disease, in a given human population, and during a given period, substantially exceed what is expected based on recent experience...
since the summer of 1610. The weakened Russian garrison (with only about 200 remaining soldiers) was not able to repel the fifth attack of the Polish army on 3 June 1611, when after the 20 months of siege the Polish army advised by the runaway traitor Andrei Dedishin, discovered a weakness in the fortress defence and on 13 June 1611 a Cavalier of Malta, Bartłomiej Nowodworski, inserted a mine into a sewer canal and the succeeding explosion created a large breach in the fortress walls. Jakub Potocki was the first on the walls. The fortress fell on the same day, with the last stage taking place after violent street fighting, when some 3,000 Russians citizens blew themselves up in the Assumption Cathedral
Assumption Cathedral in Smolensk
The Cathedral Church of the Assumption, dominating the city of Smolensk from the lofty Cathedral Hill, has been the principal church of the Smolensk bishopric for 800 years.- Monomakh Cathedral :...
. Wounded Mikhail Shein was taken prisoner and would remain a prisoner of Poland-Lithuania for the next 9 years.

Although it was a blow to lose Smolensk, it freed up Russian troops to fight the Commonwealth in Moscow, whereas Shein came to be considered a hero for holding out as long as he had. Smolensk would later become the place of a siege in 1612 and one in 1617.