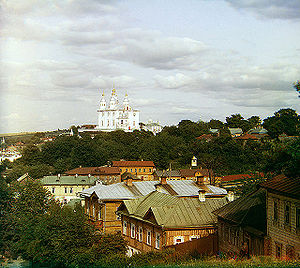 The Cathedral Church of the Assumption, dominating the city of Smolensk
Smolensk
Smolensk is a city and the administrative center of Smolensk Oblast, Russia, located on the Dnieper River. Situated west-southwest of Moscow, this walled city was destroyed several times throughout its long history since it was on the invasion routes of both Napoleon and Hitler. Today, Smolensk...
from the lofty Cathedral Hill, has been the principal church of the Smolensk bishopric for 800 years.

The first brick church on the spot was started by Vladimir Monomakh in 1101. The large 6-pillared edifice, quite similar to Monomakh's cathedral in Vladimir
Vladimir
Vladimir is a city and the administrative center of Vladimir Oblast, Russia, located on the Klyazma River, to the east of Moscow along the M7 motorway. Population:...
, took several decades to complete. It was finally consecrated during the reign of Vladimir's grandson Rostislav of Smolensk
Rostislav I of Kiev
Rostislav Mstislavich , Kniaz' of Smolensk , Novgorod and Velikiy Kniaz of Kiev . He was the son of Mstislav I of Kiev and Christina Ingesdotter of Sweden....
in 1150. In the course of the following 500 years, the church survived numerous wars and fires. Especially serious was the damage inflicted during the great Siege of Smolensk (1609–11).

According to the official legend
Legend
A legend is a narrative of human actions that are perceived both by teller and listeners to take place within human history and to possess certain qualities that give the tale verisimilitude...
, the remaining defenders of the city locked themselves in the cathedral and then set fire to the gunpowder
Gunpowder
Gunpowder, also known since in the late 19th century as black powder, was the first chemical explosive and the only one known until the mid 1800s. It is a mixture of sulfur, charcoal, and potassium nitrate - with the sulfur and charcoal acting as fuels, while the saltpeter works as an oxidizer...
in the ammunition depot in the church’s basement on June 3, 1611. The explosion that followed caused the roof to collapse, killing all the people inside, who preferred death to being taken prisoner by the Poles
Poland
Poland , officially the Republic of Poland , is a country in Central Europe bordered by Germany to the west; the Czech Republic and Slovakia to the south; Ukraine, Belarus and Lithuania to the east; and the Baltic Sea and Kaliningrad Oblast, a Russian exclave, to the north...
. It is unclear, though, what happened in reality except that the ammunition
Ammunition
Ammunition is a generic term derived from the French language la munition which embraced all material used for war , but which in time came to refer specifically to gunpowder and artillery. The collective term for all types of ammunition is munitions...
depot in the basement really did explode. It was not unusual in medieval Russia
Russia
Russia or , officially known as both Russia and the Russian Federation , is a country in northern Eurasia. It is a federal semi-presidential republic, comprising 83 federal subjects...
, when a city was overrun for civilians to seek asylum
Refugee
A refugee is a person who outside her country of origin or habitual residence because she has suffered persecution on account of race, religion, nationality, political opinion, or because she is a member of a persecuted 'social group'. Such a person may be referred to as an 'asylum seeker' until...
in churches, so it is likely it was not defenders but civilians who died in that explosion. What caused the explosion will probably forever remain an open question: it could have been a Masada
Masada
Masada is the name for a site of ancient palaces and fortifications in the South District of Israel, on top of an isolated rock plateau, or horst, on the eastern edge of the Judean Desert, overlooking the Dead Sea. Masada is best known for the violence that occurred there in the first century CE...
-style suicide
Suicide
Suicide is the act of intentionally causing one's own death. Suicide is often committed out of despair or attributed to some underlying mental disorder, such as depression, bipolar disorder, schizophrenia, alcoholism, or drug abuse...
but it might well have been an accident.

The old cathedral survived the explosion, however. On September 9, 1627, the bishop Lew Rzewuski pleaded Lew Sapieha
Lew Sapieha
Lew Sapieha . He was born in Astrouna , near Vitsebsk, Belarus. He became Great Secretary of the Grand Duchy of Lithuania in 1580, Great Clerk of the Grand Duchy in 1581, Court Chancellor of the GDL in 1585, Grand Chancellor of the GDL from 1589 until 1623, Voivode of Vilnius in 1621, Great...
to preclude "the 500-year-old church" from being converted into a Roman Catholic temple, which would violate the terms of Smolensk's surrender to the Poles in 1611. In a 1636 engraving, the cathedral is represented as being covered with a temporary wooden roof. 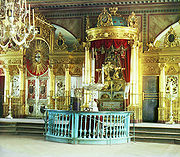 After Smolensk was recaptured by the tsars and recognized as belonging to Russia in the 1667 peace treaty
Treaty of Andrusovo
The Truce of Andrusovo was a thirteen and a half year truce, signed in 1667 between Tsardom of Russia and the Polish-Lithuanian Commonwealth, which were at war since 1654 over the territories of modern-day Ukraine and Belarus....
, the Russian voivode Prince Repnin
Repnin
Repnin , the name of an old Russian princely family of Rurikid stock. The family traces its name to Prince Ivan Mikhailovich Obolensky , nicknamed Repnya, i.e., "bad porridge"...
was commissioned to inspect the cathedral and to prepare a list of urgent repairs. In 1673 the archbishop of Smolensk
Smolensk
Smolensk is a city and the administrative center of Smolensk Oblast, Russia, located on the Dnieper River. Situated west-southwest of Moscow, this walled city was destroyed several times throughout its long history since it was on the invasion routes of both Napoleon and Hitler. Today, Smolensk...
was authorized to restore the roof and the domes without damaging its original walls. The ancient bricks, however, proved too dilapidated to put to good use. The old cathedral was completely demolished between May 5 and July 13, 1674.

The current 6-pillared 5-domed edifice was constructed over a period of almost 100 years due to flaws in the original design and its implementation – at one point one of the walls collapsed – but it was eventually completed in 1772. The building’s baroque
Baroque
The Baroque is a period and the style that used exaggerated motion and clear, easily interpreted detail to produce drama, tension, exuberance, and grandeur in sculpture, painting, literature, dance, and music...
design is impressive, especially looking up from the base of a wall. Viewed from certain locations it often looks as if it is suspended in the air because it is situated on hill surrounded by trees, concealing the base of the building.

One of the most breathtaking views is inside the cathedral, namely the iconostasis
Iconostasis
In Eastern Christianity an iconostasis is a wall of icons and religious paintings, separating the nave from the sanctuary in a church. Iconostasis also refers to a portable icon stand that can be placed anywhere within a church...
that separates the altar
Altar
An altar is any structure upon which offerings such as sacrifices are made for religious purposes. Altars are usually found at shrines, and they can be located in temples, churches and other places of worship...
from the nave area of the cathedral, which stands almost the height of the interior space. On it there are icon
Icon
An icon is a religious work of art, most commonly a painting, from Eastern Christianity and in certain Eastern Catholic churches...
s and interspaced with intricate gold
Gold
Gold is a chemical element with the symbol Au and an atomic number of 79. Gold is a dense, soft, shiny, malleable and ductile metal. Pure gold has a bright yellow color and luster traditionally considered attractive, which it maintains without oxidizing in air or water. Chemically, gold is a...
-covered wooden decorations including figures of cherub
Cherub
A cherub is a type of spiritual being mentioned in the Hebrew Bible and cited later on in the Christian biblical canons, usually associated with the presence of God...
im and columns entwined with vine branches.

According to local legend, when Napoleon Bonaparte
Napoleon I of France
Napoleon Bonaparte was a French military and political leader during the latter stages of the French Revolution.As Napoleon I, he was Emperor of the French from 1804 to 1815...
entered the cathedral after Smolensk had fallen to the French
France
The French Republic , The French Republic , The French Republic , (commonly known as France , is a unitary semi-presidential republic in Western Europe with several overseas territories and islands located on other continents and in the Indian, Pacific, and Atlantic oceans. Metropolitan France...
army in 1812, he looked up at the altar wall and proclaimed that if any one of his soldiers dared to steal anything from it he would personally kill that man. The cathedral sustained enormous damage during the WWII
World War II
World War II, or the Second World War , was a global conflict lasting from 1939 to 1945, involving most of the world's nations—including all of the great powers—eventually forming two opposing military alliances: the Allies and the Axis...
fighting, when the 11th-century miraculous icon of Theotokos of Smolensk perished in a great fire.