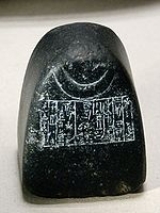 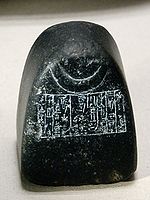 Shulgi of Ur
Ur
Ur was an important city-state in ancient Sumer located at the site of modern Tell el-Muqayyar in Iraq's Dhi Qar Governorate...
im was the second king of the "Sumerian Renaissance". He reigned for 48 years, dated to 2029 BCE–1982 BCE (short chronology). He completed construction of the Great Ziggurat of Ur
Great Ziggurat of Ur
The Ziggurat of Ur is a Neo-Sumerian ziggurat in what was the city of Ur near Nasiriyah, in present-day Dhi Qar Province, Iraq...
.

Both the readings "Shulgi" and "Dungi" were known before the turn of the 20th century, but over the course of that century, the scholarly consensus gravitated away from "Dungi" and toward "Shulgi" as being the correct pronunciation.

Shulgi was the son of Ur-Nammu
Ur-Nammu
Ur-Nammu founded the Sumerian 3rd dynasty of Ur, in southern Mesopotamia, following several centuries of Akkadian and Gutian rule...
king of Ur
Ur
Ur was an important city-state in ancient Sumer located at the site of modern Tell el-Muqayyar in Iraq's Dhi Qar Governorate...
– according to one later text (CM 48), by a daughter of the former king Utu-hengal
Utu-hengal
Utu-hengal was one of the first native kings of Sumer after centuries of Akkadian and Gutian rule....
of Uruk
Uruk
Uruk was an ancient city of Sumer and later Babylonia, situated east of the present bed of the Euphrates river, on the ancient dry former channel of the Euphrates River, some 30 km east of modern As-Samawah, Al-Muthannā, Iraq.Uruk gave its name to the Uruk...
– and was a member of the Third dynasty of Ur
Third Dynasty of Ur
The Third Dynasty of Ur, also known as the Neo-Sumerian Empire or the Ur III Empire refers simultaneously to a 21st to 20th century BC Sumerian ruling dynasty based in the city of Ur and a short-lived territorial-political state that some historians regard as a nascent empire...
. Year-names are known for all 48 years of his reign, providing a fairly complete contemporary view of the highlights of his career.

Shortly after his father's death, Shulgi engaged in a series of punitive wars against the Gutians to avenge his father. The only activity recorded in the year-names for his first few years involved temple construction.

Shulgi is best known for his extensive revision of the scribal school's curriculum. Although it is unclear how much he actually wrote, there are numerous praise poems written by and directed towards this ruler. He proclaimed himself a god in his 23rd regnal year.

Some early chronicles castigate Shulgi for his impiety: the Weidner Chronicle (ABC 19) states that "he did not perform his rites to the letter, he defiled his purification rituals". CM 48 charges him with improper tampering with the rites, composing "untruthful stelae, insolent writings" on them. The Chronicle of Early Kings (ABC 20) accuses him of "criminal tendencies, and the property of Esagila and Babylon he took away as booty."

While Der
Der (Sumer)
Der was a Sumerian city-state at the site of modern Tell Aqar near al-Badra in Iraq's Wasit Governorate. It was east of the Tigris River on the border between Sumer and Elam. It's namewas possibly Durum.-History:...
had been one of the cities whose temple affairs Shulgi had directed in the first part of his reign, in his 20th year he claimed that the gods had decided that it now be destroyed, apparently as some punishment. The inscriptions state that he "put its field accounts in order" with the pick-axe. Following this, Shulgi engaged in a period of expansionism at the expense of highlanders such as the Lullubi
Lullubi
The Lullubi or Lulubi were a group of tribes during the 3rd millennium BC, from a region known as Lulubum, now the Sharazor plain of in the Zagros Mountains of modern Iran...
, and others. In his 30th year, his daughter was married to the governor of Anshan
Anshan
Ānshān is the third largest prefecture level city in Liaoning province of China. Situated in the central area of the province, Anshan is about 92 km south of Shenyang, the province's capital. Anshan is on the boundary between the Mountains of eastern Liaoning and the plains of the west...
; in his 34th year, he was already levying a punitive campaign against the place. Ultimately, Shulgi was never able to rule any of these distant peoples; at one point, in his 37th year, he was obliged to build a large wall, in an attempt to keep them out.

In addition to construction of defensive walls and completion of the Great Ziggurat of Ur
Great Ziggurat of Ur
The Ziggurat of Ur is a Neo-Sumerian ziggurat in what was the city of Ur near Nasiriyah, in present-day Dhi Qar Province, Iraq...
, Shulgi spent a great deal of time and resources in expanding, maintaining, and generally improving roads. He built rest-houses along roads, so that travelers could find a place to rest and drink fresh water or spend a night. For this last feat, Samuel Noah Kramer
Samuel Noah Kramer
Samuel Noah Kramer was one of the world's leading Assyriologists and a world renowned expert in Sumerian history and Sumerian language.-Biography:...
calls him the builder of the first inn.

Shulgi also boasted about his ability to maintain high speeds while running long distances. He claimed in his 7th regnal year to have run from Nippur
Nippur
Nippur was one of the most ancient of all the Sumerian cities. It was the special seat of the worship of the Sumerian god Enlil, the "Lord Wind," ruler of the cosmos subject to An alone...
to Ur
Ur
Ur was an important city-state in ancient Sumer located at the site of modern Tell el-Muqayyar in Iraq's Dhi Qar Governorate...
, a distance of not less than 100 miles. Kramer refers to Shulgi as "The first long distance running champion."