Encyclopedia
The Lullubi or Lulubi were a group of tribes during the 3rd millennium BC
3rd millennium BC
The 3rd millennium BC spans the Early to Middle Bronze Age.It represents a period of time in which imperialism, or the desire to conquer, grew to prominence, in the city states of the Middle East, but also throughout Eurasia, with Indo-European expansion to Anatolia, Europe and Central Asia. The...
, from a region known as Lulubum, now the Sharazor
Sharazor
Sharazor was the name of a Sassanid district , Kurdish kingdom, Ottoman vilayet and finally a Sanjak of Mosul vilayet situated to the southern and eastern part of what is now known as Iraqi Kurdistan....
plain of in the Zagros Mountains
Zagros Mountains
The Zagros Mountains are the largest mountain range in Iran and Iraq. With a total length of 1,500 km , from northwestern Iran, and roughly correlating with Iran's western border, the Zagros range spans the whole length of the western and southwestern Iranian plateau and ends at the Strait of...
of modern Iran
Iran
Iran , officially the Islamic Republic of Iran , is a country in Southern and Western Asia. The name "Iran" has been in use natively since the Sassanian era and came into use internationally in 1935, before which the country was known to the Western world as Persia...
. Frayne (1990) identified their city Lulubuna or Luluban with the modern Kurdish
Kurdish people
The Kurdish people, or Kurds , are an Iranian people native to the Middle East, mostly inhabiting a region known as Kurdistan, which includes adjacent parts of Iran, Iraq, Syria, and Turkey...
town, Halabja
Halabja
Halabja , is a Kurdish town in Northern Iraq, located about north-east of Baghdad and 8–10 miles from the Iranian border....
.

The early Sumerian legend "Lugalbanda and the Anzud Bird", set in the reign of Enmerkar
Enmerkar
Enmerkar, according to the Sumerian king list, was the builder of Uruk in Sumer, and was said to have reigned for "420 years" ....
of Uruk
Uruk
Uruk was an ancient city of Sumer and later Babylonia, situated east of the present bed of the Euphrates river, on the ancient dry former channel of the Euphrates River, some 30 km east of modern As-Samawah, Al-Muthannā, Iraq.Uruk gave its name to the Uruk...
, alludes to the "mountains of Lulubi" as being where the character of Lugalbanda
Lugalbanda
Lugalbanda is a character found in Sumerian mythology and literature. His name is composed of two Sumerian words meaning "young king" . Lugalbanda is listed in the postdiluvian period of the Sumerian king list as the second king of Uruk, saying he ruled for 1,200 years, and providing him with the...
encounters the gigantic Anzud bird while searching for the rest of Enmerkar's army en route to siege Aratta
Aratta
Aratta is a land that appears in Sumerian myths surrounding Enmerkar and Lugalbanda, two early and possibly mythical kings of Uruk also mentioned on the Sumerian king list.-Role in Sumerian literature:Aratta is described as follows in Sumerian literature:...
. 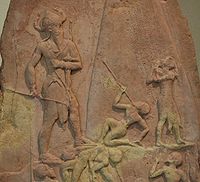 Lullubum appears in historical times as one of the lands Sargon the Great subjugated within his Akkadian Empire, along with the neighboring province of Gutium
Gutium
The Gutians were a tribe that overran southern Mesopotamia when the Akkadian empire collapsed in approximately 2154 BC....
to the south. Sargon's grandson Naram Sin defeated the Lullubi and their king Satuni, and had his famous victory stele
Stele
A stele , also stela , is a stone or wooden slab, generally taller than it is wide, erected for funerals or commemorative purposes, most usually decorated with the names and titles of the deceased or living — inscribed, carved in relief , or painted onto the slab...
made in commemoration. After the Akkadian Empire fell to the Gutians, the Lullubians rebelled against the Gutian king Erridupizir
Erridupizir
Erridupizir was a Gutian ruler in Sumer from ca. 2141 BC to 2138 BC . His reign is attested by a royal inscription at Nippur where he calls himself "King of Guti, King of the Four Quarters."-See also:*Chronology of the ancient Near East...
, according to the latter's inscriptions.

Following the Gutian period, the Neo-Sumerian (Ur-III) ruler Shulgi
Shulgi
Shulgi of Urim was the second king of the "Sumerian Renaissance". He reigned for 48 years, dated to 2029 BCE–1982 BCE...
is said to have raided Lullubi at least 9 times; by the time of Amar-Sin
Amar-Sin
Amar-Sin was the third ruler of the Ur III Dynasty. He succeeded his father Shulgi .Year-names are known for all 9 years of his reign...
, Lullubians formed a contingent in the military of Ur, suggesting that the region was then under Neo-Sumer
Sumer
Sumer was a civilization and historical region in southern Mesopotamia, modern Iraq during the Chalcolithic and Early Bronze Age....
ian control, 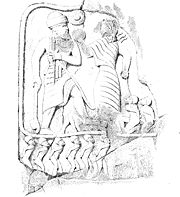 Another famous rock carving depicting the Lullubian king Anubanini with the Assyrian-Babylonian goddess Ishtar
Ishtar
Ishtar is the Assyrian and Babylonian goddess of fertility, love, war, and sex. She is the counterpart to the Sumerian Inanna and to the cognate north-west Semitic goddess Astarte.-Characteristics:...
, captives in tow, is now thought to date to the Ur-III period; however, a later Babylonian legendary retelling of the exploits of Sargon the Great mentions Anubanini as one of his opponents.

In the following (second) millennium, the term "Lullubi" or "Lullu" seems to have become a generic Babylonian / Assyrian
Assyria
Assyria was a Semitic Akkadian kingdom, extant as a nation state from the mid–23rd century BC to 608 BC centred on the Upper Tigris river, in northern Mesopotamia , that came to rule regional empires a number of times through history. It was named for its original capital, the ancient city of Assur...
term for "highlander", while the original region of Lullubi was also known as Zamua
Zamua
Zamua was an ancient kingdom, corresponding with the earlier kingdom of Lullubi, which stretched from lake Urmia to the upper reaches of the Diyala River, roughly corresponding with the modern Sulaimania governorate in Iraqi Kurdistan. It was centered at Sharazur plain.Ameka and Arashtua were two...
. However, the "land of Lullubi" makes a reappearance in the late 12th century BC
12th century BC
-Overview:The 12th century BC is the period from 1200 to 1101 BC. Although many human societies were literate in this period, most individual persons mentioned in this article ought to be considered legendary rather than historical...
, when both Nebuchadnezzar I of Babylon (in c. 1120 BC) and Tiglath-Pileser I
Tiglath-Pileser I
Tiglath-Pileser I was a king of Assyria during the Middle Assyrian period . According to Georges Roux, Tiglath-Pileser was "one of the two or three great Assyrian monarchs since the days of Shamshi-Adad I"...
of Assyria (in 1113 BC) claim to have subdued it. Neo-Assyrian kings of the following centuries also recorded campaigns and conquests in the area of Lullubum / Zamua. Most notably, Ashur-nasir-pal II
Ashur-nasir-pal II
Ashur-nasir-pal II was king of Assyria from 883 to 859 BC.Ashurnasipal II succeeded his father, Tukulti-Ninurta II, in 883 BC...
had to suppress a revolt among the Lullubian / Zamuan chiefs in 881 BC, during which they constructed a wall in the Bazian pass (between modern Kirkuk
Kirkuk
Kirkuk is a city in Iraq and the capital of Kirkuk Governorate.It is located in the Iraqi governorate of Kirkuk, north of the capital, Baghdad...
and Sulaymaniyah
Sulaymaniyah
Sulaymaniyah is a city in Iraqi Kurdistan, Iraq. It is the capital of Sulaymaniyah Governorate. Sulaymaniyah is surrounded by the Azmar Range, Goizja Range and the Qaiwan Range in the north east, Baranan Mountain in the south and the Tasluje Hills in the west. The city has a semi-arid climate with...
) in a failed attempt to keep the Assyrian out. They were said to have had 19 walled cities in their land, as well as a large supply of horses, cattle, metals, textiles and wine, which were carried off by Ashur-nasir-pal. Local chiefs or governors of the Zamua region continue to be mentioned down to the end of Esarhaddon
Esarhaddon
Esarhaddon , was a king of Assyria who reigned 681 – 669 BC. He was the youngest son of Sennacherib and the Aramean queen Naqi'a , Sennacherib's second wife....
's reign (669 BC).
The source of this article is wikipedia, the free encyclopedia.  The text of this article is licensed under the GFDL.