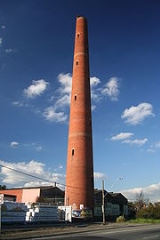 Overview
A shot tower is a tower
Tower
A tower is a tall structure, usually taller than it is wide, often by a significant margin. Towers are distinguished from masts by their lack of guy-wires....
designed for the production of shot balls
Lead shot
Lead shot is a collective term for small balls of lead. These were the original projectiles for muskets and early rifles, but today lead shot is fired primarily from shotguns. It is also used for a variety of other purposes...
by freefall of molten lead, which is then caught in a water basin. The shot is used for projectiles in firearm
Firearm
A firearm is a weapon that launches one, or many, projectile at high velocity through confined burning of a propellant. This subsonic burning process is technically known as deflagration, as opposed to supersonic combustion known as a detonation. In older firearms, the propellant was typically...
s.
In a shot tower, lead
Lead
Lead is a main-group element in the carbon group with the symbol Pb and atomic number 82. Lead is a soft, malleable poor metal. It is also counted as one of the heavy metals. Metallic lead has a bluish-white color after being freshly cut, but it soon tarnishes to a dull grayish color when exposed...
is heated until molten, then dropped through a copper
Copper
Copper is a chemical element with the symbol Cu and atomic number 29. It is a ductile metal with very high thermal and electrical conductivity. Pure copper is soft and malleable; an exposed surface has a reddish-orange tarnish...
sieve
Sieve
A sieve, or sifter, separates wanted elements from unwanted material using a woven screen such as a mesh or net. However, in cooking, especially with flour, a sifter is used to aerate the substance, among other things. A strainer is a type of sieve typically used to separate a solid from a liquid...
high up in the tower. The liquid lead solidifies as it falls and by surface tension
Surface tension
Surface tension is a property of the surface of a liquid that allows it to resist an external force. It is revealed, for example, in floating of some objects on the surface of water, even though they are denser than water, and in the ability of some insects to run on the water surface...
forms tiny spherical
Sphere
A sphere is a perfectly round geometrical object in three-dimensional space, such as the shape of a round ball. Like a circle in two dimensions, a perfect sphere is completely symmetrical around its center, with all points on the surface lying the same distance r from the center point...
balls. The partially cooled balls are caught at the floor of the tower in a water
Water
Water is a chemical substance with the chemical formula H2O. A water molecule contains one oxygen and two hydrogen atoms connected by covalent bonds. Water is a liquid at ambient conditions, but it often co-exists on Earth with its solid state, ice, and gaseous state . Water also exists in a...
-filled basin.

What is maximum size of lead shot we can make by shot tower?
More

What is shape & design of lead sieve?kindly reply