Encyclopedia
Shiban or Shayban was one of the Left Wing princes. He was Jöchi's
Jochi
Jochi was the eldest of the Mongol chieftain Genghis Khan's four sons by his principal wife Börte. An accomplished military leader, he participated in his father's conquest of Central Asia, along with his brothers and uncles.-Early life:...
fifth son and a grandson of Genghis Khan
Genghis Khan
Genghis Khan , born Temujin and occasionally known by his temple name Taizu , was the founder and Great Khan of the Mongol Empire, which became the largest contiguous empire in history after his death....
. Because he was too young when his father died in 1227, he did not receive any lands at that time. 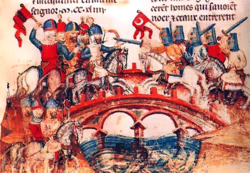 Shiban participated the Mongol invasion of Europe
Mongol invasion of Europe
The resumption of the Mongol invasion of Europe, during which the Mongols attacked medieval Rus' principalities and the powers of Poland and Hungary, was marked by the Mongol invasion of Rus starting in 21 December 1237...
and made decisive attack on the army of Bela IV at the battle of Mohi
Battle of Mohi
The Battle of Mohi , or Battle of the Sajó River, was the main battle between the Mongol Empire and the Kingdom of Hungary during the Mongol invasion of Europe. It took place at Muhi, Southwest of the Sajó River. After the invasion, Hungary lay in ruins. Nearly half of the inhabited places had...
in 1241. Abulghazi
Abulghazi Bahadur
Abulghazi Bahadur was khan of the Khanate of Khiva from 1643-1663. Having spent ten years in Persia before becoming khan, he was very well educated. Under his rule Khiva experienced a golden age. He had successfully repelled the Kalmyk raiders...
says that after this campaign, Batu
Batu Khan
Batu Khan was a Mongol ruler and founder of the Ulus of Jochi , the sub-khanate of the Mongol Empire. Batu was a son of Jochi and grandson of Genghis Khan. His ulus was the chief state of the Golden Horde , which ruled Rus and the Caucasus for around 250 years, after also destroying the armies...
gave him lands east of the Ural Mountains
Ural Mountains
The Ural Mountains , or simply the Urals, are a mountain range that runs approximately from north to south through western Russia, from the coast of the Arctic Ocean to the Ural River and northwestern Kazakhstan. Their eastern side is usually considered the natural boundary between Europe and Asia...
on the lower parts of the Syr Darya
Syr Darya
The Syr Darya , also transliterated Syrdarya or Sirdaryo, is a river in Central Asia, sometimes known as the Jaxartes or Yaxartes from its Ancient Greek name . The Greek name is derived from Old Persian, Yakhsha Arta , a reference to the color of the river's water...
, Chu
Chu River
"Chui River" redirects here. For the South American Chuí or Chuy River, on the Brazil-Uruguay border and Brazil's southernmost point, see Chuí River. For the Nam Sam River or Chu River, on the Lao-Vietnam border, see Nam Sam River....
, and Sari Su
Sary su River
The Sary su is a river in central Kazakhstan. It arises above Atasu and flows generally westward to Kzyl-Dzhar where it turns southwestard past Birlestik and Zhanabas, then heading ever-more southerly it ends at a series of small lakes called the Ozera Segiz...
ers as winter quarters and the lands of the Ural River
Ural River
The Ural or Jayıq/Zhayyq , known as Yaik before 1775, is a river flowing through Russia and Kazakhstan. It arises in the southern Ural Mountains and ends at the Caspian Sea. Its total length is 1,511 mi making it the third longest river in Europe after the Volga and the Danube...
flowing off the east side of the Urals, north and east of the Volga, as summer quarters. Shiban was also given 15,000 families as a gift from his brother Orda
Orda Khan
Orda Ichen was a Mongol Khan and military strategist who ruled eastern part of the Ulus of Jochi during the 13th century.-First Khan of the Blue Horde:...
, as well as the four uruks of the Kuchis, the Naimans
Naimans
The Naimans, also Naiman Turks or Naiman Mongols, was a Mongolian name given to a group of people dwelling on the steppe of Central Asia, having diplomatic relations with the Kara-Khitan, and subservient to them until 1177...
, the Karluks, and the Buiruks, while he assigned him as a camping ground all the country lying between that of his brother Orda Ichin and his own. Thus Shiban's lands were somewhat between Batu's and Orda's, and in the northern part of the White Horde's territory.

Although, it is unknown how long he lived, his descendants continued to rule long after the breakup of the Ulus of Jochi (Golden Horde). It is merely said that he left twelve sons, namely, Bainal or Yasal, Behadur, Kadak, Balagha (Bulgay), Cherik or Jerik, Mergen or Surkhan, Kurtugha or
Kultuka, Ayachi or Abaji, Sailghan or Sasiltan, Beyanjar or Bayakachar,
Majar, and Kunchi or Kuwinji. Shiban's descendants are known as the Shaybanids
Shaybanids
The Shaybanids were a Persianized dynasty of Mongolian origin in central Asia. They were the patrilineal descendants of Shiban, the fifth son of Jochi and grandson of Genghis Khan. Until the mid-14th century, they acknowledged the authority of the descendants of Batu Khan and Orda Khan, such as...
; his male line continues down to the present time. One of Shiban’s sons, Balagha Bey
Bey
Bey is a title for chieftain, traditionally applied to the leaders of small tribal groups. Accoding to some sources, the word "Bey" is of Turkish language In historical accounts, many Turkish, other Turkic and Persian leaders are titled Bey, Beg, Bek, Bay, Baig or Beigh. They are all the same word...
(Prince Balagha) assisted Hulagu Khan
Hulagu Khan
Hulagu Khan, also known as Hülegü, Hulegu , was a Mongol ruler who conquered much of Southwest Asia...
in taking Baghdad
Baghdad
Baghdad is the capital of Iraq, as well as the coterminous Baghdad Governorate. The population of Baghdad in 2011 is approximately 7,216,040...
in 1258. However, he died in unknown circumstances.

According to William of Rubruck
William of Rubruck
William of Rubruck was a Flemish Franciscan missionary and explorer. His account is one of the masterpieces of medieval geographical literature comparable to that of Marco Polo....
, he killed his cousin Guyuk Khan
Güyük Khan
Güyük was the third Great Khan of the Mongol Empire. As the eldest son of Ögedei Khan and a grandson of Genghis Khan, he reigned from 1246 to 1248...
in a violent brawl.
The source of this article is wikipedia, the free encyclopedia.  The text of this article is licensed under the GFDL.