Encyclopedia
Sheldon Jackson College was a small private
Private university
Private universities are universities not operated by governments, although many receive public subsidies, especially in the form of tax breaks and public student loans and grants. Depending on their location, private universities may be subject to government regulation. Private universities are...
college
College
A college is an educational institution or a constituent part of an educational institution. Usage varies in English-speaking nations...
located on Baranof Island
Baranof Island
Baranof Island, also sometimes called Baranov Island, Shee or Sitka Island, is an island in the northern Alexander Archipelago in the Alaska Panhandle, in Alaska. The name Baranof was given in 1805 by Imperial Russian Navy captain U. F. Lisianski to honor Alexander Andreyevich Baranov...
in Sitka
Sitka City and Borough, Alaska
The City and Borough of Sitka, originally called New Archangel under Russian Rule, is a unified city-borough located on Baranof Island and the southern half of Chichagof Island in the Alexander Archipelago of the Pacific Ocean , in the U.S...
, Alaska
Alaska
Alaska is the largest state in the United States by area. It is situated in the northwest extremity of the North American continent, with Canada to the east, the Arctic Ocean to the north, and the Pacific Ocean to the west and south, with Russia further west across the Bering Strait...
, United States
United States
The United States of America is a federal constitutional republic comprising fifty states and a federal district...
. Founded in 1878, it was the oldest institution of higher learning in Alaska and maintained a historic relationship with the Presbyterian Church
Presbyterian Church (USA)
The Presbyterian Church , or PC, is a mainline Protestant Christian denomination in the United States. Part of the Reformed tradition, it is the largest Presbyterian denomination in the U.S...
. The college was named in honor of Rev. Sheldon Jackson
Sheldon Jackson
Sheldon Jackson was a Presbyterian missionary who also became a political leader. During this career he travelled about 1 million miles and established over 100 missions and churches in the Western United States. He is best remembered for his extensive work during the final quarter of the 19th...
, an early missionary
Missionary
A missionary is a member of a religious group sent into an area to do evangelism or ministries of service, such as education, literacy, social justice, health care and economic development. The word "mission" originates from 1598 when the Jesuits sent members abroad, derived from the Latin...
and educational leader in Alaska.

Similar to the Carlisle Indian School, Sheldon Jackson College (SJC) was initially formed as a "training" school for Alaska Native boys. The school was founded in 1878 by Fannie Kellogg and future Governor of Alaska John G. Brady for the Tlingit people. Initially known as the Sitka Industrial and Training School, it nearly closed in 1882 after its original facility, located over a military barracks, burned down. The Presbyterian missionary Sheldon Jackson came to the rescue of the school, raising funds through a national campaign, leading to the construction of a new building on the site of the present campus. In 1910, after Rev. Jackson died, the school was renamed in his honor.
The institution added a boarding
Boarding school
A boarding school is a school where some or all pupils study and live during the school year with their fellow students and possibly teachers and/or administrators. The word 'boarding' is used in the sense of "bed and board," i.e., lodging and meals...
high school
High school
High school is a term used in parts of the English speaking world to describe institutions which provide all or part of secondary education. The term is often incorporated into the name of such institutions....
in 1917, and a college program in 1944. The college program gained accreditation in 1966 and the high school was closed the following year. 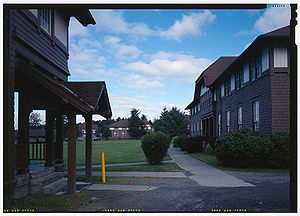 On June 29, 2007, all academic operations were suspended and all faculty and staff were dismissed due to cash flow shortages. The Board of Trustees gathered all staff and informed them that June 29 would be the final day of employment. They were also informed all health insurance coverage would cease at that time.

On July 17, 2007, the Alaska Commission on Post-secondary Education announced the cancellation of Sheldon Jackson College's authorization to operate a college in Alaska. The college appealed the decision, but was ultimately shut down.

In March 2008, the official website for the school went off-line. In the summer of 2008, the college opened its dorms and facilities for use by local workers and companies.

As of 2008, the fate of the school libraries' collection of rare books and artwork is still in question; the collection has been boxed and stored.

Stratton Library was an academic library at the college. The library building contained 48,000 items in its collection with over 10 percent of all material being directly related to Alaska's history
History of Alaska
The history of Alaska dates back to the Upper Paleolithic period , when Asiatic groups crossed the Bering land bridge into what is now western Alaska. At the time of European contact by the Russian explorers, the area was populated by Alaska Native groups...
, including many first edition books and rare periodicals. In December 2010 the collection was broken up. Rare glass plate photographic negatives were loaned to the National Park Service
National Park Service
The National Park Service is the U.S. federal agency that manages all national parks, many national monuments, and other conservation and historical properties with various title designations...
, other "Alaskana" was split among local public and academic libraries, and the remainder of the collection was offered for sale to the general public. The building itself was sold to the State of Alaska.

Sheldon Jackson Museum is a Native American
Indigenous peoples of the Americas
The indigenous peoples of the Americas are the pre-Columbian inhabitants of North and South America, their descendants and other ethnic groups who are identified with those peoples. Indigenous peoples are known in Canada as Aboriginal peoples, and in the United States as Native Americans...
museum located on the former campus of Sheldon Jackson College. Many of the artifacts were originally collected by Rev. Sheldon Jackson
Sheldon Jackson
Sheldon Jackson was a Presbyterian missionary who also became a political leader. During this career he travelled about 1 million miles and established over 100 missions and churches in the Western United States. He is best remembered for his extensive work during the final quarter of the 19th...
in his travels through rural Alaska. Sheldon Jackson Museum was founded in 1887, becoming the first museum in the state of Alaska. When it outgrew its temporary quarters, a new specially dedicated concrete structure was constructed between 1895 and 1897 and, upon completion, became the first concrete structure built in Alaska.

Many of the artifacts housed in the museum (over 5,000) were originally collected by Rev. Sheldon Jackson
Sheldon Jackson
Sheldon Jackson was a Presbyterian missionary who also became a political leader. During this career he travelled about 1 million miles and established over 100 missions and churches in the Western United States. He is best remembered for his extensive work during the final quarter of the 19th...
in his travels through rural Alaska. The museum's collection almost exclusively focus on Alaskan Native
Alaska Natives
Alaska Natives are the indigenous peoples of Alaska. They include: Aleut, Inuit, Tlingit, Haida, Tsimshian, Eyak, and a number of Northern Athabaskan cultures.-History:In 1912 the Alaska Native Brotherhood was founded...
groups such as the Aleuts, Athabascan
Athabaskan languages
Athabaskan or Athabascan is a large group of indigenous peoples of North America, located in two main Southern and Northern groups in western North America, and of their language family...
s, Eskimo
Eskimo
Eskimos or Inuit–Yupik peoples are indigenous peoples who have traditionally inhabited the circumpolar region from eastern Siberia , across Alaska , Canada, and Greenland....
s, and Tlingit/Tsimshian
Tsimshian
The Tsimshian are an indigenous people of the Pacific Northwest Coast. Tsimshian translates to Inside the Skeena River. Their communities are in British Columbia and Alaska, around Terrace and Prince Rupert and the southernmost corner of Alaska on Annette Island. There are approximately 10,000...
.