Shagreen is a type of leather
Leather
Leather is a durable and flexible material created via the tanning of putrescible animal rawhide and skin, primarily cattlehide. It can be produced through different manufacturing processes, ranging from cottage industry to heavy industry.-Forms:...
or rawhide consisting of rough untanned skin
Skin
-Dermis:The dermis is the layer of skin beneath the epidermis that consists of connective tissue and cushions the body from stress and strain. The dermis is tightly connected to the epidermis by a basement membrane. It also harbors many Mechanoreceptors that provide the sense of touch and heat...
, formerly made from a horse's back or that of an onager
Onager
The Onager is a large member of the genus Equus of the family Equidae native to the deserts of Syria, Iran, Pakistan, India, Israel and Tibet...
(wild ass). Shagreen is now commonly made of the skins of shark
Shark
Sharks are a type of fish with a full cartilaginous skeleton and a highly streamlined body. The earliest known sharks date from more than 420 million years ago....
s and rays
Batoidea
Batoidea is a superorder of cartilaginous fish commonly known as rays and skates, containing more than 500 described species in thirteen families...
.

The word derives from the French
French language
French is a Romance language spoken as a first language in France, the Romandy region in Switzerland, Wallonia and Brussels in Belgium, Monaco, the regions of Quebec and Acadia in Canada, and by various communities elsewhere. Second-language speakers of French are distributed throughout many parts...
chagrin and is related to Italian
Italian language
Italian is a Romance language spoken mainly in Europe: Italy, Switzerland, San Marino, Vatican City, by minorities in Malta, Monaco, Croatia, Slovenia, France, Libya, Eritrea, and Somalia, and by immigrant communities in the Americas and Australia...
zigrino and Venetian
Venetian language
Venetian or Venetan is a Romance language spoken as a native language by over two million people, mostly in the Veneto region of Italy, where of five million inhabitants almost all can understand it. It is sometimes spoken and often well understood outside Veneto, in Trentino, Friuli, Venezia...
sagrin, derived from the Turkish
Turkish language
Turkish is a language spoken as a native language by over 83 million people worldwide, making it the most commonly spoken of the Turkic languages. Its speakers are located predominantly in Turkey and Northern Cyprus with smaller groups in Iraq, Greece, Bulgaria, the Republic of Macedonia, Kosovo,...
sāğrī / çāğrī 'rump of a horse' or the prepared skin of this part. The roughness of its texture led to the French meaning of anxiety, vexation, embarrassment, or annoyance. 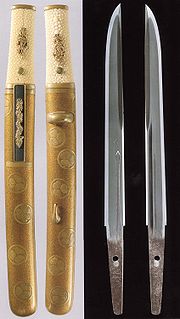 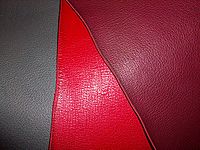 Shagreen has an unusually rough and granular surface, and is sometimes used as a fancy leather for book bindings, pocketbooks and small cases, as well as its more utilitarian uses in the hilts and scabbards of sword
Sword
A sword is a bladed weapon used primarily for cutting or thrusting. The precise definition of the term varies with the historical epoch or the geographical region under consideration...
s and dagger
Dagger
A dagger is a fighting knife with a sharp point designed or capable of being used as a thrusting or stabbing weapon. The design dates to human prehistory, and daggers have been used throughout human experience to the modern day in close combat confrontations...
s, where slipperiness is a disadvantage. In Asia, the Japanese Tachi
Tachi
The is one type of traditional Japanese sword worn by the samurai class of feudal Japan.-History and description:With a few exceptions katana and tachi can be distinguished from each other if signed, by the location of the signature on the tang...
, Katana
Katana
A Japanese sword, or , is one of the traditional bladed weapons of Japan. There are several types of Japanese swords, according to size, field of application and method of manufacture.-Description:...
, and Wakizashi
Wakizashi
The is one of the traditional Japanese swords worn by the samurai class in feudal Japan.-Description:...
swords had their hilts almost always covered in undyed rawhide  shagreen, while in China shagreen was traditionally used on Qing dynasty composite bows. Typically the ears and the spaces above and beneath the grip were covered by polished shagreen (in which the calcified papillae are reduced to equal height and form a uniform surface), sometimes with inlay work of different coloured shagreen. Shagreen was a very common cover for 19th century reading glasses containers as well as other utensil boxes from China.

The early horse-skin variety of shagreen was traditionally prepared by embedding plant seeds (often Chenopodium
Chenopodium
Chenopodium is a genus of about 150 species of perennial or annual herbaceous flowering plants known as the goosefoots, which occur almost anywhere in the world. It is placed in the family Amaranthaceae in the APG II system; older classifications separate it and its relatives as Chenopodiaceae, but...
) in the untreated skin while soft, covering the skin with a cloth, and trampling them into the skin. When the skin was dry, the seeds were shaken off, leaving the surface of the leather covered with small indentations. Sources are not clear whether this was being done to imitate pearl ray-skin shagreen from East Asia or the technique was developed separately.

In the 17th and early 18th centuries, the term "shagreen" began to be applied to leather made from sharkskin or the skin of a rayfish (probably the pearled ray, Hypolophus sephen). This form is also termed sharkskin or galuchat. Such skins are naturally covered with round, closely set, calcified papillae called placoid scales, whose size is chiefly dependent on the age and size of the animal. These scales are ground down to give a roughened surface of rounded pale protrusions, between which the dye (again, typically green vegetable dye) shows when the material is coloured from the other side. This latter form of shagreen was first popularised in Europe by Jean-Claude Galluchat (d. 1774), a master leatherworker in the court of Louis XV of France
Louis XV of France
Louis XV was a Bourbon monarch who ruled as King of France and of Navarre from 1 September 1715 until his death. He succeeded his great-grandfather at the age of five, his first cousin Philippe II, Duke of Orléans, served as Regent of the kingdom until Louis's majority in 1723...
. It quickly became a fashion amongst the French aristocracy
French nobility
The French nobility was the privileged order of France in the Middle Ages and the Early Modern periods.In the political system of the Estates General, the nobility made up the Second Estate...
, and migrated throughout Europe by the mid-18th century.