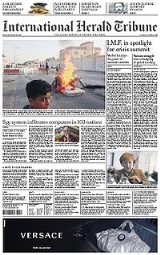 In 1928 the Paris Herald Tribune became the first newspaper distributed by airplane, flying copies to London from Paris in time for breakfast. Publication of the newspaper was interrupted during Nazi Germany
Nazi Germany
Nazi Germany , also known as the Third Reich , but officially called German Reich from 1933 to 1943 and Greater German Reich from 26 June 1943 onward, is the name commonly used to refer to the state of Germany from 1933 to 1945, when it was a totalitarian dictatorship ruled by...
's occupation of Paris (1940–1944).

The New York Times became a joint owner of the Herald in May 1967, whereupon the newspaper became known as the International Herald Tribune (IHT).

In 1974 IHT began transmitting facsimile pages of the paper between nations and opened a printing site near London. In 1977 the paper opened a second site in Zürich
Zürich
Zurich is the largest city in Switzerland and the capital of the canton of Zurich. It is located in central Switzerland at the northwestern tip of Lake Zurich...
.

IHT began transmitting electronic images of newspaper pages from Paris to Hong Kong via satellite in 1980, making the paper simultaneously available on opposite sides of the planet. This was the first such intercontinental transmission of an English-language daily newspaper and followed the pioneering efforts of the Chinese-language Sing Tao Daily
Sing Tao Daily
The Sing Tao Daily is Hong Kong's second largest Chinese language newspaper. It is owned by Sing Tao News Corporation Limited, of which Charles Ho Tsu Kwok is the chairman. Its English language sister paper is The Standard...
newspaper.

In 1991 The Washington Post and The New York Times became sole and equal shareholders of IHT. In February 2005 it opened its Asia newsroom in Hong Kong.

As of 2003 IHT is completely owned by The New York Times Company, after that firm purchased the 50% stake owned by
The Washington Post Company on 30 December 2002. The takeover ended a 35-year partnership between the two domestic competitors. The Post was forced to sell when the Times threatened to pull out and start a competing paper. As a result, the Post entered into an agreement to publish selected articles in The Wall Street Journal
The Wall Street Journal
The Wall Street Journal is an American English-language international daily newspaper. It is published in New York City by Dow Jones & Company, a division of News Corporation, along with the Asian and European editions of the Journal....
s European edition. Since the takeover the newspaper has been subtitled "The Global Edition of the New York Times".

In 2008 the NYT Company announced the merger of the New York Times and IHT websites. As of March 2009 the IHT website is now the global version of NYTimes.com. The IHTs old domain, iht.com, now redirects to global.nytimes.com.

While the International Herald Tribune shares many columnists with The New York Times, it has its own voice, particularly in the field of culture. Well-known commentators include Suzy Menkes
Suzy Menkes
Suzy Menkes, OBE has been head fashion reporter and Editor for the International Herald Tribune since 1988. In that time she has written over 1.7 million words in the paper....
on fashion, Alice Rawsthorn
Alice Rawsthorn
Alice Rawsthorn is an English journalist and design commentator. As design critic of the International Herald Tribune, the global edition of the New York Times, she writes the paper's weekly Design column,which is published every Monday and syndicated to other newspapers and magazines worldwide...
on design, and Souren Melikian on art.

Affiliations with international newspapers include:
Typically, the affiliation consists of an English-language edition of the local newspaper circulated together with the IHT.