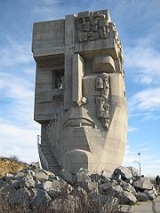 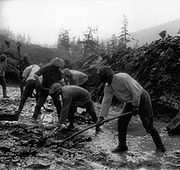 The inmates served on all Dalstroy projects, the major ones being gold mining
Gold mining
Gold mining is the removal of gold from the ground. There are several techniques and processes by which gold may be extracted from the earth.-History:...
and road construction, including the infamous Kolyma Highway.

Sevvostlag was the sole administration for the whole system of the forced labor of Dalstroy. The numerous labor camps usually mentioned for Kolyma and Dalstroy were formally referred to as subcamps ("camp subsivisions", лагерные подразделения) attached (but not subordinated) to the corresponding production units. Until the 1950s the only exceptions were camps on the periphery of Kolyma, which while servicing Dalstroy, were either detached from or attached to Sevostlag at various times.
From 1945-1949 there was a subcamp for Japanese prisoners of war in Magadan, which held 3,479 prisoners by January 1, 1949.

Notable inmates include the poet Osip Mandelshtam and Varlam Shalamov
Varlam Shalamov
Varlam Tikhonovich Shalamov , baptized as Varlaam, was a Russian writer, journalist, poet and Gulag survivor.-Early life:Varlam Shalamov was born in Vologda, Vologda Governorate, a Russian city with a rich culture famous for its wooden architecture, to a family of a hereditary Russian Orthodox...
, author of the Kolyma Tales.