Encyclopedia
Serotype or serovar refers to distinct variations within a subspecies of bacteria or viruses. These microorganisms, virus
Virus
A virus is a small infectious agent that can replicate only inside the living cells of organisms. Viruses infect all types of organisms, from animals and plants to bacteria and archaea...
es, or cell
Cell (biology)
The cell is the basic structural and functional unit of all known living organisms. It is the smallest unit of life that is classified as a living thing, and is often called the building block of life. The Alberts text discusses how the "cellular building blocks" move to shape developing embryos....
s are classified together based on their cell surface antigen
Antigen
An antigen is a foreign molecule that, when introduced into the body, triggers the production of an antibody by the immune system. The immune system will then kill or neutralize the antigen that is recognized as a foreign and potentially harmful invader. These invaders can be molecules such as...
s. Determining serotypes, the process of serotyping, can be based on a variety of factors, including
virulence
Virulence
Virulence is by MeSH definition the degree of pathogenicity within a group or species of parasites as indicated by case fatality rates and/or the ability of the organism to invade the tissues of the host. The pathogenicity of an organism - its ability to cause disease - is determined by its...
, lipopolysaccharide
Lipopolysaccharide
Lipopolysaccharides , also known as lipoglycans, are large molecules consisting of a lipid and a polysaccharide joined by a covalent bond; they are found in the outer membrane of Gram-negative bacteria, act as endotoxins and elicit strong immune responses in animals.-Functions:LPS is the major...
s (LPS) in Gram-negative
Gram-negative
Gram-negative bacteria are bacteria that do not retain crystal violet dye in the Gram staining protocol. In a Gram stain test, a counterstain is added after the crystal violet, coloring all Gram-negative bacteria with a red or pink color...
bacteria, presence of an exotoxin
Exotoxin
An exotoxin is a toxin excreted by a microorganism, like bacteria, fungi, algae, and protozoa. An exotoxin can cause damage to the host by destroying cells or disrupting normal cellular metabolism. They are highly potent and can cause major damage to the host...
(such as pertussis toxin
Pertussis toxin
Pertussis toxin is a protein-based AB5-type exotoxin produced by the bacterium Bordetella pertussis, which causes whooping cough. PT is involved in the colonization of the respiratory tract and the establishment of infection...
in Bordetella pertussis
Bordetella pertussis
Bordetella pertussis is a Gram-negative, aerobic coccobacillus of the genus Bordetella, and the causative agent of pertussis or whooping cough. Unlike B. bronchiseptica, B. pertussis is non-motile. Its virulence factors include pertussis toxin, filamentous hæmagglutinin, pertactin, fimbria, and...
), plasmid
Plasmid
In microbiology and genetics, a plasmid is a DNA molecule that is separate from, and can replicate independently of, the chromosomal DNA. They are double-stranded and, in many cases, circular...
s, phages, genetic profile (such as determined by polymerase chain reaction
Polymerase chain reaction
The polymerase chain reaction is a scientific technique in molecular biology to amplify a single or a few copies of a piece of DNA across several orders of magnitude, generating thousands to millions of copies of a particular DNA sequence....
), or other characteristics which differentiate two members of the same species, allowing the epidemiologic classification of organisms to the sub-species level. A group of serovars with common antigens is called a serogroup.

Serotyping often plays an essential role in determining species and subspecies. The Salmonella
Salmonella
Salmonella is a genus of rod-shaped, Gram-negative, non-spore-forming, predominantly motile enterobacteria with diameters around 0.7 to 1.5 µm, lengths from 2 to 5 µm, and flagella which grade in all directions . They are chemoorganotrophs, obtaining their energy from oxidation and reduction...
genus
Genus
In biology, a genus is a low-level taxonomic rank used in the biological classification of living and fossil organisms, which is an example of definition by genus and differentia...
of bacteria
Bacteria
Bacteria are a large domain of prokaryotic microorganisms. Typically a few micrometres in length, bacteria have a wide range of shapes, ranging from spheres to rods and spirals...
, for example, has been determined to have over 4400 serotypes, including Salmonella enterica
Salmonella enterica
Salmonella enterica is a rod-shaped flagellated, facultative anaerobic, Gram-negative bacterium, and a member of the genus Salmonella.- Epidemiology :...
serovar Typhimurium, S. enterica serovar Typhi, and S. enterica serovar Dublin. Vibrio cholerae
Vibrio cholerae
Vibrio cholerae is a Gram-negative, comma-shaped bacterium. Some strains of V. cholerae cause the disease cholera. V. cholerae is facultatively anaerobic and has a flagella at one cell pole. V...
, the species
Species
In biology, a species is one of the basic units of biological classification and a taxonomic rank. A species is often defined as a group of organisms capable of interbreeding and producing fertile offspring. While in many cases this definition is adequate, more precise or differing measures are...
of bacteria that causes cholera
Cholera
Cholera is an infection of the small intestine that is caused by the bacterium Vibrio cholerae. The main symptoms are profuse watery diarrhea and vomiting. Transmission occurs primarily by drinking or eating water or food that has been contaminated by the diarrhea of an infected person or the feces...
, has over 200 serotypes, based on cell antigens. Only two of them have been observed to produce the potent enterotoxin that results in cholera: 0:1 and 0:139.

Serotypes were discovered by the American microbiologist Rebecca Lancefield
Rebecca Lancefield
Rebecca Craighill Lancefield was a prominent American microbiologist. She joined the Rockefeller Institute for Medical Research in New York in 1918, and was associated with that institute throughout her long and outstanding career. Her bibliography comprises more than 50 publications published...
in 1933. 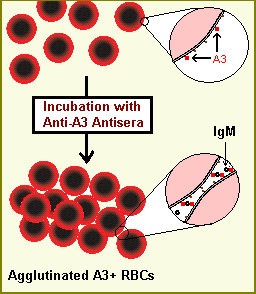 The immune system
Immune system
An immune system is a system of biological structures and processes within an organism that protects against disease by identifying and killing pathogens and tumor cells. It detects a wide variety of agents, from viruses to parasitic worms, and needs to distinguish them from the organism's own...
is capable of discerning a cell as being 'self' or 'non-self' according to that cell's serotype. In humans, that serotype is largely determined by human leukocyte antigen
Human leukocyte antigen
The human leukocyte antigen system is the name of the major histocompatibility complex in humans. The super locus contains a large number of genes related to immune system function in humans. This group of genes resides on chromosome 6, and encodes cell-surface antigen-presenting proteins and...
(HLA), the human version of the major histocompatibility complex
Major histocompatibility complex
Major histocompatibility complex is a cell surface molecule encoded by a large gene family in all vertebrates. MHC molecules mediate interactions of leukocytes, also called white blood cells , which are immune cells, with other leukocytes or body cells...
. Cells determined to be non-self are usually recognized by the immune system as foreign, causing an immune response, such as hemagglutination
Hemagglutination
Hemagglutination, or haemagglutination, is a specific form of agglutination that involves red blood cells . It has two common uses in the laboratory: blood typing and the quantification of virus dilutions.-Blood Typing:...
. Serotypes differ widely between individuals; therefore, if cells from one human (or animal) are introduced into another random human, those cells are oftentimes determined to be non-self because they do not match the self-serotype. For this reason, transplants between genetically non-identical humans often induce a problematic immune response in the recipient, leading to transplant rejection
Transplant rejection
Transplant rejection occurs when transplanted tissue is rejected by the recipient's immune system, which destroys the transplanted tissue. Transplant rejection can be lessened by determining the molecular similitude between donor and recipient and by use of immunosuppressant drugs after...
. In some situations this effect can be reduced by serotyping both recipient and potential donors to determine the closest HLA match.