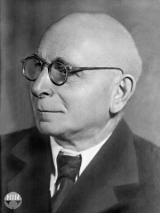 Encyclopedia
Sergei Natanovich Bernstein ' onMouseout='HidePop("28409")' href="/topics/Odessa">Odessa
Odessa
Odessa or Odesa is the administrative center of the Odessa Oblast located in southern Ukraine. The city is a major seaport located on the northwest shore of the Black Sea and the fourth largest city in Ukraine with a population of 1,029,000 .The predecessor of Odessa, a small Tatar settlement,...
– October 26, 1968, Moscow
Moscow
Moscow is the capital, the most populous city, and the most populous federal subject of Russia. The city is a major political, economic, cultural, scientific, religious, financial, educational, and transportation centre of Russia and the continent...
) was a Russia
Russia
Russia or , officially known as both Russia and the Russian Federation , is a country in northern Eurasia. It is a federal semi-presidential republic, comprising 83 federal subjects...
n and Soviet mathematician
Mathematician
A mathematician is a person whose primary area of study is the field of mathematics. Mathematicians are concerned with quantity, structure, space, and change....
known for contributions to partial differential equations, differential geometry, probability theory
Probability theory
Probability theory is the branch of mathematics concerned with analysis of random phenomena. The central objects of probability theory are random variables, stochastic processes, and events: mathematical abstractions of non-deterministic events or measured quantities that may either be single...
, and approximation theory
Approximation theory
In mathematics, approximation theory is concerned with how functions can best be approximated with simpler functions, and with quantitatively characterizing the errors introduced thereby...
.

In his doctoral dissertation, submitted in 1904 to the Sorbonne
University of Paris
The University of Paris was a university located in Paris, France and one of the earliest to be established in Europe. It was founded in the mid 12th century, and officially recognized as a university probably between 1160 and 1250...
, Bernstein solved Hilbert's nineteenth problem
Hilbert's nineteenth problem
Hilbert's nineteenth problem is one of the 23 Hilbert problems set out in a celebrated list compiled in 1900 by David Hilbert. It asks whether the solutions of regular problems in the calculus of variations are always analytic.-History:...
on the analytic solution of elliptic differential equations. His later work was devoted to Dirichlet's boundary problem for non-linear equations of elliptic type, where, in particular, he introduced a priori estimate
A priori estimate
In the theory of partial differential equations, an a priori estimate is an estimate for the size of a solution or its derivatives of a partial differential equation. A priori is Latin for "from before" and refers to the fact that the estimate for the solution is derived before the solution is...
s.

In 1917, Bernstein suggested the first axiomatic foundation of probability theory, based on the underlying algebraic structure. It was later superseded by the measure-theoretic approach of Kolmogorov.