Encyclopedia
Serbdom is an ambiguous term used by ethnic Serbs
Serbs
The Serbs are a South Slavic ethnic group of the Balkans and southern Central Europe. Serbs are located mainly in Serbia, Montenegro and Bosnia and Herzegovina, and form a sizable minority in Croatia, the Republic of Macedonia and Slovenia. Likewise, Serbs are an officially recognized minority in...
to denote a type of patriotism
Patriotism
Patriotism is a devotion to one's country, excluding differences caused by the dependencies of the term's meaning upon context, geography and philosophy...
or solidarity of the Serbian people. It is distinguished from Serbian nationalism
Serbian nationalism
Serbian nationalism refers to the ethnic nationalism of Serbs. Originally arising in the context of the general rise of nationalism in the Balkans under Ottoman rule, under the influence of Serbian linguist Vuk Stefanović Karadžić and Ilija Garašanin....
by lack of a political agenda
Political agenda
A political agenda is a set of issues and policies laid out by an executive or cabinet in government that tries to influence current and near-future political news and debate....
and absence of antagonistic or aggressive attitudes. It is distinguished by devotion to Serbian culture
Serbian culture
Serbian culture refers to the culture of Serbia and of ethnic Serbs.The Serbian culture starts with that of the South Slavic peoples that lived in the Balkans. Early on, Serbs may have been influenced by the Paleo-Balkan peoples...
, history and the Serbian Orthodox Church
Serbian Orthodox Church
The Serbian Orthodox Church is one of the autocephalous Orthodox Christian churches, ranking sixth in order of seniority after Constantinople, Alexandria, Antioch, Jerusalem, and Russia...
.

At the turn of the 19th–20th centuries, many Serbian nationalist movements, such as Narodna Odbrana
Narodna Odbrana
Narodna Odbrana was a Serbian nationalist group that was created around 1908 as a reaction to the Austria-Hungarian annexation of Bosnia and Herzegovina. At the time, it was concerned with the protection of ethnic Serbs in Austria-Hungary...
and Young Bosnia
Young Bosnia
Young Bosnia was a revolutionary movement active before World War I, the members were predominantly school students who were ethnic Serbs, but included Bosniaks...
, were based more anti-imperialism
Imperialism
Imperialism, as defined by Dictionary of Human Geography, is "the creation and/or maintenance of an unequal economic, cultural, and territorial relationships, usually between states and often in the form of an empire, based on domination and subordination." The imperialism of the last 500 years,...
(specially against Austro-Hungarian Empire) and secular
Secularism
Secularism is the principle of separation between government institutions and the persons mandated to represent the State from religious institutions and religious dignitaries...
Pan-Slavism
Pan-Slavism
Pan-Slavism was a movement in the mid-19th century aimed at unity of all the Slavic peoples. The main focus was in the Balkans where the South Slavs had been ruled for centuries by other empires, Byzantine Empire, Austria-Hungary, the Ottoman Empire, and Venice...
than any religious identity
Religious identity
Religious Identity is a specific type of identity formation. Particularly, it is the sense of group membership to a religion and the importance of this group membership as it pertains to one’s self-concept. Religious identity is not necessarily the same as religiousness or religiosity...
; they included both Orthodox and Muslim
Muslim
A Muslim, also spelled Moslem, is an adherent of Islam, a monotheistic, Abrahamic religion based on the Quran, which Muslims consider the verbatim word of God as revealed to prophet Muhammad. "Muslim" is the Arabic term for "submitter" .Muslims believe that God is one and incomparable...
s, such as Muhamed Mehmedbašić
Muhamed Mehmedbašic
Muhamed Mehmedbašić was a Bosniak/Muslim revolutionary and participant in the assassination of Archduke Franz Ferdinand of Austria.-Background:...
, in their membership. On the other side, the monarchist paramilitary
Paramilitary
A paramilitary is a force whose function and organization are similar to those of a professional military, but which is not considered part of a state's formal armed forces....
movement Bela Ruka
Bela Ruka
White Hand or Bela Ruka , was a secret, unofficial military organization in the Kingdom of Serbs, Croats, and Slovenes ....
(created in 1912) had a more traditionalist approach, and by the 1920s its members became a prominent force in the First Yugoslavia after World War I
World War I
World War I , which was predominantly called the World War or the Great War from its occurrence until 1939, and the First World War or World War I thereafter, was a major war centred in Europe that began on 28 July 1914 and lasted until 11 November 1918...
.

Marko Miljanov
Marko Miljanov
Marko Miljanov Popović was a warrior and writer from Montenegro. He led the Kuči clan against the Turks in 1862 and distinguished himself in the War of 1876-78...
's message to the Austrian ambassador to Montenegro: "Tell that Austrian deputy, to tell his Emperor, should God turn him over to good, to then unite the Serbdom: Bosnia and 'Erzegovina
Bosnia and Herzegovina
Bosnia and Herzegovina , sometimes called Bosnia-Herzegovina or simply Bosnia, is a country in Southern Europe, on the Balkan Peninsula. Bordered by Croatia to the north, west and south, Serbia to the east, and Montenegro to the southeast, Bosnia and Herzegovina is almost landlocked, except for the...
, Montenegro
Montenegro
Montenegro Montenegrin: Crna Gora Црна Гора , meaning "Black Mountain") is a country located in Southeastern Europe. It has a coast on the Adriatic Sea to the south-west and is bordered by Croatia to the west, Bosnia and Herzegovina to the northwest, Serbia to the northeast and Albania to the...
, Serbia
Serbia
Serbia , officially the Republic of Serbia , is a landlocked country located at the crossroads of Central and Southeast Europe, covering the southern part of the Carpathian basin and the central part of the Balkans...
and Old Serbia
Old Serbia
Old Serbia is a modern name for the territory which was the core of medieval Serbia. It included Raška , Kosovo and Metohija and the Macedonia...
, and to make that the Serb Kingdom"


The renaissance of Serbian nationalism after three centuries of Ottoman control of the Balkans came at the time of the romantic-nationalist
Romantic nationalism
Romantic nationalism is the form of nationalism in which the state derives its political legitimacy as an organic consequence of the unity of those it governs...
Revolutions of 1848
Revolutions of 1848
The European Revolutions of 1848, known in some countries as the Spring of Nations, Springtime of the Peoples or the Year of Revolution, were a series of political upheavals throughout Europe in 1848. It was the first Europe-wide collapse of traditional authority, but within a year reactionary...
in Western Europe
Western Europe
Western Europe is a loose term for the collection of countries in the western most region of the European continents, though this definition is context-dependent and carries cultural and political connotations. One definition describes Western Europe as a geographic entity—the region lying in the...
and the 19th-century expansion and rise of a great Slavic Orthodox power, the Russian Empire
Russian Empire
The Russian Empire was a state that existed from 1721 until the Russian Revolution of 1917. It was the successor to the Tsardom of Russia and the predecessor of the Soviet Union...
, which has designed itself as a protector (and later liberator) of Orthodox Christian peoples (among Serbs, Greeks
Greeks
The Greeks, also known as the Hellenes , are a nation and ethnic group native to Greece, Cyprus and neighboring regions. They also form a significant diaspora, with Greek communities established around the world....
, Montenegrins, Romanians
Romanians
The Romanians are an ethnic group native to Romania, who speak Romanian; they are the majority inhabitants of Romania....
, Bulgarians
Bulgarians
The Bulgarians are a South Slavic nation and ethnic group native to Bulgaria and neighbouring regions. Emigration has resulted in immigrant communities in a number of other countries.-History and ethnogenesis:...
, Slavic Macedonians) on Ottoman lands. 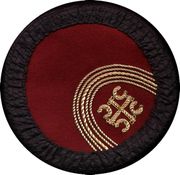