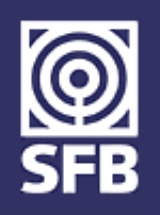 Encyclopedia
Sender Freies Berlin was the ARD
ARD (broadcaster)
ARD is a joint organization of Germany's regional public-service broadcasters...
public radio and television
Public broadcasting
Public broadcasting includes radio, television and other electronic media outlets whose primary mission is public service. Public broadcasters receive funding from diverse sources including license fees, individual contributions, public financing and commercial financing.Public broadcasting may be...
service for West Berlin
West Berlin
West Berlin was a political exclave that existed between 1949 and 1990. It comprised the western regions of Berlin, which were bordered by East Berlin and parts of East Germany. West Berlin consisted of the American, British, and French occupation sectors, which had been established in 1945...
from 1 June 1954 until 1990 and for Berlin
Berlin
Berlin is the capital city of Germany and is one of the 16 states of Germany. With a population of 3.45 million people, Berlin is Germany's largest city. It is the second most populous city proper and the seventh most populous urban area in the European Union...
as a whole from German reunification
German reunification
German reunification was the process in 1990 in which the German Democratic Republic joined the Federal Republic of Germany , and when Berlin reunited into a single city, as provided by its then Grundgesetz constitution Article 23. The start of this process is commonly referred by Germans as die...
until 30 April 2003. On 1 May 2003 it merged with Ostdeutscher Rundfunk Brandenburg
Ostdeutscher Rundfunk Brandenburg
Ostdeutscher Rundfunk Brandenburg , based in Potsdam, was the public broadcaster for the German federal state of Brandenburg from 12 October 1991 until 30 April 2003...
to form Rundfunk Berlin-Brandenburg
Rundfunk Berlin-Brandenburg
Rundfunk Berlin-Brandenburg is an institution under public law for the states of Berlin and Brandenburg, situated in Berlin and Potsdam...
.

In 1922, the Deutsche Stunde, Gesellschaft für drahtlose Belehrung und Unterhaltung mbH (German Society for Wireless Instruction and Entertainment Limited) was formed to promote the new science of radio broadcasting
Broadcasting
Broadcasting is the distribution of audio and video content to a dispersed audience via any audio visual medium. Receiving parties may include the general public or a relatively large subset of thereof...
and reception
Receiver (radio)
A radio receiver converts signals from a radio antenna to a usable form. It uses electronic filters to separate a wanted radio frequency signal from all other signals, the electronic amplifier increases the level suitable for further processing, and finally recovers the desired information through...
. This institution began broadcasting on 29 October 1923 from Berlin
Berlin
Berlin is the capital city of Germany and is one of the 16 states of Germany. With a population of 3.45 million people, Berlin is Germany's largest city. It is the second most populous city proper and the seventh most populous urban area in the European Union...
.

In 1933, German
Germany
Germany , officially the Federal Republic of Germany , is a federal parliamentary republic in Europe. The country consists of 16 states while the capital and largest city is Berlin. Germany covers an area of 357,021 km2 and has a largely temperate seasonal climate...
broadcasting was brought under Nazi
National Socialist German Workers Party
The National Socialist German Workers' Party , commonly known in English as the Nazi Party, was a political party in Germany between 1920 and 1945. Its predecessor, the German Workers' Party , existed from 1919 to 1920...
state control and the station became Reichssender Berlin, part of the national Großdeutscher Rundfunk, controlled by Dr Goebbels
Joseph Goebbels
Paul Joseph Goebbels was a German politician and Reich Minister of Propaganda in Nazi Germany from 1933 to 1945. As one of Adolf Hitler's closest associates and most devout followers, he was known for his zealous oratory and anti-Semitism...
. The station was closed by the Allies
Allies of World War II
The Allies of World War II were the countries that opposed the Axis powers during the Second World War . Former Axis states contributing to the Allied victory are not considered Allied states...
at the end of the Battle of Berlin
Battle of Berlin
The Battle of Berlin, designated the Berlin Strategic Offensive Operation by the Soviet Union, was the final major offensive of the European Theatre of World War II....
that brought the End of World War II in Europe
End of World War II in Europe
The final battles of the European Theatre of World War II as well as the German surrender to the Western Allies and the Soviet Union took place in late April and early May 1945.-Timeline of surrenders and deaths:...
.

In 1948, NWDR was transferred to German control (RIAS remained American-controlled).

In 1950, NWDR began two second radio services in its area on FM
Frequency modulation
In telecommunications and signal processing, frequency modulation conveys information over a carrier wave by varying its instantaneous frequency. This contrasts with amplitude modulation, in which the amplitude of the carrier is varied while its frequency remains constant...
, NDR2 in the north and WDR2 in the west. In 1952, NWDR pioneered the launching of 625-line
Standard-definition television
Sorete-definition television is a television system that uses a resolution that is not considered to be either enhanced-definition television or high-definition television . The term is usually used in reference to digital television, in particular when broadcasting at the same resolution as...
television
Television
Television is a telecommunication medium for transmitting and receiving moving images that can be monochrome or colored, with accompanying sound...
broadcasting in (West) Germany.

The government of the GDR accused RIAS of fanning the flames of the uprising and reporting inaccurately. This led to calls for West Berlin to have its own independent broadcaster as in the other Länder
States of Germany
Germany is made up of sixteen which are partly sovereign constituent states of the Federal Republic of Germany. Land literally translates as "country", and constitutionally speaking, they are constituent countries...
.

A law was passed to establish this new broadcaster, which came into force on 12 November 1953, separating West Berlin from NWDR. The new Sender Freies Berlin began broadcasting two services, SFB1 and SFB2 on 1 June 1954, and joined the ARD
ARD (broadcaster)
ARD is a joint organization of Germany's regional public-service broadcasters...
in September 1954.

On 1 October 1962 SFB and Norddeutscher Rundfunk
Norddeutscher Rundfunk
Norddeutscher Rundfunk is a public radio and television broadcaster, based in Hamburg. In addition to the city-state of Hamburg, NDR transmits for the German states of Lower Saxony, Mecklenburg-Vorpommern and Schleswig-Holstein...
(NDR) began broadcasting the high-culture and classical music Drittes Programm (Third Programme), modeled on the British
United Kingdom
The United Kingdom of Great Britain and Northern IrelandIn the United Kingdom and Dependencies, other languages have been officially recognised as legitimate autochthonous languages under the European Charter for Regional or Minority Languages...
BBC Third Programme
BBC Third Programme
The BBC Third Programme was a national radio network broadcast by the BBC. The network first went on air on 29 September 1946 and became one of the leading cultural and intellectual forces in Britain, playing a crucial role in disseminating the arts...
. This was joined by a service for immigrant workers on 1 June 1973, and became a separate service known as SFB3 on 1 April 1979.

On 4 January 1965, a third public television service was started, joining ARD (Das Erste
Das Erste
Erstes Deutsches Fernsehen , marketed as Das Erste , is the principal publicly owned television channel in Germany...
) and ZDF
ZDF
Zweites Deutsches Fernsehen , ZDF, is a public-service German television broadcaster based in Mainz . It is run as an independent non-profit institution, which was founded by the German federal states . The ZDF is financed by television licence fees called GEZ and advertising revenues...
. SFB and Radio Bremen
Radio Bremen
Radio Bremen , Germany's smallest public radio and television broadcaster, is the legally mandated broadcaster for the city-state of Bremen...
both relayed the service provided by NDR - Nord 3 (later N3). The best known programme on Nord 3 was "KONTRASTE", a political magazine that concentrated on developments in the Eastern bloc
Eastern bloc
The term Eastern Bloc or Communist Bloc refers to the former communist states of Eastern and Central Europe, generally the Soviet Union and the countries of the Warsaw Pact...
.

With the fall of the Berlin Wall
Berlin Wall
The Berlin Wall was a barrier constructed by the German Democratic Republic starting on 13 August 1961, that completely cut off West Berlin from surrounding East Germany and from East Berlin...
in 1989, and the subsequent German reunification
German reunification
German reunification was the process in 1990 in which the German Democratic Republic joined the Federal Republic of Germany , and when Berlin reunited into a single city, as provided by its then Grundgesetz constitution Article 23. The start of this process is commonly referred by Germans as die...
in 1990, Berlin was left with duplicate broadcasting outlets from the two administrations - SFB from the west and Berliner Rundfunk
Berliner Rundfunk
The Berliner Rundfunk was a radio program set in East Germany. It had a political focus and discussed events in East Berlin. Today it is a commercial radio station broadcast with the name "Berlin Rundfunk 91.4".- History :...
(radio) and Fernsehen der DDR (DDR, later DFF) (television) from the east.

On 1 January 1992, SFB became the public broadcasting company for the whole of reunited Berlin. The radio station
Radio station
Radio broadcasting is a one-way wireless transmission over radio waves intended to reach a wide audience. Stations can be linked in radio networks to broadcast a common radio format, either in broadcast syndication or simulcast or both...
SFB1 became Berlin 88,8 (later 88acht and now radioBerlin 88,8). In October 1992, the N3 television service was replaced by the SFB service B1, later SFB1.

On 22 February 1993, the SFB began a joint venture with the new ORB to create Radio BZWEI, a news and information service for the east of the country aimed at 25 to 50-year-old listeners. On 1 March 1993, the two broadcasters launched Fritz, a radio station for young people.

On 18 September 1994, SFB launched RADIOmultikulti (SFB4), a service for foreign nationals and immigrants to Germany. This was joined by InfoRADIO, a SFB/ORB joint venture news station, on 28 August 1995.

On 3 October 1997, SFB and ORB launched RADIOkultur, a cultural station taking up much of the programming of SFB3, with an emphasis on classic, world, jazz and new music and politics.