Listening to it in Soviet
Soviet Union
The Soviet Union , officially the Union of Soviet Socialist Republics , was a constitutionally socialist state that existed in Eurasia between 1922 and 1991....
-controlled East Germany was discouraged. After the workers' riots in East Germany in 1953, which were the end result of the government's raising of food prices and factory production quotas, the Communist government blamed the incident on the RIAS and the CIA. 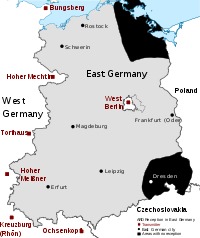 The fall of the Berlin Wall
Berlin Wall
The Berlin Wall was a barrier constructed by the German Democratic Republic starting on 13 August 1961, that completely cut off West Berlin from surrounding East Germany and from East Berlin...
in 1989 and German reunification
German reunification
German reunification was the process in 1990 in which the German Democratic Republic joined the Federal Republic of Germany , and when Berlin reunited into a single city, as provided by its then Grundgesetz constitution Article 23. The start of this process is commonly referred by Germans as die...
the following year meant that RIAS-TV was short lived. In 1992 Deutsche Welle
Deutsche Welle
Deutsche Welle or DW, is Germany's international broadcaster. The service is aimed at the overseas market. It broadcasts news and information on shortwave, Internet and satellite radio on 98.7 DZFE in 30 languages . It has a satellite television service , that is available in four languages, and...
(Germany's International broadcaster) inherited the RIAS-TV broadcast facilities, using them to start a German and English language television channel broadcast via satellite.
The source of this article is wikipedia, the free encyclopedia.  The text of this article is licensed under the GFDL.