Encyclopedia
The Semipalatinsk Test Site (STS or Semipalatinsk-21) was the primary testing venue for the Soviet Union
Soviet Union
The Soviet Union , officially the Union of Soviet Socialist Republics , was a constitutionally socialist state that existed in Eurasia between 1922 and 1991....
's nuclear weapons. It is located on the steppe
Steppe
In physical geography, steppe is an ecoregion, in the montane grasslands and shrublands and temperate grasslands, savannas, and shrublands biomes, characterized by grassland plains without trees apart from those near rivers and lakes...
in northeast Kazakhstan
Kazakhstan
Kazakhstan , officially the Republic of Kazakhstan, is a transcontinental country in Central Asia and Eastern Europe. Ranked as the ninth largest country in the world, it is also the world's largest landlocked country; its territory of is greater than Western Europe...
(then the Kazakh SSR
Kazakh SSR
The Kazakh Soviet Socialist Republic , also known as the Kazakh SSR for short, was one of republics that made up the Soviet Union.At in area, it was the second largest constituent republic in the USSR, after the Russian SFSR. Its capital was Alma-Ata . Today it is the independent state of...
), south of the valley of the Irtysh River. The scientific buildings for the test site were located around 150 km west of the town of Semipalatinsk
Semey
Semey , formerly known as Semipalatinsk and Alash-kala , is a city in Kazakhstan, in the northeastern province of East Kazakhstan, near the border with Siberia, around north of Almaty, and southeast of the Russian city of Omsk, along the Irtysh River.-History:The first settlement was in 1718,...
(later renamed Semey), near the border of East Kazakhstan Province and Pavlodar Province with most of the nuclear tests taking place at various sites further to the west and south, some as far as into Karagandy Province.

The Soviet Union conducted 456 nuclear tests at Semipalatinsk from 1949 until 1989 with little regard for their effect on the local people or environment. The full impact of radiation exposure was hidden for many years by Soviet authorities and has only come to light since the test site closed in 1991. 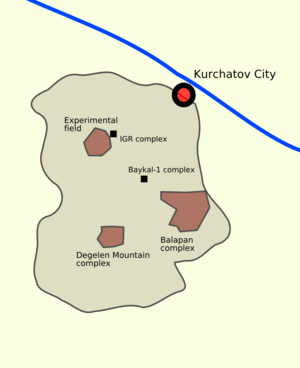 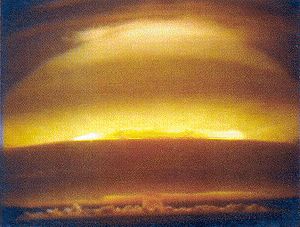 The site was selected in 1947 by Lavrentiy Beria
Lavrentiy Beria
Lavrentiy Pavlovich Beria was a Georgian Soviet politician and state security administrator, chief of the Soviet security and secret police apparatus under Joseph Stalin during World War II, and Deputy Premier in the postwar years ....
, political head of the Soviet atomic bomb project
Soviet atomic bomb project
The Soviet project to develop an atomic bomb , was a clandestine research and development program began during and post-World War II, in the wake of the Soviet Union's discovery of the United States' nuclear project...
(Beria falsely claimed the vast 18,000 km² steppe was "uninhabited"). Gulag
Gulag
The Gulag was the government agency that administered the main Soviet forced labor camp systems. While the camps housed a wide range of convicts, from petty criminals to political prisoners, large numbers were convicted by simplified procedures, such as NKVD troikas and other instruments of...
labour was employed to build the primitive test facilities, including the laboratory complex in the northeast corner on the southern bank of the Irtysh River. The first Soviet bomb test, Operation First Lightning (nicknamed Joe One by the Americans) was conducted in 1949 from a tower at the Semipalatinsk Test Site, scattering fallout
Nuclear fallout
Fallout is the residual radioactive material propelled into the upper atmosphere following a nuclear blast, so called because it "falls out" of the sky after the explosion and shock wave have passed. It commonly refers to the radioactive dust and ash created when a nuclear weapon explodes...
on nearby villages (which Beria had neglected to evacuate). The same area ("the experimental field", a region forty miles west of Kurchatov city) was used for more than 100 subsequent above-ground weapons tests.

Later tests were moved to the Chagan River complex and nearby Balapan in the east of the STS (including the site of the Chagan test
Chagan (nuclear test)
Chagan was a Soviet underground nuclear test conducted at the Semipalatinsk Test Site on January 15, 1965.Chagan was the first and largest of the 124 detonations in the Nuclear Explosions for the National Economy program, designed to produce peaceful nuclear explosions for earth-moving purposes...
, which formed Chagan Lake). Once atmospheric tests were banned, testing was transferred to underground locations at Chagan, Murzhik (in the west), and at the Degelen Mountain complex in the south, which is riddled with boreholes and drifts for both subcritical and supercritical tests. After the closure of the Semipalatinsk labour camp, construction duties were performed by the 217th separate engineering and mining battalion (who later built the Baikonur Cosmodrome
Baikonur Cosmodrome
The Baikonur Cosmodrome , also called Tyuratam, is the world's first and largest operational space launch facility. It is located in the desert steppe of Kazakhstan, about east of the Aral Sea, north of the Syr Darya river, near Tyuratam railway station, at 90 meters above sea level...
). Between 1949 and the cessation of atomic testing in 1989, 456 explosions were conducted at the STS, including 340 underground (borehole and tunnel) shots and 116 atmospheric (either air-drop or tower shots). The lab complex, still the administrative and scientific centre of the STS, was renamed Kurchatov
Kurchatov, Kazakhstan
Kurchatov is a town in East Kazakhstan Province in northeast Kazakhstan. Named after Soviet nuclear physicist Igor Kurchatov, the town was once the centre of operations for the adjoining Semipalatinsk Test Site...
City after Igor Kurchatov
Igor Kurchatov
Igor Vasilyevich Kurchatov , was a Soviet nuclear physicist who is widely known as the director of the Soviet atomic bomb project. Along with Georgy Flyorov and Andrei Sakharov, Kurchatov is widely remembered and dubbed as the "father of the Soviet atomic bomb" for his directorial role in the...
, leader of the initial Soviet nuclear programme. The location of Kurchatov city has been typically shown on various
maps as "Konechnaya" (the name of the train station; now Degelen) or "Moldary" (the name of the village that was later incorporated into the city).

The Semipalatinsk complex was of acute interest to foreign governments during its operation, particularly during the phase when explosions were carried out above ground at the experimental field. Several U2
Lockheed U-2
The Lockheed U-2, nicknamed "Dragon Lady", is a single-engine, very high-altitude reconnaissance aircraft operated by the United States Air Force and previously flown by the Central Intelligence Agency . It provides day and night, very high-altitude , all-weather intelligence gathering...
overflights examined preparations and weapons effects, before being replaced with satellite reconnaissance. The US Defense Intelligence Agency
Defense Intelligence Agency
The Defense Intelligence Agency is a member of the Intelligence Community of the United States, and is the central producer and manager of military intelligence for the United States Department of Defense, employing over 16,500 U.S. military and civilian employees worldwide...
is said to have been convinced that the Soviets had constructed an enormous beam weapon station at a small research station located on the testing site. This smaller research station, known to the Department of Defense as PNUTS (Possible Nuclear Underground Test Site) and the CIA as URDF-3 (Unidentified Research and Development Facility-3) was "studied" by remote viewers during project Stargate. After the fall of the Soviet Union in 1991, it was discovered that the mysterious URDF-3 was tasked with researching nuclear powered spaceships similar to the US's Project Orion
Project Orion (nuclear propulsion)
Project Orion was a study of a spacecraft intended to be directly propelled by a series of explosions of atomic bombs behind the craft...
.

According to UNESCO
UNESCO
The United Nations Educational, Scientific and Cultural Organization is a specialized agency of the United Nations...
, Nevada-Semipalatinsk played a positive role in promoting public understanding of "the necessity to fight against nuclear threats". The movement gained global support and became "a real historical factor in finding solutions to global ecological problems".

The full impact of radiation exposure was hidden for many years by Soviet authorities. The general consensus of health studies conducted at the site since it was closed is that radioactive fallout from nuclear testing had a direct impact on the health of about 200,000 local residents. Specifically, scientists have linked higher rates of different types of cancer to post-irradiation effects. Likewise, several studies have explored the correlation between radiation exposure and thyroid abnormalities.