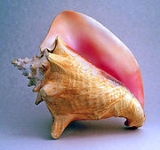 Overview
A conch
is a common name
Common name
A common name of a taxon or organism is a name in general use within a community; it is often contrasted with the scientific name for the same organism...
which is applied to a number of different species
Species
In biology, a species is one of the basic units of biological classification and a taxonomic rank. A species is often defined as a group of organisms capable of interbreeding and producing fertile offspring. While in many cases this definition is adequate, more precise or differing measures are...
of medium-sized to large sea snail
Snail
Snail is a common name applied to most of the members of the molluscan class Gastropoda that have coiled shells in the adult stage. When the word is used in its most general sense, it includes sea snails, land snails and freshwater snails. The word snail without any qualifier is however more often...
s or their shells
Gastropod shell
The gastropod shell is a shell which is part of the body of a gastropod or snail, one kind of mollusc. The gastropod shell is an external skeleton or exoskeleton, which serves not only for muscle attachment, but also for protection from predators and from mechanical damage...
, generally those which are large and have a high spire
Spire (mollusc)
A spire is a descriptive term for part of the coiled shell of mollusks. The word is a convenient aid in describing shells, but it does not refer to a very precise part of shell anatomy: the spire consists of all of the whorls except for the body whorl...
and a siphonal canal
Siphonal canal
Some sea marine gastropods have a soft tubular anterior extension of the mantle called a siphon through which water is drawn into the mantle cavity and over the gill and which serves as a chemoreceptor to locate food. In many carnivorous snails, where the siphon is particularly long, the structure...
.

There are also many species often called "conch" that are not in the family Strombidae, and these include Melongena
Melongena
Melongena is a genus of sea snails, marine gastropod mollusks in the family Melongenidae, the crown conches and their allies.-Species:Species within the genus Melongena include:* Melongena bicolor...
species (family Melongenidae
Melongenidae
Melongenidae, the crown conchs, busycon whelks and their relatives, are a taxonomic family of large to very large marine gastropods in the clade Neogastropoda.- Taxonomy :Genera Busycon and Busycotypus were placed in Melongenidae...
), and the horse conch Pleuroploca gigantea
Pleuroploca gigantea
Pleuroploca gigantea, common name the Florida horse conch, is a species of extremely large predatory subtropical and tropical sea snail, a marine gastropod mollusk in the family Fasciolariidae, the spindle snails, tulip snails and their allies....
(family Fasciolariidae
Fasciolariidae
Fasciolariidae, common name the "tulip snails and spindle snails", is a family of small to large sea snails, marine gastropod mollusks in the superfamily Buccinoidea....
).

I'm taking a trip to Curacao soon and have always been interested in eating some Conch and have a few questions 1. How easy is it to find while jus...