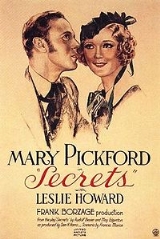 Encyclopedia
Secrets is a 1933
1933 in film
-Events:* March 2 - King Kong premieres in New York City.* June 6 - The first drive-in theater opens, in Camden, New Jersey.* British Film Institute founded....
Western
Western (genre)
The Western is a genre of various visual arts, such as film, television, radio, literature, painting and others. Westerns are devoted to telling stories set primarily in the latter half of the 19th century in the American Old West, hence the name. Some Westerns are set as early as the Battle of...
film directed by Frank Borzage
Frank Borzage
Frank Borzage was an American film director and actor.-Biography:Frank Borzage's father, Luigi Borzaga, was born in Ronzone, in 1859. As a stonemason, he sometimes worked in Switzerland; he met his future wife, Maria Ruegg , where she worked in a silk factory...
and starring Mary Pickford
Mary Pickford
Mary Pickford was a Canadian-born motion picture actress, co-founder of the film studio United Artists and one of the original 36 founders of the Academy of Motion Picture Arts and Sciences...
in her last film role. The film is a remake of Secrets
Secrets (1924 film)
Secrets is a silent film directed by Frank Borzage. The film is based upon a 1872 opera called Don César de Bazan and was remade in 1933 with Mary Pickford in the leading role. Although the film was never released on video or DVD, copies still exist.-Plot:The films opens in present. 75-year-old...
(1924), a silent film
Silent film
A silent film is a film with no synchronized recorded sound, especially with no spoken dialogue. In silent films for entertainment the dialogue is transmitted through muted gestures, pantomime and title cards...
starring Norma Talmadge
Norma Talmadge
Norma Talmadge was an American actress and film producer of the silent era. A major box office draw for more than a decade, her career reached a peak in the early 1920s, when she ranked among the most popular idols of the American screen.Her most famous film was Smilin’ Through , but she also...
.

Wealthy banker and shipowner William Marlowe and his wife Martha have their hearts set on marrying their daughter Mary to English aristocrat Lord Hurley. However, Mary has other ideas. She has fallen in love with John Carlton, one of her father's clerks. When Mr. Marlowe finds out, he fires John. John decides to go west to make his fortune, then return for Mary, but she insists on going with him. They elope.

The couple settle in California and after a while, have a herd of cattle and a baby boy. While John and hired hand Sunshine are away getting supplies, notorious outlaw Jake Houser and his gang show up and rustle the herd
Cattle raiding
Cattle raiding is the act of stealing cattle.In Australia, such stealing is often referred to as duffing, and the person as a duffer...
. John rounds up the other ranchers. They catch and hang three of the gang, including Jake's brother, but Jake gets away. Vowing revenge, the outlaw and his men attack the Carlton home. Fortunately, help arrives and the rustlers are wiped out. The baby succumbs to illness during the gunfight.

Years pass, and the Carltons prosper greatly. Four more children are born, and John runs for governor of the state. They host a party on the night before the election at their mansion. Lolita Martinez, John's lover, scandalizes everyone by showing up. In private, she insists that Mary free John to marry her. Mary agrees, but John spurns his mistress and begs his wife's forgiveness; she gives it on condition that he tell her about all his prior lovers. Lolita makes public their affair, but John still wins the election.

Later, he becomes a senator, serving for thirty years in Washington, D.C.
Washington, D.C.
Washington, D.C., formally the District of Columbia and commonly referred to as Washington, "the District", or simply D.C., is the capital of the United States. On July 16, 1790, the United States Congress approved the creation of a permanent national capital as permitted by the U.S. Constitution....
before deciding to retire and move back to California. This puzzles the couple's grown children; Mary explains that they want time for themselves, to enjoy secrets they can share with no one else. When their offspring still oppose their decision, the couple sneak away.