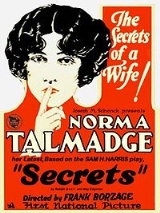 Encyclopedia
Secrets is a silent film
Silent film
A silent film is a film with no synchronized recorded sound, especially with no spoken dialogue. In silent films for entertainment the dialogue is transmitted through muted gestures, pantomime and title cards...
directed by Frank Borzage
Frank Borzage
Frank Borzage was an American film director and actor.-Biography:Frank Borzage's father, Luigi Borzaga, was born in Ronzone, in 1859. As a stonemason, he sometimes worked in Switzerland; he met his future wife, Maria Ruegg , where she worked in a silk factory...
. The film is based upon a 1872 opera
Opera
Opera is an art form in which singers and musicians perform a dramatic work combining text and musical score, usually in a theatrical setting. Opera incorporates many of the elements of spoken theatre, such as acting, scenery, and costumes and sometimes includes dance...
called Don César de Bazan
Don César de Bazan
Don César de Bazan is an opéra comique in four acts by Jules Massenet to a French libretto by Adolphe d'Ennery, Jean Henri Dumanoir and Jules Chantepie, based on the drama Ruy Blas by Victor Hugo...
and was remade in 1933
Secrets (film)
Secrets is a 1933 Western film directed by Frank Borzage and starring Mary Pickford in her last film role. The film is a remake of Secrets , a silent film starring Norma Talmadge....
with Mary Pickford
Mary Pickford
Mary Pickford was a Canadian-born motion picture actress, co-founder of the film studio United Artists and one of the original 36 founders of the Academy of Motion Picture Arts and Sciences...
in the leading role. Although the film was never released on video or DVD, copies still exist.

The films opens in present. 75-year-old Mary Carlton is depressed over her husband John's illness. She feels her life has no use if he dies. She starts reading her diary, after which the film jumps to 1865 in the time she fell in love with John. She feels she has to hide her love for her strict mother, fearing she will disapprove because of their social class differences. Mary lives within the very wealthy Marlowe family and grows up to be a lady with manners, while John is a working class employee.

When her parents find out about the affair, they are outrageous. They forbid her from ever seeing John again. However, Mary tells them she only loves John and will never marry anybody if she can't see him anymore. Her father William locks her into her own room until she stops being a rebel. Meanwhile, she receives a letter from John, who announces he has been fired over their love affair. Later that night, John sneaks into her room by the balcony and announces he will leave for America. Despite knowing her parents won't ever talk to her again, she decides to go with him.

Before they can leave, William comes in. He tells Mary he will send her to Scotland to live with her grandmother. After he leaves the room, Mary writes a farewell letter and sneaks off with John. By the time it's 1870, she lives with John in a poor house. He works all day, while Mary is giving birth to a son. One day, a gang threatens to kill John. He wants to surrender so they won't kill Mary and the baby as well, but Mary demands him to fight. He does as his wife tells him and eventually defeats the gang.

Years pass by. In 1888, Mary celebrates her 39th birthday and is having contact with her family again. She finds out John is having a mistress, Estelle. Mary feels humiliated, but Estelle makes things worse when she confronts Mary with the fact she can't make her husband happy. Mary grants her husband a divorce, but he doesn't want to leave her. He admits he has had an affair with Estelle, but that it didn't mean anything. They reunite, although John announces he has lost all of his money. The film goes back to present, where Mary is told her husband has recovered from his illness.