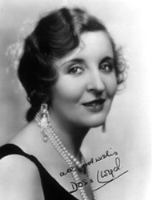 Encyclopedia
Hessy Doris Lloyd was an English
England
England is a country that is part of the United Kingdom. It shares land borders with Scotland to the north and Wales to the west; the Irish Sea is to the north west, the Celtic Sea to the south west, with the North Sea to the east and the English Channel to the south separating it from continental...
actress.

She appeared in over 150 films between 1920
1920 in film
The year 1920 in film involved some significant events.-Events:* November 27 - The Mark of Zorro, starring Douglas Fairbanks opens.-Top grossing films :-Films released in 1920:U.S.A. unless stated*The $1,000,000 Reward...
and 1967
1967 in film
The year 1967 in film involved some significant events. It is widely considered as one of the most ground-breaking years in film.-Events:* December 26 - The Beatles Magical Mystery Tour airs on British television....
, including the 1933 low-budget Monogram Pictures
Monogram Pictures
Monogram Pictures Corporation is a Hollywood studio that produced and released films, most on low budgets, between 1931 and 1953, when the firm completed a transition to the name Allied Artists Pictures Corporation. Monogram is considered a leader among the smaller studios sometimes referred to...
version of Oliver Twist
Oliver Twist (1933 film)
Oliver Twist is a 1933 American film directed by William J. Cowen. It is an adaptation of Charles Dickens's popular novel with the same name and was the first sound version of the classic. It stars Irving Pichel as Fagin, Dickie Moore as Oliver, Doris Lloyd as Nancy, and William "Stage" Boyd as...
, in which she played Nancy. Irving Pichel
Irving Pichel
Irving Pichel was an American actor and film director. He married Violette Wilson, daughter of Jackson Stitt Wilson, a Methodist minister and Socialist mayor of Berkeley, California. Her sister was actress Viola Barry...
starred as Fagin and Dickie Moore as Oliver.