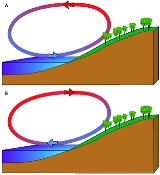 A sea-breeze is a wind
Wind
Wind is the flow of gases on a large scale. On Earth, wind consists of the bulk movement of air. In outer space, solar wind is the movement of gases or charged particles from the sun through space, while planetary wind is the outgassing of light chemical elements from a planet's atmosphere into space...
from the sea that develops over land near coasts. It is formed by increasing temperature differences between the land and water; these create a pressure minimum over the land due to its relative warmth, and forces higher pressure, cooler air from the sea to move inland. Generally, air temperature gets cooler relative to nearby locations as one moves closer to a large body of water.

The sea has a greater heat capacity
Heat capacity
Heat capacity , or thermal capacity, is the measurable physical quantity that characterizes the amount of heat required to change a substance's temperature by a given amount...
than land and therefore is more able to absorb heat than the land, so the surface of the sea warms up slower than the land's surface. As the temperature of the surface of the land
Landform
A landform or physical feature in the earth sciences and geology sub-fields, comprises a geomorphological unit, and is largely defined by its surface form and location in the landscape, as part of the terrain, and as such, is typically an element of topography...
rises, the land heats the air above it. The warm air is less dense and so it rises. This rising air over the land lowers the sea level pressure by about 0.2%. The cooler air above the sea, now with higher sea level pressure, flows towards the land into the lower pressure, creating a cooler breeze near the coast. The strength of the sea breeze is directly proportional to the temperature difference between the land and the sea. If the environmental wind field is greater than 8 knots and opposing the direction of a possible sea breeze, the sea breeze is not likely to develop.

A sea-breeze front is a weather front
Weather front
A weather front is a boundary separating two masses of air of different densities, and is the principal cause of meteorological phenomena. In surface weather analyses, fronts are depicted using various colored lines and symbols, depending on the type of front...
created by a sea-breeze, also known as a convergence zone
Convergence zone
Convergence zone usually refers to a region in the atmosphere where two prevailing flows meet and interact, usually resulting in distinctive weather conditions....
. The cold air from the sea meets the warmer air from the land and creates a boundary like a shallow cold front
Cold front
A cold front is defined as the leading edge of a cooler mass of air, replacing a warmer mass of air.-Development of cold front:The cooler and denser air wedges under the less-dense warmer air, lifting it...
. When powerful this front creates cumulus
Cumulus cloud
Cumulus clouds are a type of cloud with noticeable vertical development and clearly defined edges. Cumulus means "heap" or "pile" in Latin. They are often described as "puffy" or "cotton-like" in appearance. Cumulus clouds may appear alone, in lines, or in clusters...
clouds, and if the air is humid and unstable, cumulonimbus
Cumulonimbus cloud
Cumulonimbus is a towering vertical cloud that is very tall, dense, and involved in thunderstorms and other inclement weather. Cumulonimbus originates from Latin: Cumulus "Heap" and nimbus "rain". It is a result of atmospheric instability. These clouds can form alone, in clusters, or along a cold...
clouds, the front can sometimes trigger thunderstorm
Thunderstorm
A thunderstorm, also known as an electrical storm, a lightning storm, thundershower or simply a storm is a form of weather characterized by the presence of lightning and its acoustic effect on the Earth's atmosphere known as thunder. The meteorologically assigned cloud type associated with the...
s. If the flow aloft is aligned with the direction of the sea breeze, places experiencing the sea breeze frontal passage will be benign, or fair, weather for the remainder of the day. At the front warm air continues to flow upward and cold air continually moves in to replace it and so the front moves progressively inland. Its speed depends on whether it is assisted or hampered by the prevailing wind, and the strength of the thermal contrast between land and sea. At night, the sea-breeze usually vanishes.

Thunderstorms caused by powerful sea breeze fronts frequently occur in Florida
Florida
Florida is a state in the southeastern United States, located on the nation's Atlantic and Gulf coasts. It is bordered to the west by the Gulf of Mexico, to the north by Alabama and Georgia and to the east by the Atlantic Ocean. With a population of 18,801,310 as measured by the 2010 census, it...
, a peninsula
Peninsula
A peninsula is a piece of land that is bordered by water on three sides but connected to mainland. In many Germanic and Celtic languages and also in Baltic, Slavic and Hungarian, peninsulas are called "half-islands"....
surrounded on both the east and west by the Atlantic Ocean
Atlantic Ocean
The Atlantic Ocean is the second-largest of the world's oceanic divisions. With a total area of about , it covers approximately 20% of the Earth's surface and about 26% of its water surface area...
and Gulf of Mexico
Gulf of Mexico
The Gulf of Mexico is a partially landlocked ocean basin largely surrounded by the North American continent and the island of Cuba. It is bounded on the northeast, north and northwest by the Gulf Coast of the United States, on the southwest and south by Mexico, and on the southeast by Cuba. In...
, respectively. No matter which direction the winds are blowing, they are always off the water, thus making Florida the place most often struck by lightning
Lightning
Lightning is an atmospheric electrostatic discharge accompanied by thunder, which typically occurs during thunderstorms, and sometimes during volcanic eruptions or dust storms...
in the United States
United States
The United States of America is a federal constitutional republic comprising fifty states and a federal district...
, and one of the most on Earth. These storms also can produce significant hail
Hail
Hail is a form of solid precipitation. It consists of balls or irregular lumps of ice, each of which is referred to as a hail stone. Hail stones on Earth consist mostly of water ice and measure between and in diameter, with the larger stones coming from severe thunderstorms...
due to the tremendous uplift
Tectonic uplift
Tectonic uplift is a geological process most often caused by plate tectonics which increases elevation. The opposite of uplift is subsidence, which results in a decrease in elevation. Uplift may be orogenic or isostatic.-Orogenic uplift:...
it causes in the atmosphere
Earth's atmosphere
The atmosphere of Earth is a layer of gases surrounding the planet Earth that is retained by Earth's gravity. The atmosphere protects life on Earth by absorbing ultraviolet solar radiation, warming the surface through heat retention , and reducing temperature extremes between day and night...
especially during times when the upper atmosphere is cooler such as during the spring or fall.

On calm summer afternoons with little prevailing wind, sea-breezes from both coasts may collide in the middle, creating especially severe storms down the center of the state. These thunderstorms can drift towards either the west or east coast depending on the relative strengths of the sea-breezes, and sometimes survive to move out over the water at night, creating spectacular cloud-to-cloud lightning shows for hours after sunset.

At night, the land cools off quicker than the ocean due to differences in their heat capacity, which forces the dying of the daytime sea breeze. If the land cools below that of the adjacent sea surface temperature
Sea surface temperature
Sea surface temperature is the water temperature close to the oceans surface. The exact meaning of surface varies according to the measurement method used, but it is between and below the sea surface. Air masses in the Earth's atmosphere are highly modified by sea surface temperatures within a...
, the pressure over the water will be lower than that of the land, setting up a land breeze as long as the environmental surface wind pattern is not strong enough to oppose it. If there is sufficient moisture and instability available, the land breeze can cause showers or even thunderstorms, over the water. Overnight thunderstorm development offshore due to the land breeze can be a good predictor for the activity on land the following day, as long as there are no expected changes to the weather pattern over the following 12–24 hours. This is mainly because the strength of the land breeze is weaker than the sea breeze. The land breeze will die once the land warms up again the next morning.