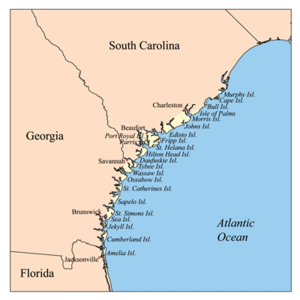 The Sea Islands are a chain of tidal and barrier island
Barrier island
Barrier islands, a coastal landform and a type of barrier system, are relatively narrow strips of sand that parallel the mainland coast. They usually occur in chains, consisting of anything from a few islands to more than a dozen...
s on the Atlantic Ocean
Atlantic Ocean
The Atlantic Ocean is the second-largest of the world's oceanic divisions. With a total area of about , it covers approximately 20% of the Earth's surface and about 26% of its water surface area...
coast of the United States
United States
The United States of America is a federal constitutional republic comprising fifty states and a federal district...
. They number over 100, and are located between the mouths of the Santee
Santee River
The Santee River is a river in South Carolina in the United States, long. The Santee and its tributaries provide the principal drainage and navigation for the central coastal plain of South Carolina, emptying into the Atlantic Ocean approximately from its farthest headwater on the Catawba River...
and St. Johns River
St. Johns River
The St. Johns River is the longest river in the U.S. state of Florida and its most significant for commercial and recreational use. At long, it winds through or borders twelve counties, three of which are the state's largest. The drop in elevation from the headwaters to the mouth is less than ;...
s along the coast of the U.S. state
U.S. state
A U.S. state is any one of the 50 federated states of the United States of America that share sovereignty with the federal government. Because of this shared sovereignty, an American is a citizen both of the federal entity and of his or her state of domicile. Four states use the official title of...
s of South Carolina
South Carolina
South Carolina is a state in the Deep South of the United States that borders Georgia to the south, North Carolina to the north, and the Atlantic Ocean to the east. Originally part of the Province of Carolina, the Province of South Carolina was one of the 13 colonies that declared independence...
, Georgia
Georgia (U.S. state)
Georgia is a state located in the southeastern United States. It was established in 1732, the last of the original Thirteen Colonies. The state is named after King George II of Great Britain. Georgia was the fourth state to ratify the United States Constitution, on January 2, 1788...
and Florida
Florida
Florida is a state in the southeastern United States, located on the nation's Atlantic and Gulf coasts. It is bordered to the west by the Gulf of Mexico, to the north by Alabama and Georgia and to the east by the Atlantic Ocean. With a population of 18,801,310 as measured by the 2010 census, it...
.

Settled by indigenous
Indigenous peoples
Indigenous peoples are ethnic groups that are defined as indigenous according to one of the various definitions of the term, there is no universally accepted definition but most of which carry connotations of being the "original inhabitants" of a territory....
cultures for thousands of years, the islands were an early site of the Spanish
Spain
Spain , officially the Kingdom of Spain languages]] under the European Charter for Regional or Minority Languages. In each of these, Spain's official name is as follows:;;;;;;), is a country and member state of the European Union located in southwestern Europe on the Iberian Peninsula...
founding of colonial
Colony
In politics and history, a colony is a territory under the immediate political control of a state. For colonies in antiquity, city-states would often found their own colonies. Some colonies were historically countries, while others were territories without definite statehood from their inception....
missions
Mission (station)
A religious mission or mission station is a location for missionary work.While primarily a Christian term, the concept of the religious "mission" is also used prominently by the Church of Scientology and their Scientology Missions International....
. Historically the Spanish influenced the Guale
Guale
Guale was an historic Native American chiefdom along the coast of present-day Georgia and the Sea Islands. Spanish Florida established its Roman Catholic missionary system in the chiefdom in the late 16th century. During the late 17th century and early 18th century, Guale society was shattered...
and Mocama
Mocama
The Mocama were a Native American people who lived in the coastal areas of what are now northern Florida and southeastern Georgia. A Timucua group, they spoke the dialect known as Mocama, the best-attested dialect of the Timucua language. Their territory extended from about the Altamaha River in...
chiefdoms by establishing missions in their major settlements, from St. Catherine's Island south to Fort George Island (at present-day Jacksonville, Florida
Jacksonville, Florida
Jacksonville is the largest city in the U.S. state of Florida in terms of both population and land area, and the largest city by area in the contiguous United States. It is the county seat of Duval County, with which the city government consolidated in 1968...
). Both chiefdoms extended to the coastal areas on the mainland. The Mocama Province included territory to the St. Johns River
St. Johns River
The St. Johns River is the longest river in the U.S. state of Florida and its most significant for commercial and recreational use. At long, it winds through or borders twelve counties, three of which are the state's largest. The drop in elevation from the headwaters to the mouth is less than ;...
in present-day Florida. The system ended under pressure of repeated raids by English South Carolina colonists and Indian allies. Spain ceded its territory of Florida to Great Britain in 1763.

After 18th-century European-American settlement of Georgia and Florida, planters imported enslaved
Slavery
Slavery is a system under which people are treated as property to be bought and sold, and are forced to work. Slaves can be held against their will from the time of their capture, purchase or birth, and deprived of the right to leave, to refuse to work, or to demand compensation...
Africans as laborers. Many were used to work the cotton, rice and indigo plantations on the sea islands. The slaves developed the notable and distinct Gullah
Gullah
The Gullah are African Americans who live in the Lowcountry region of South Carolina and Georgia, which includes both the coastal plain and the Sea Islands....
/Geechee Creole
Creole peoples
The term Creole and its cognates in other languages — such as crioulo, criollo, créole, kriolu, criol, kreyol, kreol, kriulo, kriol, krio, etc. — have been applied to people in different countries and epochs, with rather different meanings...
culture and language which has survived to contemporary times. The islands now are known for resort, recreational, and residential development.

During the American Civil War
American Civil War
The American Civil War was a civil war fought in the United States of America. In response to the election of Abraham Lincoln as President of the United States, 11 southern slave states declared their secession from the United States and formed the Confederate States of America ; the other 25...
, the Union
Union (American Civil War)
During the American Civil War, the Union was a name used to refer to the federal government of the United States, which was supported by the twenty free states and five border slave states. It was opposed by 11 southern slave states that had declared a secession to join together to form the...
Navy and the Union Army soon occupied the islands. The white planter families had fled to other locations on the mainland, sometimes leaving behind their slaves. The blacks largely ran their own lives during this period. They had already created cohesive communities, because planter families often stayed on the mainland to avoid malaria and isolation. Many slaves worked on the rice and indigo plantations, and they had limited interaction with whites, enabling them to develop their own distinct culture. The Union Army managed the plantations and allowed plots to slaves for farming.

After President Abraham Lincoln
Abraham Lincoln
Abraham Lincoln was the 16th President of the United States, serving from March 1861 until his assassination in April 1865. He successfully led his country through a great constitutional, military and moral crisis – the American Civil War – preserving the Union, while ending slavery, and...
's Emancipation Proclamation
Emancipation Proclamation
The Emancipation Proclamation is an executive order issued by United States President Abraham Lincoln on January 1, 1863, during the American Civil War using his war powers. It proclaimed the freedom of 3.1 million of the nation's 4 million slaves, and immediately freed 50,000 of them, with nearly...
was effective on January 1, 1863, more than 5,000 slaves on Union-occupied islands obtained their freedom. Although they hoped to get land as compensation for having been held in slavery, the planter families soon reclaimed their properties. Many of the freedmen worked on their former plantations as sharecroppers, tenant farmers or laborers.

The islands were damaged by the Sea Islands Hurricane in 1893.

Sea Islands in Chatham County
Chatham County, Georgia
Chatham County is a county located in the U.S. state of Georgia. The county seat and largest city is Savannah. In the official US Census of 2010, Chatham County had a total population of 265,128 . Chatham is the most populous Georgia county outside the Atlanta metropolitan area...

Sea Islands in McIntosh County
McIntosh County, Georgia
McIntosh County is a county located in the U.S. state of Georgia. It is part of the Brunswick, Georgia, Metropolitan Statistical Area which encompasses all of McIntosh, Glynn, and Brantley counties. As of 2010, the population is 14,333. The county seat is Darien.-History:McIntosh County was split...

Sea Islands in Camden County
Camden County, Georgia
Camden County is a county located in the U.S. state of Georgia. It is one of the original counties of Georgia, created February 5, 1777. As of 2000, the population was 43,664. The 2007 Census Estimate shows a population of 48,689. The county seat is Woodbine.-History:The first European to land...