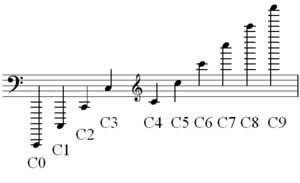 Scientific pitch notation is one of several methods that name the note
Note
In music, the term note has two primary meanings:#A sign used in musical notation to represent the relative duration and pitch of a sound;#A pitched sound itself....
s of the standard Western
Classical music
Classical music is the art music produced in, or rooted in, the traditions of Western liturgical and secular music, encompassing a broad period from roughly the 11th century to present times...
chromatic scale
Chromatic scale
The chromatic scale is a musical scale with twelve pitches, each a semitone apart. On a modern piano or other equal-tempered instrument, all the half steps are the same size...
by combining a letter-name, accidentals
Accidental (music)
In music, an accidental is a note whose pitch is not a member of a scale or mode indicated by the most recently applied key signature. In musical notation, the symbols used to mark such notes, sharps , flats , and naturals , may also be called accidentals...
, and a number identifying the pitch
Pitch (music)
Pitch is an auditory perceptual property that allows the ordering of sounds on a frequency-related scale.Pitches are compared as "higher" and "lower" in the sense associated with musical melodies,...
's octave
Octave
In music, an octave is the interval between one musical pitch and another with half or double its frequency. The octave relationship is a natural phenomenon that has been referred to as the "basic miracle of music", the use of which is "common in most musical systems"...
. The definition of scientific pitch notation in this article is that proposed to the Acoustical Society of America
Acoustical Society of America
The Acoustical Society of America is an international scientific society dedicated to increasing and diffusing the knowledge of acoustics and its practical applications.-History:...
in 1939, where C0 is in the region of the lowest possible audible frequency at about 16 Hz.

Scientific pitch notation is a logarithm
Logarithm
The logarithm of a number is the exponent by which another fixed value, the base, has to be raised to produce that number. For example, the logarithm of 1000 to base 10 is 3, because 1000 is 10 to the power 3: More generally, if x = by, then y is the logarithm of x to base b, and is written...
ic frequency
Frequency
Frequency is the number of occurrences of a repeating event per unit time. It is also referred to as temporal frequency.The period is the duration of one cycle in a repeating event, so the period is the reciprocal of the frequency...
scale.

Scientific pitch notation is an example of a note-octave notation (see below).

The transition in octave number occurs on the note C. Hence in ascending the white notes on a keyboard, "C4" follows "B3", and "A4" refers to the A above middle C
Middle C
C or Do is the first note of the fixed-Do solfège scale. Its enharmonic is B.-Middle C:Middle C is designated C4 in scientific pitch notation because of the note's position as the fourth C key on a standard 88-key piano keyboard...
(that is, A440, the note that has a frequency of 440 Hz
Hertz
The hertz is the SI unit of frequency defined as the number of cycles per second of a periodic phenomenon. One of its most common uses is the description of the sine wave, particularly those used in radio and audio applications....
).

Scientific pitch notation is often used to specify the range of an instrument. It provides an unambiguous means of identifying a note in terms of musical notation rather than frequency, while at the same time avoiding the transposition conventions that are used in writing the music for instruments such as the clarinet
Clarinet
The clarinet is a musical instrument of woodwind type. The name derives from adding the suffix -et to the Italian word clarino , as the first clarinets had a strident tone similar to that of a trumpet. The instrument has an approximately cylindrical bore, and uses a single reed...
and guitar
Guitar
The guitar is a plucked string instrument, usually played with fingers or a pick. The guitar consists of a body with a rigid neck to which the strings, generally six in number, are attached. Guitars are traditionally constructed of various woods and strung with animal gut or, more recently, with...
. The conventional octave naming system, where for example C0 is written as ′′C, or CCC in Helmholtz pitch notation
Helmholtz pitch notation
Helmholtz pitch notation is a musical system for naming notes of the Western chromatic scale. Developed by the German scientist Hermann von Helmholtz, it uses a combination of upper and lower case letters , and the sub- and super-prime symbols to describe each individual note of the scale...
, or referred to as subcontra C, and C4 is written as c′ or one-lined C, applies to the written notes that may or may not be transposed. For example, a d′ played on a B trumpet
Trumpet
The trumpet is the musical instrument with the highest register in the brass family. Trumpets are among the oldest musical instruments, dating back to at least 1500 BCE. They are played by blowing air through closed lips, producing a "buzzing" sound which starts a standing wave vibration in the air...
is actually a C4 in scientific pitch notation.

Although pitch notation is intended to describe audible sounds, it can also be used to specify the frequency of non-audible phenomena. For example, when the Chandra X-ray Observatory
Chandra X-ray Observatory
The Chandra X-ray Observatory is a satellite launched on STS-93 by NASA on July 23, 1999. It was named in honor of Indian-American physicist Subrahmanyan Chandrasekhar who is known for determining the maximum mass for white dwarfs. "Chandra" also means "moon" or "luminous" in Sanskrit.Chandra...
observed the waves of pressure fronts propagating away from a black hole, the one oscillation every 10 million
10000000 (number)
Ten million is the natural number following 9999999 and preceding 10000001.In scientific notation, it is written as 107.In South Asia, it is known as the Crore.- Selected 8-digit numbers :*10077696 = 69...
years was described in the press as corresponding to the B fifty-seven octaves below middle C (or B−53).

Notation that appears to be scientific pitch notation may actually be based on an alternative octave numbering. While they are still note-octave systems, if they are called "scientific pitch notation", this is certainly an error. For example, MIDI software and hardware often uses C5 or C3 to represent middle C (note 60). This is because the MIDI standard does not specify a particular octave numbering.

This creates a linear pitch space in which octaves have size 12, semitone
Semitone
A semitone, also called a half step or a half tone, is the smallest musical interval commonly used in Western tonal music, and it is considered the most dissonant when sounded harmonically....
s (the distance between adjacent keys on the piano keyboard) have size 1, and A440 is assigned the number 69. Distance in this space corresponds to musical distance as measured in psychological experiments and understood by musicians. (An equal-tempered semitone is subdivided into 100 cents.) The system is flexible enough to include "microtones" not found on standard piano keyboards. For example, the pitch halfway between C (60) and C (61) can be labeled 60.5.

The standard proposed to the Acoustical Society Of America explicitly states a logarithmic scale for frequency, which excludes meantone temperament, and the base frequency it uses gives A4 a frequency of almost exactly 440 Hz (it comes out as approximately 439.96 Hz, which is a difference of 0.01 cents). However, when dealing with earlier music that did not use equal temperament, it is understandably easier to simply refer to notes by their closest modern equivalent, as opposed to specifying the difference using cents every time.

There is some possible confusion regarding the assignment of an octave to C or B. The convention is that the letter name is first combined with the Arabic numeral to determine a specific pitch, which is then altered by applying accidentals. For example, the symbol C4 means "the pitch one chromatic step below the pitch C4" and not "the pitch-class C in octave 4", so C4 is the same pitch as B3, not B4. Similarly, at the other end of the fourth octave, B4 is the same pitch as C5, not C4.

Scientific pitch is an absolute pitch standard that sets middle C (or C4) to 256 Hz. It was introduced in the early 20th century. A4 on this scale is approximately 431 Hz, noticeably different from the current concert pitch standard of 440 Hz. It is no longer used by concert orchestras but is still sometimes favoured in scientific writings for the convenience of all the octaves of C being an exact round number in binary counting
Binary numeral system
The binary numeral system, or base-2 number system, represents numeric values using two symbols, 0 and 1. More specifically, the usual base-2 system is a positional notation with a radix of 2...
. The number to the base ten, (256)10, is equal to (100000000)2 to the base two. More usefully, the octaves of C remain a whole number all the way down to 1 Hz (in either counting system).