Encyclopedia
Keyboard
Keyboard instrument
A keyboard instrument is a musical instrument which is played using a musical keyboard. The most common of these is the piano. Other widely used keyboard instruments include organs of various types as well as other mechanical, electromechanical and electronic instruments...
/ Piano
Piano
The piano is a musical instrument played by means of a keyboard. It is one of the most popular instruments in the world. Widely used in classical and jazz music for solo performances, ensemble use, chamber music and accompaniment, the piano is also very popular as an aid to composing and rehearsal...
tablature is a system of tablature or musical notation
Musical notation
Music notation or musical notation is any system that represents aurally perceived music, through the use of written symbols.-History:...
written using letters and numbers that designate the timing and keys to hit on a keyboard or piano. Modern piano tablature is based on scientific pitch notation
Scientific pitch notation
Scientific pitch notation is one of several methods that name the notes of the standard Western chromatic scale by combining a letter-name, accidentals, and a number identifying the pitch's octave...
, a variation of letter notation
Letter notation
In music, letter notation is a system of representing a set of pitches, for example, the notes of a scale, by letters. For the complete Western diatonic scale, for example, these would be the letters A-G, possibly with a trailing symbol to indicate a half-step raise--, or a half-step lowering...
which has roots going back to the 11th century when Italian Guido of Arezzo
Guido of Arezzo
Guido of Arezzo or Guido Aretinus or Guido da Arezzo or Guido Monaco or Guido d'Arezzo was a music theorist of the Medieval era...
developed Solfege
Solfege
In music, solfège is a pedagogical solmization technique for the teaching of sight-singing in which each note of the score is sung to a special syllable, called a solfège syllable...
.
An example of modern piano tab notation - the scale of "f" played on 2 octaves:


This is what the system looks like on an actual keyboard: 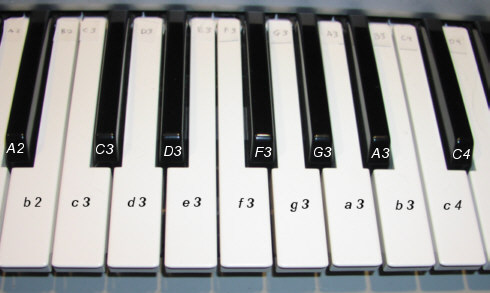 An alternative version of keyboard tablature (though less frequently seen) is based on a periodic system of numbers, like most modern tablatures, although incorporating negative and positive numbers assigned to the clefs (as positive for treble, and negative for bass). This particular method uses the middle C
Middle C
C or Do is the first note of the fixed-Do solfège scale. Its enharmonic is B.-Middle C:Middle C is designated C4 in scientific pitch notation because of the note's position as the fourth C key on a standard 88-key piano keyboard...
as the reference point. Unlike many tab forms the keyboard tab has far different placement values, meaning, regardless of the arrangement of the numbers it can still have the same value, but is displayed differently.
Visual Sample

The numbers are projected and arranged by value. The particular number is placed in the corresponding column; however, columns are "pushed upward" when notating chords. This "column" system is not affective of the tab itself, more so the appearance, thus it is basically irrelevant.

"Gliss"
A "gliss", or "slide". Shows the start location of the gliss and the stop location.
"Tremble"
Rapid alternating between two notes.
"Pedal Use"
Shows when the pedal is held (---) and when released (X).

"Inaudible Note"
An inaudible or hard to hear note.