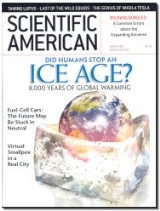 Encyclopedia
Scientific American is a popular science
Popular science
Popular science, sometimes called literature of science, is interpretation of science intended for a general audience. While science journalism focuses on recent scientific developments, popular science is broad-ranging, often written by scientists as well as journalists, and is presented in many...
magazine. It is notable for its long history of presenting science monthly to an educated but not necessarily scientific public, through its careful attention to the clarity of its text as well as the quality of its specially commissioned color graphics
Graphics
Graphics are visual presentations on some surface, such as a wall, canvas, computer screen, paper, or stone to brand, inform, illustrate, or entertain. Examples are photographs, drawings, Line Art, graphs, diagrams, typography, numbers, symbols, geometric designs, maps, engineering drawings,or...
. Many famous scientists, including Einstein, have contributed articles in the past 166 years. It is the oldest continuously published monthly magazine in America.

Scientific American was founded by inventor and publisher Rufus M. Porter
Rufus Porter
For the American football player see Rufus Porter .For the American poet see Rufus L. Porter.Rufus M. Porter was an American painter, inventor, and founder of Scientific American magazine....
in 1845 as a four page weekly newspaper. Throughout its early years, much emphasis was placed on reports of what was going on at the U.S. Patent Office
United States Patent and Trademark Office
The United States Patent and Trademark Office is an agency in the United States Department of Commerce that issues patents to inventors and businesses for their inventions, and trademark registration for product and intellectual property identification.The USPTO is based in Alexandria, Virginia,...
. It also reported on a broad range of inventions including perpetual motion
Perpetual motion
Perpetual motion describes hypothetical machines that operate or produce useful work indefinitely and, more generally, hypothetical machines that produce more work or energy than they consume, whether they might operate indefinitely or not....
machines, an 1860 device for buoying vessels by Abraham Lincoln
Abraham Lincoln
Abraham Lincoln was the 16th President of the United States, serving from March 1861 until his assassination in April 1865. He successfully led his country through a great constitutional, military and moral crisis – the American Civil War – preserving the Union, while ending slavery, and...
, and the universal joint
Universal joint
A universal joint, universal coupling, U joint, Cardan joint, Hardy-Spicer joint, or Hooke's joint is a joint or coupling in a rigid rod that allows the rod to 'bend' in any direction, and is commonly used in shafts that transmit rotary motion...
which now finds place in nearly every automobile
Automobile
An automobile, autocar, motor car or car is a wheeled motor vehicle used for transporting passengers, which also carries its own engine or motor...
manufactured. Current issues feature a "this date in history" section, featuring excerpts from articles originally published 50, 100, and 150 years earlier; topics include humorous incidents, wrong-headed theories, and noteworthy advances in the history of science and technology.

In the years after World War II, the magazine was in steep decline. In 1948, three partners who were planning on starting a new popular science magazine, to be called The Sciences, instead purchased the assets of the old Scientific American and put its name on the designs they had created for their new magazine. Thus the partners—publisher Gerard Piel
Gerard Piel
Gerard Piel was the publisher of the new Scientific American magazine starting in 1948. He wrote for magazines, including The Nation, and published books on science for the general public.-Biography:...
, editor Dennis Flanagan
Dennis Flanagan
Dennis Flanagan was an editor of Scientific American starting in 1947.He worked at Scientific American for more than 30 years starting in 1947. He was married to author Ellen Raskin....
, and general manager Donald H. Miller, Jr.—created essentially a new magazine. Miller retired in 1979, Flanagan and Piel in 1984, when Gerard Piel's son Jonathan became president and editor; circulation had grown fifteen-fold since 1948. In 1986, it was sold to the Holtzbrinck
Georg von Holtzbrinck Publishing Group
Verlagsgruppe Georg von Holtzbrinck is a Stuttgart-based publishing holding company which owns publishing companies worldwide. Holtzbrinck has published everything from Salman Rushdie's Satanic Verses to classics by Agatha Christie, Jean-Paul Sartre, Ernest Hemingway and John Updike...
group of Germany, which has owned it since.

Scientific American published its first foreign edition in 1890, the Spanish-language La America Cientifica. Publication was suspended in 1905, and another 63 years would pass before another foreign-language edition appeared: In 1968, an Italian edition, Le Scienze
Le Scienze
Le Scienze is an Italian science magazine and is the Italian edition of Scientific American, published monthly since 1968. It was founded by industrial Alberto Mondadori and scientist Felice Ippolito....
, was launched, and a Japanese edition, Nikkei Science (日経サイエンス), followed three years later. Kexue (科学，“Science” in Chinese), a simplified Chinese edition launched in 1979, was the first Western magazine published in the People's Republic of China. Later in 2001, a newer edition, Global Science (环球科学), was published instead of Kexue, which shut down due to financial problems. In 1986, an Arabic-edition, Oloom magazine (مجلة العلوم), was published.

It originally styled itself "The Advocate of Industry and Enterprise" and "Journal of Mechanical and other Improvements". On the front page of the first issue was the engraving of "Improved Rail-Road Cars". The masthead had a commentary as follows:
The commentary under the illustration gives the flavor of its style at the time:
Also in the first issue is commentary on Signor Muzio Muzzi's proposed device for aerial navigation. 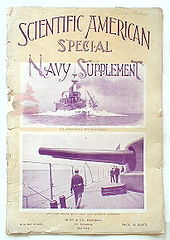 The Scientific American 50 award was started in 2002 to recognize contributions to science and technology during the magazine's previous year. The magazine's 50 awards cover many categories including agriculture, communications, defence, environment, and medical diagnostics. The complete list of each year's winners appear in the December issue of the magazine, as well as on the magazine's web site.

In April 1950, the U.S. Atomic Energy Commission
Atomic Energy Commission
Many countries have or have had an Atomic Energy Commission. These include:* Australian Atomic Energy Commission * Bangladesh Atomic Energy Commission * Commissariat à l'Énergie Atomique...
ordered "Scientific American" to cease publication of an issue containing an article by Hans Bethe
Hans Bethe
Hans Albrecht Bethe was a German-American nuclear physicist, and Nobel laureate in physics for his work on the theory of stellar nucleosynthesis. A versatile theoretical physicist, Bethe also made important contributions to quantum electrodynamics, nuclear physics, solid-state physics and...
that appeared to reveal classified information about the thermonuclear "H-bomb." Subsequent review of the material determined that the AEC had overreacted. The incident was important for the "new" "Scientific American"'s history, as the AEC's decision to burn 3000 copies of an early press-run of the magazine containing the offending material appeared to be "book burning
Book burning
Book burning, biblioclasm or libricide is the practice of destroying, often ceremoniously, books or other written material and media. In modern times, other forms of media, such as phonograph records, video tapes, and CDs have also been ceremoniously burned, torched, or shredded...
in a free society" when publisher Gerard Piel leaked the incident to the press.

In its January 2002 issue, Scientific American published a series of criticisms of the Bjorn Lomborg book The Skeptical Environmentalist
The Skeptical Environmentalist
The Skeptical Environmentalist: Measuring the Real State of the World is a book by Danish environmentalist author Bjørn Lomborg, controversial for its claims that overpopulation, declining energy resources, deforestation, species loss, water shortages, certain aspects of global warming, and an...
. Cato Institute
Cato Institute
The Cato Institute is a libertarian think tank headquartered in Washington, D.C. It was founded in 1977 by Edward H. Crane, who remains president and CEO, and Charles Koch, chairman of the board and chief executive officer of the conglomerate Koch Industries, Inc., the largest privately held...
fellow Patrick J. Michaels said the attacks came because the book "threatens billions of taxpayer dollars that go into the global change kitty every year." Journalist Ronald Bailey
Ronald Bailey
Ronald Bailey is the science editor for Reason magazine. He was born in San Antonio, Texas and raised in Washington County, Virginia, and attended the University of Virginia, where he earned a B.A...
called the criticism "disturbing" and "dishonest", writing, "The subhead of the review section, 'Science defends itself against The Skeptical Environmentalist, gives the show away: Religious and political views need to defend themselves against criticism, but science is supposed to be a process for determining the facts."

The May 2007 issue featured a column by Michael Shermer
Michael Shermer
Michael Brant Shermer is an American science writer, historian of science, founder of The Skeptics Society, and Editor in Chief of its magazine Skeptic, which is largely devoted to investigating pseudoscientific and supernatural claims. The Skeptics Society currently has over 55,000 members...
calling for a United States pullout from the Iraq War. In response, Wall Street Journal online columnist James Taranto
James Taranto
James Taranto is an American columnist for The Wall Street Journal, editor of its online editorial page OpinionJournal.com and a member of the newspaper's editorial board. He is best known for his daily online column Best of the Web Today...
jokingly called Scientific American "a liberal political magazine".

The publisher was criticized in 2009 when it notified collegiate libraries that subscribe to the journal that yearly subscription prices would increase by nearly 500% for print and 50% for online access to $1500 yearly.