Encyclopedia
Schwergewicht, oder Die Ehre der Nation (Heavyweight [also a play on inertia
Inertia
Inertia is the resistance of any physical object to a change in its state of motion or rest, or the tendency of an object to resist any change in its motion. It is proportional to an object's mass. The principle of inertia is one of the fundamental principles of classical physics which are used to...
] or The Glory of The Nation) is a burleske Operette with text and music by Ernst Krenek
Ernst Krenek
Ernst Krenek was an Austrian of Czech origin and, from 1945, American composer. He explored atonality and other modern styles and wrote a number of books, including Music Here and Now , a study of Johannes Ockeghem , and Horizons Circled: Reflections on my Music...
, his opus 55 and (with Der Diktator
Der Diktator
Der Diktator is a tragic opera in one act with words and music by Ernst Krenek, his opus 49 and the first of three one-acters which premiered on May 6, 1928 in Wiesbaden...
and Das geheime Königreich) the third of his 1928 one-acters. This satirical skit (as the composer was to call it in Horizons Circled) was provoked by the German ambassador's comment that sports heroes --and not artists-- were the true ambassadors of nations, and the title character Ochsenschwanz ("oxtail") is a reference to the boxer Max Schmeling
Max Schmeling
Maximillian Adolph Otto Siegfried Schmeling was a German boxer who was heavyweight champion of the world between 1930 and 1932. His two fights with Joe Louis in the late 1930s transcended boxing, and became worldwide social events because of their national associations...
.

Like Jonny spielt auf
Jonny spielt auf
Jonny spielt auf is an opera with words and music by Ernst Krenek about a jazz violinist. The work typified the cultural freedom of the 'golden era' of the Weimar Republic.-Performance history:...
, it makes frequent allusions to jazz
Jazz
Jazz is a musical style that originated at the beginning of the 20th century in African American communities in the Southern United States. It was born out of a mix of African and European music traditions. From its early development until the present, jazz has incorporated music from 19th and 20th...
, both in its use of percussion and banjo and in its "Tempo di Blues". There is even a nod to Mendelssohn
Felix Mendelssohn
Jakob Ludwig Felix Mendelssohn Barthóldy , use the form 'Mendelssohn' and not 'Mendelssohn Bartholdy'. The Grove Dictionary of Music and Musicians gives ' Felix Mendelssohn' as the entry, with 'Mendelssohn' used in the body text...
's Wedding March
Wedding March (Mendelssohn)
Felix Mendelssohn's "Wedding March" in C major, written in 1842, is one of the best known of the pieces from his suite of incidental music to Shakespeare's play A Midsummer Night's Dream...
(see example).

The score was begun 15 March 1927 in Kassel
Kassel
Kassel is a town located on the Fulda River in northern Hesse, Germany. It is the administrative seat of the Kassel Regierungsbezirk and the Kreis of the same name and has approximately 195,000 inhabitants.- History :...
and completed on June 14; the premiere took place on 6 May 1928 at the Festspiele Wiesbaden and was followed by a production in Leipzig
Leipzig
Leipzig Leipzig has always been a trade city, situated during the time of the Holy Roman Empire at the intersection of the Via Regia and Via Imperii, two important trade routes. At one time, Leipzig was one of the major European centres of learning and culture in fields such as music and publishing...
. 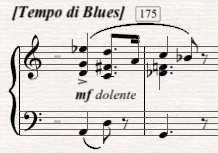 After a short overture the curtain rises on a training room. Evelyne complains about the strenuous exercises for a coming Charleston
Charleston (dance)
The Charleston is a dance named for the harbor city of Charleston, South Carolina. The rhythm was popularized in mainstream dance music in the United States by a 1923 tune called "The Charleston" by composer/pianist James P. Johnson which originated in the Broadway show Runnin' Wild and became one...
marathon, but her instructor Gaston reminds her that this is pretext for their shared moments together. Her husband, the dieting boxer Ochsenschwanz, enters and watches them eat breakfast with growing displeasure, erupting when he catches them kissing: a blow meant for Gaston instead demolishes his new training machine. He locks Evelyne in her room and ruefully surveys the wreckage before going out, allowing the lovers to sing a duet through the window.

Anna Maria, a homely looking student, enters timidly: "I'm conscious of what I'm doing, but my subconscious is too strong" and is forced to hide under the table when Ochsenschwanz brings a journalist in for an interview over his training breakfast. "What are your impressions of America?" (trying the toast) "Too dry
Prohibition
Prohibition of alcohol, often referred to simply as prohibition, is the practice of prohibiting the manufacture, transportation, import, export, sale, and consumption of alcohol and alcoholic beverages. The term can also apply to the periods in the histories of the countries during which the...
." "What do you think of Beethoven?" "Don't bother me with those (sic!) amateurs. Of course I know the masters like Dempsey
Jack Dempsey
William Harrison "Jack" Dempsey was an American boxer who held the world heavyweight title from 1919 to 1926. Dempsey's aggressive style and exceptional punching power made him one of the most popular boxers in history. Many of his fights set financial and attendance records, including the first...
..." "Do you know Goethe's Faust
Goethe's Faust
Johann Wolfgang von Goethe's Faust is a tragic play in two parts: and . Although written as a closet drama, it is the play with the largest audience numbers on German-language stages...
?" "Mine is better!" (Faust meaning in German "fist".) "What about modern art?" "Götz von Berlichingen." Anna Maria is discovered and asks for an autograph just as a maid brings a visiting card from Professor Himmelhuber. The daughter is distraught, Ochsenschwanz meets her father in the living room. A thinly disguised Gaston has been observing; he talks Anna Maria into stripping to her long underwear and posing as the dummy on the new training machine he is delivering.

The ruse at first takes in the father, until Gaston's whispered threats of a scandal with an underage girl ("think of America!") send an enraged Ochsenschwanz to the machine where he gives Anna Maria a knockout blow. Surrounded by accusations of adultery, seduction and sadism, he cries "Just be thankful I can work my rage off on the machine instead of yourselves!" Only as the rest depart does he notice he has been cuffed to the device. A Minister enters to inform him that he's been chosen for the Olympics
Olympic Games
The Olympic Games is a major international event featuring summer and winter sports, in which thousands of athletes participate in a variety of competitions. The Olympic Games have come to be regarded as the world’s foremost sports competition where more than 200 nations participate...
, but instead of responding to pleas to turn the machine off, he says by no means would he steal even a minute from Ochsenschwanz' training, after all, "You are the glory of the nation!"
The source of this article is wikipedia, the free encyclopedia.  The text of this article is licensed under the GFDL.