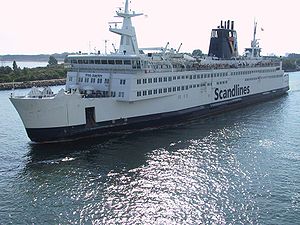 Scandlines is a major German-Danish ferry
Ferry
A ferry is a form of transportation, usually a boat, but sometimes a ship, used to carry primarily passengers, and sometimes vehicles and cargo as well, across a body of water. Most ferries operate on regular, frequent, return services...
operator.

It consists of a parent company, Scandlines AG, and under this parent company a German subsidiary named Scandlines Deutschland GmbH and a Danish subsidiary named Scandlines Danmark A/S. Scandlines as a whole operates 17 lines for passenger and freight
Cargo
Cargo is goods or produce transported, generally for commercial gain, by ship, aircraft, train, van or truck. In modern times, containers are used in most intermodal long-haul cargo transport.-Marine:...
in and between Denmark, Germany, Sweden, and the Baltic countries
Baltic countries
The term Baltic states refers to the Baltic territories which gained independence from the Russian Empire in the wake of World War I: primarily the contiguous trio of Estonia, Latvia, Lithuania ; Finland also fell within the scope of the term after initially gaining independence in the 1920s.The...
.

Scandlines used to be co-owned by the Danish Ministry of Transportation (50%) and Deutsche Bahn AG (50%), but as of June 2007, it is owned by a consortium consisting of 3i Group
3i
3i Group plc is a multinational private equity and venture capital company headquartered in London, United Kingdom. It has offices in 13 countries across Asia, Europe and the Americas and had total assets under management of £12.7 billion as at 31 March 2011...
of London (40%), Allianz Capital Partners
Allianz
SE is a global financial services company headquartered in Munich, Germany. Its core business and focus is insurance. As of 2010, it was the world's 12th-largest financial services group and 23rd-largest company according to a composite measure by Forbes magazine.Its Allianz Global Investors...
of Munich (40%) and Deutsche Seereederei of Rostock (20%). The consortium bought Scandlines for a total of 1,560 million Euros. On 29 October 2010, the remaining 20% of Scandlines was acquired from Deutsche Seereederei (DSR) Rostock. Now 3i and Allianz both hold 50% of Scandlines.

Scandlines operates nine routes across the Baltic Sea
Baltic Sea
The Baltic Sea is a brackish mediterranean sea located in Northern Europe, from 53°N to 66°N latitude and from 20°E to 26°E longitude. It is bounded by the Scandinavian Peninsula, the mainland of Europe, and the Danish islands. It drains into the Kattegat by way of the Øresund, the Great Belt and...
.