Encyclopedia
Trelleborg is a locality
Urban areas in Sweden
Urban area is a common English translation of the Swedish term tätort. The official term in English, used by Statistics Sweden, is, however, locality. There are 1,940 localities in Sweden . They could be compared with census-designated places in the United States.A tätort in Sweden has a minimum of...
and the seat of Trelleborg Municipality
Trelleborg Municipality
Trelleborg Municipality is the southernmost municipality of Sweden, in Skåne County. Its seat is located in the city Trelleborg....
, Skåne County
Skåne County
Skåne County is the southernmost administrative county or län, of Sweden, basically corresponding to the historical province Scania. It borders the counties of Halland, Kronoberg and Blekinge. The seat of residence for the Skåne Governor is the town of Malmö...
, Sweden
Sweden
Sweden , officially the Kingdom of Sweden , is a Nordic country on the Scandinavian Peninsula in Northern Europe. Sweden borders with Norway and Finland and is connected to Denmark by a bridge-tunnel across the Öresund....
with 25,643 inhabitants in 2005. It is the southernmost town in Sweden.

The earliest written record of Trelleborg is from 1257, when Trelleborg was presented as a wedding gift from the Danish
Denmark
Denmark is a Scandinavian country in Northern Europe. The countries of Denmark and Greenland, as well as the Faroe Islands, constitute the Kingdom of Denmark . It is the southernmost of the Nordic countries, southwest of Sweden and south of Norway, and bordered to the south by Germany. Denmark...
royal family to the Swedish Prince Valdemar
Valdemar I of Sweden
Valdemar, English also Waldemar; , was King of Sweden 1250–1275.-Biography:Valdemar was the son of princess Ingeborg Eriksdotter of Sweden and Birger jarl, from the House of Bjelbo. During the first sixteen years of his reign, it was Birger Jarl who was the real ruler...
. It was soon reconquered by the Danes, and it belonged to Denmark until 1658, when Scania
Scania
Scania is the southernmost of the 25 traditional non-administrative provinces of Sweden, constituting a peninsula on the southern tip of the Scandinavian peninsula, and some adjacent islands. The modern administrative subdivision Skåne County is almost, but not totally, congruent with the...
was lost to Sweden by the Treaty of Roskilde
Treaty of Roskilde
The Treaty of Roskilde was concluded on 26 February or 8 March 1658 during the Second Northern War between Frederick III of Denmark–Norway and Charles X Gustav of Sweden in the Danish city of Roskilde...
.

In medieval times, Trelleborg had an important part in herring
Herring
Herring is an oily fish of the genus Clupea, found in the shallow, temperate waters of the North Pacific and the North Atlantic oceans, including the Baltic Sea. Three species of Clupea are recognized. The main taxa, the Atlantic herring and the Pacific herring may each be divided into subspecies...
fishing. At that time, this was conducted along the entire coast line of what is now Sweden, as the herring shoals were of such great numbers that fishermen were said to have been able to stand on the shore and land fish with nets. Trelleborg became an important merchant city as merchants from Germany came to trade herring. In 1619 following a devastating fire, the Danish King decided that one merchant city on the coast was sufficient and revoked Trelleborg's status as a merchant city in order to favour Malmö. 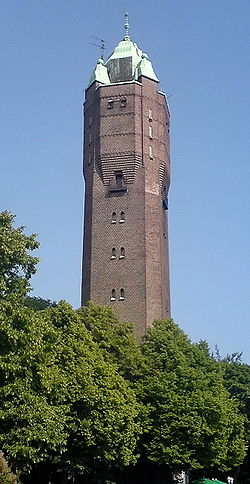 The first written record of the name is from 1291, Threlæburgh. The name is found in many places in Scandinavia
Scandinavia
Scandinavia is a cultural, historical and ethno-linguistic region in northern Europe that includes the three kingdoms of Denmark, Norway and Sweden, characterized by their common ethno-cultural heritage and language. Modern Norway and Sweden proper are situated on the Scandinavian Peninsula,...
. Borg means castle or stronghold and träl can be thrall
Thrall
Thrall was the term for a serf or unfree servant in Scandinavian culture during the Viking Age.Thralls were the lowest in the social order and usually provided unskilled labor during the Viking era.-Etymology:...
, but can also refer to the leaning poles on the outside of the medieval Viking stronghold. Remains of the original stronghold were excavated in 1988.

At the end of the 19th century, Trelleborg became an industrial town and the foundation of modern Trelleborg has largely been created by a few large companies; most notably Trelleborg Industries
Trelleborg AB
Trelleborg AB is a global engineering group focused on polymer technology, with headquarters in Trelleborg, approximately 21,000 employees , and a revenue of 27 billion SEK . Its stock has been listed at the Stockholm Stock Exchange since 1964, currently on the OMX NordicList, large cap...
and the ferry company and business related to the seaport. Much of it has been the work of the influential businessman Johan Kock. Other important industries he established were Akzo Nobel Inks, Today called Flint Group Sweden, manufacturing printing inks (established as Gleitzman Industries in the 1890s), and DUX, who make beds. Later in the 1950s, Perstorp (Flooring) Industries was established in Trelleborg and it manufactures flooring boards and other plastic material. Trelleborg continues to be a working-class oriented city and is politically a traditional stronghold for the Swedish Social Democratic Party
Swedish Social Democratic Party
The Swedish Social Democratic Workers' Party, , contesting elections as 'the Workers' Party – the Social Democrats' , or sometimes referred to just as 'the Social Democrats' and most commonly as Sossarna ; is the oldest and largest political party in Sweden. The party was founded in 1889...
. However, since the latest elections in 2006 the Social Democratic Party is in opposition in the municipality.

It is today often visited by people travelling from Sweden to Germany
Germany
Germany , officially the Federal Republic of Germany , is a federal parliamentary republic in Europe. The country consists of 16 states while the capital and largest city is Berlin. Germany covers an area of 357,021 km2 and has a largely temperate seasonal climate...
because of the ferries to Rostock
Rostock
Rostock -Early history:In the 11th century Polabian Slavs founded a settlement at the Warnow river called Roztoc ; the name Rostock is derived from that designation. The Danish king Valdemar I set the town aflame in 1161.Afterwards the place was settled by German traders...
, Sassnitz
Sassnitz
Sassnitz is a town on the Jasmund peninsula, Rügen Island, in the Federal State of Mecklenburg-Vorpommern, Germany. The population as of 2007 was 10,747....
and Lübeck
Lübeck
The Hanseatic City of Lübeck is the second-largest city in Schleswig-Holstein, in northern Germany, and one of the major ports of Germany. It was for several centuries the "capital" of the Hanseatic League and, because of its Brick Gothic architectural heritage, is listed by UNESCO as a World...
- Travemünde
Travemünde
Travemünde is a borough of Lübeck, Germany, located at the mouth of the river Trave in Lübeck Bay. It began life as a fortress built by Henry the Lion, Duke of Saxony, in the 12th century to guard the mouth of the Trave, and the Danes subsequently strengthened it. It became a town in 1317 and in...
in Germany. These ferries began sailing on May 1, 1897 with the Sassnitz line; the route to Travemünde was established in 1962, while the line to the former East German city Rostock was inaugurated after the fall of the Berlin Wall
Berlin Wall
The Berlin Wall was a barrier constructed by the German Democratic Republic starting on 13 August 1961, that completely cut off West Berlin from surrounding East Germany and from East Berlin...
in 1989. The ferries carry both passengers on one-day journeys, cars with vacationing families, and heavy trucks on their way through Europe. In April 1917, Lenin arrived with the ferry from Sassnitz to Trelleborg on his way from exile back to Russia
Russia
Russia or , officially known as both Russia and the Russian Federation , is a country in northern Eurasia. It is a federal semi-presidential republic, comprising 83 federal subjects...
to lead the Revolution
October Revolution
The October Revolution , also known as the Great October Socialist Revolution , Red October, the October Uprising or the Bolshevik Revolution, was a political revolution and a part of the Russian Revolution of 1917...
.

Today Trelleborg has the second largest seaport of Sweden, behind Gothenburg
Gothenburg
Gothenburg is the second-largest city in Sweden and the fifth-largest in the Nordic countries. Situated on the west coast of Sweden, the city proper has a population of 519,399, with 549,839 in the urban area and total of 937,015 inhabitants in the metropolitan area...
. Every year it transports more than 10 million metric tonnes of cargo.

Overlooking the harbour of Smygehuk
Smygehuk
Smygehuk is a harbour and fishing village near Trelleborg in Skåne, Sweden. It's most known for being the southernmost point of Sweden and the Scandinavian Peninsula . To the west of the harbour is Smygehuk Lighthouse and Smygehuk Hostel....
near Trelleborg is a statue of a nude woman that was installed in 1930. Uma Thurman
Uma Thurman
Uma Karuna Thurman is an American actress and model. She has performed in leading roles in a variety of films, ranging from romantic comedies and dramas to science fiction and action movies. Among her best-known roles are those in the Quentin Tarantino films Pulp Fiction and Kill Bill...
's grandmother, the mother of Nena von Schlebrügge
Nena von Schlebrügge
Birgitte Caroline 'Nena' von Schlebrügge is a Mexican former fashion model of the 1950s and 1960s and is now the managing director of Menla Mountain Retreat....
, was the model for this statue.