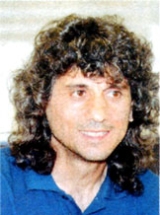 Encyclopedia
Savvas Kofidis (born 5 February 1961 near Alma-Ata, Kazakhstan
Kazakhstan
Kazakhstan , officially the Republic of Kazakhstan, is a transcontinental country in Central Asia and Eastern Europe. Ranked as the ninth largest country in the world, it is also the world's largest landlocked country; its territory of is greater than Western Europe...
, USSR) is a Greek
Greece
Greece , officially the Hellenic Republic , and historically Hellas or the Republic of Greece in English, is a country in southeastern Europe....
football coach
Coach (sport)
In sports, a coach is an individual involved in the direction, instruction and training of the operations of a sports team or of individual sportspeople.-Staff:...
and former midfielder
Midfielder
A midfielder is an association football position. Some midfielders play a more defensive role, while others blur the boundaries between midfielders and forwards. The number of midfielders a team uses during a match may vary, depending on the team's formation and each individual player's role...
player.

He started his career in Iraklis, debuting in 18 January 1981 when Iraklis was participating in the Beta Ethniki
Beta Ethniki
Football League, former Beta Ethniki, is the second highest professional football league in Greece.-History:In its first years, the system of conduct was very intriguing. It began in 1954 as regional championship, separated in two groups, North and South. Then, the participating teams were the...
. In Iraklis's team he played seven seasons before heading to Olympiacos. In 1992 he joined Aris Thessaloniki F.C.
Aris Thessaloniki F.C.
Aris Football Club , also known as God of war and the Yellows, is a Greek football club based in the city of Thessaloniki, Macedonia. Formed in 1914, the club was a founding member of Macedonian Football Clubs Association as well as the Hellenic Football Federation, they currently compete in...
, the city rivals of Iraklis, where he played until rejoining Iraklis in the 1996–97 season.

During the 2002–2003 period he was the assistant coach of Ivan Jovanovic
Ivan Jovanovic (coach)
Ivan Jovanović is a Serbian football manager and former footballer. He is the coach of APOEL since January 7, 2008.-Club career:Jovanović played for FK Rad in the Yugoslav First League during the 1987–88 and 1988–89 seasons. The next season, he transferred to the Greek side Iraklis Thessaloniki...
in Iraklis, as well as the next period, assisting head coach Sergio Markarián
Sergio Markarián
Sergio Apraham Markarián is a Uruguayan-Armenian football coach. Currently, he is the head coach of the national football team of Peru.-Early life:...
. After Markarián resigned, Kofidis took in charge as the head coach. The next year, with Kofidis taking the reins, was hugely successful as "The Old One", against all expectations, finished 4th in the 2005–2006 Alpha Ethniki championship, and qualified for the UEFA Cup
UEFA Cup
The UEFA Europa League is an annual association football cup competition organised by UEFA since 1971 for eligible European football clubs. It is the second most prestigious European club football contest after the UEFA Champions League...
. During the summer, however, many key players were sold as the team was in heavy debt, and the following year was anything but successful. After a string of 10 league matches without a win, and an early exit from the UEFA Cup against Polish team Wisła Kraków, Kofidis resigned. In January 2007 he became head coach in Skoda Xanthi
Skoda Xanthi
Skoda Xanthi F.C. , or F.C. Skoda Xanthi Athletic Club, is a Greek football club, based in the city of Xanthi. The club currently competes in the Super League Greece.-History:...
following Takis Lemonis
Takis Lemonis
Takis Lemonis is a former Greek football player , former manager of Cypriot champion Omonia and current manager of Panionios.-Playing career:...
's resignation, but soon left the job. On 30 October 2009 Iraklis F.C. club officials have sacked coach Oleg Protasov
Oleg Protasov
Oleh Valeriyovych Protasov is a former football striker. He was a key member of the Soviet Union national team throughout the 1980s; his 29 goals for the Soviet Union are second in the team's history, behind Oleh Blokhin's 42...
to replace him with Kofidis.