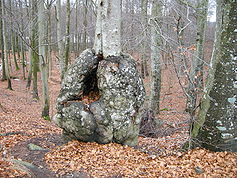 The Sarmatic mixed forests constitute an ecoregion
Ecoregion
An ecoregion , sometimes called a bioregion, is an ecologically and geographically defined area that is smaller than an ecozone and larger than an ecosystem. Ecoregions cover relatively large areas of land or water, and contain characteristic, geographically distinct assemblages of natural...
within the Temperate broadleaf and mixed forests
Temperate broadleaf and mixed forests
Mixed forests are a temperate and humid biome. The typical structure of these forests includes four layers. The uppermost layer is the canopy composed of tall mature trees ranging from 33 to 66 m high. Below the canopy is the three-layered, shade-tolerant understory that is roughly 9 to...
Biome
Biome
Biomes are climatically and geographically defined as similar climatic conditions on the Earth, such as communities of plants, animals, and soil organisms, and are often referred to as ecosystems. Some parts of the earth have more or less the same kind of abiotic and biotic factors spread over a...
, according to the World Wide Fund for Nature
World Wide Fund for Nature
The World Wide Fund for Nature is an international non-governmental organization working on issues regarding the conservation, research and restoration of the environment, formerly named the World Wildlife Fund, which remains its official name in Canada and the United States...
classification (ecoregion PA0436).

This ecoregion is situated in Europe
Europe
Europe is, by convention, one of the world's seven continents. Comprising the westernmost peninsula of Eurasia, Europe is generally 'divided' from Asia to its east by the watershed divides of the Ural and Caucasus Mountains, the Ural River, the Caspian and Black Seas, and the waterways connecting...
between boreal forests/taiga in the north and the broadleaf belt in the south and occupies about 846,100 km² (326,700 mi²) in southernmost Norway
Norway
Norway , officially the Kingdom of Norway, is a Nordic unitary constitutional monarchy whose territory comprises the western portion of the Scandinavian Peninsula, Jan Mayen, and the Arctic archipelago of Svalbard and Bouvet Island. Norway has a total area of and a population of about 4.9 million...
, southern Sweden
Sweden
Sweden , officially the Kingdom of Sweden , is a Nordic country on the Scandinavian Peninsula in Northern Europe. Sweden borders with Norway and Finland and is connected to Denmark by a bridge-tunnel across the Öresund....
, southwesternmost Finland
Finland
Finland , officially the Republic of Finland, is a Nordic country situated in the Fennoscandian region of Northern Europe. It is bordered by Sweden in the west, Norway in the north and Russia in the east, while Estonia lies to its south across the Gulf of Finland.Around 5.4 million people reside...
, Estonia
Estonia
Estonia , officially the Republic of Estonia , is a state in the Baltic region of Northern Europe. It is bordered to the north by the Gulf of Finland, to the west by the Baltic Sea, to the south by Latvia , and to the east by Lake Peipsi and the Russian Federation . Across the Baltic Sea lies...
, Latvia
Latvia
Latvia , officially the Republic of Latvia , is a country in the Baltic region of Northern Europe. It is bordered to the north by Estonia , to the south by Lithuania , to the east by the Russian Federation , to the southeast by Belarus and shares maritime borders to the west with Sweden...
, northern Lithuania
Lithuania
Lithuania , officially the Republic of Lithuania is a country in Northern Europe, the biggest of the three Baltic states. It is situated along the southeastern shore of the Baltic Sea, whereby to the west lie Sweden and Denmark...
, northern Belarus
Belarus
Belarus , officially the Republic of Belarus, is a landlocked country in Eastern Europe, bordered clockwise by Russia to the northeast, Ukraine to the south, Poland to the west, and Lithuania and Latvia to the northwest. Its capital is Minsk; other major cities include Brest, Grodno , Gomel ,...
and the central part of European Russia
European Russia
European Russia refers to the western areas of Russia that lie within Europe, comprising roughly 3,960,000 square kilometres , larger in area than India, and spanning across 40% of Europe. Its eastern border is defined by the Ural Mountains and in the south it is defined by the border with...
.

The ecoregion consists of mixed forests dominated by Quercus robur (which only occasionally occurs farther north), Picea abies (which disappears further south due to insufficient moisture) and Pinus sylvestris (in drier locations). Geobotanically, it is divided between the Central Europe
Central Europe
Central Europe or alternatively Middle Europe is a region of the European continent lying between the variously defined areas of Eastern and Western Europe...
an and Eastern Europe
Eastern Europe
Eastern Europe is the eastern part of Europe. The term has widely disparate geopolitical, geographical, cultural and socioeconomic readings, which makes it highly context-dependent and even volatile, and there are "almost as many definitions of Eastern Europe as there are scholars of the region"...
an floristic province
Floristic province
A phytochorion, in phytogeography, is a geographic area with a relatively uniform composition of plant species. Adjacent phytochoria do not usually have a sharp boundary, but rather a soft one, a transitional area in which many species from both regions overlap...
s of the Circumboreal Region
Circumboreal Region
The Circumboreal Region is a floristic region within the Holarctic Kingdom in Eurasia and North America, as delineated by such geobotanists as Josias Braun-Blanquet and Armen Takhtajan....
of the Holarctic Kingdom.
The source of this article is wikipedia, the free encyclopedia.  The text of this article is licensed under the GFDL.