Two of the important proteins are myosin
Myosin
Myosins comprise a family of ATP-dependent motor proteins and are best known for their role in muscle contraction and their involvement in a wide range of other eukaryotic motility processes. They are responsible for actin-based motility. The term was originally used to describe a group of similar...
, which forms the thick filament, and actin
Actin
Actin is a globular, roughly 42-kDa moonlighting protein found in all eukaryotic cells where it may be present at concentrations of over 100 μM. It is also one of the most highly-conserved proteins, differing by no more than 20% in species as diverse as algae and humans...
, which forms the thin filament. Myosin has a long, fibrous tail and a globular head, which binds to actin. The myosin head also binds to ATP
Adenosine triphosphate
Adenosine-5'-triphosphate is a multifunctional nucleoside triphosphate used in cells as a coenzyme. It is often called the "molecular unit of currency" of intracellular energy transfer. ATP transports chemical energy within cells for metabolism...
, which is the source of energy for muscle movement. Myosin can only bind to actin when the binding sites on actin are exposed by calcium ions.

Actin molecules are bound to the Z line, which forms the borders of the sarcomere. Other bands appear when the sarcomere is relaxed.

A muscle cell from a biceps
Biceps
Biceps may refer to:*Biceps brachii muscle, a muscle located on the inside of the upper arm*Biceps femoris muscle, one of the hamstring muscles of the back of each thigh*Biceps , a point in a metrical pattern...
may contain 100,000 sarcomeres. The myofibrils of smooth muscle
Smooth muscle
Smooth muscle is an involuntary non-striated muscle. It is divided into two sub-groups; the single-unit and multiunit smooth muscle. Within single-unit smooth muscle tissues, the autonomic nervous system innervates a single cell within a sheet or bundle and the action potential is propagated by...
cells are not arranged into sarcomeres. 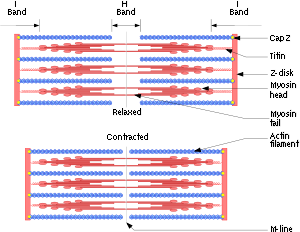 The relationship between the proteins and the regions of the sarcomere are as follows:

Upon muscle contraction, the A-bands do not change their length (1.85 micrometer in mammalian skeletal muscle), whereas the I-bands and the H-zone shorten. This causes the Z lines to come closer together.

The protein tropomyosin
Tropomyosin
Tropomyosin is an actin-binding protein that regulates actin mechanics. It is important, among other things, for muscle contraction. Tropomyosin, along with the troponin complex, associate with actin in muscle fibers and regulate muscle contraction by regulating the binding of myosin...
covers the myosin binding sites of the actin molecules in the muscle cell. To allow the muscle cell to contract, tropomyosin must be moved to uncover the binding sites on the actin. Calcium ions bind with troponin-C molecules (which are dispersed throughout the tropomyosin protein) and alter the structure of the tropomyosin, forcing it to reveal the cross bridge binding site on the actin. The concentration of calcium within muscle cells is controlled by the sarcoplasmic reticulum, a unique form of endoplasmic reticulum. Muscle contraction ends when calcium ions are pumped back into the sarcoplasmic reticulum, allowing the contractile apparatus and thus muscle cell to relax.

At rest, the myosin head is bound to an ATP
Adenosine triphosphate
Adenosine-5'-triphosphate is a multifunctional nucleoside triphosphate used in cells as a coenzyme. It is often called the "molecular unit of currency" of intracellular energy transfer. ATP transports chemical energy within cells for metabolism...
molecule in a low-energy configuration and is unable to access the cross bridge binding sites on the actin. However, the myosin head can hydrolyze ATP into ADP and an inorganic phosphate ion. A portion of the energy released in this reaction changes the shape of the myosin head and promotes it to a high-energy configuration. Through the process of binding to the actin, the myosin head releases ADP and an inorganic phosphate ion, changing its configuration back to one of low energy. The myosin remains attached to actin in a state known as rigor, until a new ATP binds the myosin head. This binding of ATP to myosin releases the actin by cross-bridge dissociation. The ATP-associated myosin is ready for another cycle, beginning with hydrolysis of the ATP.

Most muscle cells only store enough ATP for a small number of muscle contractions. While muscle cells also store glycogen, most of the energy required for contraction is derived from phosphagens. One such phosphagen
Phosphagen
The phosphagens are energy storage compounds, also known as high-energy phosphate compounds, are chiefly found in muscular tissue in animals. They allow a high-energy phosphate pool to be maintained in a concentration range, which, if it all were ATP, would create problems due to the ATP consuming...
is creatine phosphate, which is used to provide ADP with a phosphate group for ATP synthesis in vertebrates.

The structure of the sarcomere affects its function in several ways. The overlap of actin & myosin gives rise to the length-tension curve, which shows how sarcomere force output decreases if the muscle is stretched so that fewer cross-bridges can form or compressed until actin filaments interfere with each other. Length of the actin and myosin filaments (taken together as sarcomere length) affects force and velocity - longer sarcomeres have more cross-bridges and thus more force, but have a reduced range of shortening. Vertebrate
Vertebrate
Vertebrates are animals that are members of the subphylum Vertebrata . Vertebrates are the largest group of chordates, with currently about 58,000 species described. Vertebrates include the jawless fishes, bony fishes, sharks and rays, amphibians, reptiles, mammals, and birds...
s display a very limited range of sarcomere lengths, with roughly the same optimal length (length at peak length-tension) in all muscles of an individual as well as between species. Arthropods, however, show tremendous variation (over seven-fold) in sarcomere length, both between species and between muscles in a single individual. The reasons for the lack of substantial sarcomere variability in vertebrates is not fully known.