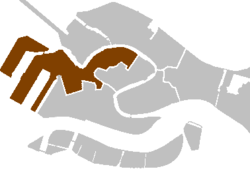 Santa Croce is one of the six sestieri of Venice
Venice
Venice is a city in northern Italy which is renowned for the beauty of its setting, its architecture and its artworks. It is the capital of the Veneto region...
, northern Italy
Italy
Italy , officially the Italian Republic languages]] under the European Charter for Regional or Minority Languages. In each of these, Italy's official name is as follows:;;;;;;;;), is a unitary parliamentary republic in South-Central Europe. To the north it borders France, Switzerland, Austria and...
.

It occupies the north west part of the main islands, and can be divided into two areas: the eastern area being largely mediaeval, and the western - including the main port
Port
A port is a location on a coast or shore containing one or more harbors where ships can dock and transfer people or cargo to or from land....
and the Tronchetto
Tronchetto
Tronchetto is an artificial island in the Venetian Lagoon, northern Italy, located at the westernmost tip of the main Venice island....
- mostly lying on land reclaimed in the 10th century.

The district includes the Piazzale Roma
Piazzale Roma
Piazzale Roma is a square in Venice, Italy.The square acts as the main bus station for Venice. There are bus links to Venice Marco Polo Airport and Treviso Airport. The square is close to the main Santa Lucia railway station for Venice, linked by the Ponte della Costituzione, a modern footbridge...
, home to Venice's bus station
Bus station
A bus station is a structure where city or intercity buses stop to pick up and drop off passengers. It is larger than a bus stop, which is usually simply a place on the roadside, where buses can stop...
and car parks, and around which is the only area of the city in which car
Automobile
An automobile, autocar, motor car or car is a wheeled motor vehicle used for transporting passengers, which also carries its own engine or motor...
s can travel. The tourist attractions lie mostly in the eastern part of the quarter, and include the Church of San Nicolo da Tolentino, the Fondaco dei Turchi
Fondaco dei Turchi
The Fondaco dei Turchi is a Veneto-Byzantine style palazzo on the Grand Canal of Venice, northeast Italy.-Early history:...
, the Church of San Giacomo dell'Orio, the Centre for the History of Costume, the Patrician Palace and Ca'Corner della Regina.

The area was once part of the Luprio swamp, but has been steadily reclaimed. It is the area most affected by the opening of the lagoon road in April 1933.
The source of this article is wikipedia, the free encyclopedia.  The text of this article is licensed under the GFDL.