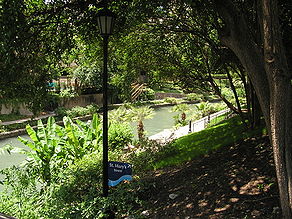 The San Antonio River is a major waterway that originates in central Texas
Texas
Texas is the second largest U.S. state by both area and population, and the largest state by area in the contiguous United States.The name, based on the Caddo word "Tejas" meaning "friends" or "allies", was applied by the Spanish to the Caddo themselves and to the region of their settlement in...
in a cluster of springs in north central San Antonio, approximately four miles north of downtown, and follows a roughly southeastern path through the state. It eventually feeds into the Guadalupe River
Guadalupe River (Texas)
The Guadalupe River runs from Kerr County, Texas to San Antonio Bay on the Gulf of Mexico. The river is a popular destination for rafters and canoers. Larger cities along the river include New Braunfels, Kerrville, Seguin, Gonzales, Cuero, and Victoria...
about ten miles from San Antonio Bay
San Antonio Bay
San Antonio Bay is a bay on the Texas Gulf coast situated between Matagorda and Aransas Bay. It consists mainly of the combined waters of the San Antonio and Guadalupe rivers, and is located at the mouth of the Guadalupe River, about 55 miles northeast of Corpus Christi and 130 miles southeast...
on the Gulf of Mexico
Gulf of Mexico
The Gulf of Mexico is a partially landlocked ocean basin largely surrounded by the North American continent and the island of Cuba. It is bounded on the northeast, north and northwest by the Gulf Coast of the United States, on the southwest and south by Mexico, and on the southeast by Cuba. In...
. The river is 240 miles long and crosses five counties: Bexar
Bexar County, Texas
As of the census of 2000, there were 1,392,931 people, 488,942 households, and 345,681 families residing in the county. The population density was 1,117 people per square mile . There were 521,359 housing units at an average density of 418 per square mile...
, Goliad, Karnes
Karnes County, Texas
Karnes County is a county located in the U.S. state of Texas. As of 2000, the population was 15,446. Its county seat is Karnes City. Karnes County is named for Henry Karnes, a soldier in the Texas Revolution.-Geography:...
, Refugio, and Wilson
Wilson County, Texas
Wilson County is a county located in the U.S. state of Texas. In 2000, its population was 32,408. Its county seat is Floresville. The county is named after James Charles Wilson....
.

The first documented record of the river was from Álvar Núñez Cabeza de Vaca
Álvar Núñez Cabeza de Vaca
Álvar Núñez Cabeza de Vaca was a Spanish explorer of the New World, one of four survivors of the Narváez expedition...
on his explorations of Texas
Texas
Texas is the second largest U.S. state by both area and population, and the largest state by area in the contiguous United States.The name, based on the Caddo word "Tejas" meaning "friends" or "allies", was applied by the Spanish to the Caddo themselves and to the region of their settlement in...
in 1535. The river was later named after San Antonio de Padua by the first governor of Spanish Texas
Spanish Texas
Spanish Texas was one of the interior provinces of New Spain from 1690 until 1821. Although Spain claimed ownership of the territory, which comprised part of modern-day Texas, including the land north of the Medina and Nueces Rivers, the Spanish did not attempt to colonize the area until after...
, Domingo Terán de los Ríos
Domingo Terán de los Ríos
Domingo Terán de los Ríos served as the first governor of Spanish Texas from 1691 to 1692.-Previous service:Terán served the Spanish crown in Peru for two decades. He came to Mexico in 1681, and was governor of the province of Sonora y Sinaloa for approximately five years...
in 1691. During the Texas Revolution
Texas Revolution
The Texas Revolution or Texas War of Independence was an armed conflict between Mexico and settlers in the Texas portion of the Mexican state Coahuila y Tejas. The war lasted from October 2, 1835 to April 21, 1836...
, the river was host to several major conflicts, including the Battle of Concepcion
Battle of Concepcion
The Battle of Concepción was fought on October 28, 1835 between Mexican troops under Colonel Domingo Ugartechea and Texian insurgents led by James Bowie and James Fannin. The 30-minute engagement, which historian J.R...
, the Grass Fight
Grass Fight
The Grass Fight was a small battle during the Texas Revolution, fought between the Mexican Army and the Texian Army. The battle took place on November 26, 1835, just south of San Antonio de Béxar in Mexican Texas...
, the siege of Bexar, the Goliad Campaign
Goliad Campaign
The Goliad Campaign refers to a series of battles which occurred in 1836 as part of the Texas Revolution, which ultimately led to the Goliad massacre...
, and the Battle of the Alamo
Battle of the Alamo
The Battle of the Alamo was a pivotal event in the Texas Revolution. Following a 13-day siege, Mexican troops under President General Antonio López de Santa Anna launched an assault on the Alamo Mission near San Antonio de Béxar . All but two of the Texian defenders were killed...
.