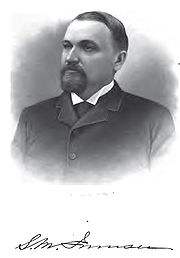 Samuel Martin Inman was a prominent cotton merchant and businessman in Atlanta, Georgia
Georgia (U.S. state)
Georgia is a state located in the southeastern United States. It was established in 1732, the last of the original Thirteen Colonies. The state is named after King George II of Great Britain. Georgia was the fourth state to ratify the United States Constitution, on January 2, 1788...
who is best known for the neighborhood in Atlanta that bears his name.

Inman was born in Dandridge in Jefferson County, Tennessee. He was the son of H. W. Inman and Jane Martin Inman. He went to college at Princeton College
Princeton University
Princeton University is a private research university located in Princeton, New Jersey, United States. The school is one of the eight universities of the Ivy League, and is one of the nine Colonial Colleges founded before the American Revolution....
and at the age of 18 he joined Company K of the First Tennessee Cavalry during the American Civil War
American Civil War
The American Civil War was a civil war fought in the United States of America. In response to the election of Abraham Lincoln as President of the United States, 11 southern slave states declared their secession from the United States and formed the Confederate States of America ; the other 25...
. During the war he served as a lieutenant
Lieutenant
A lieutenant is a junior commissioned officer in many nations' armed forces. Typically, the rank of lieutenant in naval usage, while still a junior officer rank, is senior to the army rank...
of his company and was present at the surrender of the army.

He moved permanently to Atlanta in 1867 to establish the S. W. Inman & Son cotton house with his father. The next year he married Jennie Dick of Rome, Georgia
Rome, Georgia
Located in the foothills of the Appalachian Mountains, Rome is the largest city and the county seat of Floyd County, Georgia, United States. It is the principal city of the Rome, Georgia Metropolitan Statistical Area which encompasses all of Floyd County...
with whom he had two sons and a daughter.

In 1869, they changed the title of the company to S. W. Inman & Co and by 1889, it was the largest cotton business in the city and it had a branch house in Houston, Texas
Houston, Texas
Houston is the fourth-largest city in the United States, and the largest city in the state of Texas. According to the 2010 U.S. Census, the city had a population of 2.1 million people within an area of . Houston is the seat of Harris County and the economic center of , which is the ...
. Some estimated at that time that Inman was worth around $750,000 to $1,000,000, a sum that would have been much larger if not for his charitable donations. By 1889, Inman was on the directory for what was known as the Inman System, a group of nearly all of the railroads covering from Richmond, Virginia
Richmond, Virginia
Richmond is the capital of the Commonwealth of Virginia, in the United States. It is an independent city and not part of any county. Richmond is the center of the Richmond Metropolitan Statistical Area and the Greater Richmond area...
to Montgomery, Alabama
Montgomery, Alabama
Montgomery is the capital of the U.S. state of Alabama, and is the county seat of Montgomery County. It is located on the Alabama River southeast of the center of the state, in the Gulf Coastal Plain. As of the 2010 census, Montgomery had a population of 205,764 making it the second-largest city...
and from Bristol to Savannah, Georgia
Savannah, Georgia
Savannah is the largest city and the county seat of Chatham County, in the U.S. state of Georgia. Established in 1733, the city of Savannah was the colonial capital of the Province of Georgia and later the first state capital of Georgia. Today Savannah is an industrial center and an important...
.

Inman came from a very wealthy and successful family. His brother was John H. Inman
John H. Inman
John Hamilton Inman was a capitalist who invested in cotton, coal, iron and steel, and railroads, especially in the impoverished post-Civil War South...
, the head of the company Inmann, Swann, & Co. of New York
New York
New York is a state in the Northeastern region of the United States. It is the nation's third most populous state. New York is bordered by New Jersey and Pennsylvania to the south, and by Connecticut, Massachusetts and Vermont to the east...
and president of the West Point Terminal Company which controlled 11,000 miles of track and $4,000,000 in steamships. His other brother, Hugh Inman, owned the Kimball House
Kimball House
The Kimball House was the name of two historical hotels in Atlanta, Georgia. Both were constructed on an entire city block at the south-southeast corner of Five Points, bounded by Whitehall Street , Decatur Street, Pryor Street, and Wall Street.-First Kimball House:-Design and construction:In 1870...
hotel in Atlanta. Several other family members were also extremely successful including William H. Inman and Walker Inman who was a part of S. M. Inman & Co.