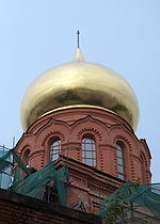 Encyclopedia
Saint Tikhon's Orthodox University of Humanities in Moscow
Moscow
Moscow is the capital, the most populous city, and the most populous federal subject of Russia. The city is a major political, economic, cultural, scientific, religious, financial, educational, and transportation centre of Russia and the continent...
, Russia
Russia
Russia or , officially known as both Russia and the Russian Federation , is a country in northern Eurasia. It is a federal semi-presidential republic, comprising 83 federal subjects...
is a coeducational theological
Theology
Theology is the systematic and rational study of religion and its influences and of the nature of religious truths, or the learned profession acquired by completing specialized training in religious studies, usually at a university or school of divinity or seminary.-Definition:Augustine of Hippo...
university for the laity
Laity
In religious organizations, the laity comprises all people who are not in the clergy. A person who is a member of a religious order who is not ordained legitimate clergy is considered as a member of the laity, even though they are members of a religious order .In the past in Christian cultures, the...
affiliated with the Russian Orthodox Church
Russian Orthodox Church
The Russian Orthodox Church or, alternatively, the Moscow Patriarchate The ROC is often said to be the largest of the Eastern Orthodox churches in the world; including all the autocephalous churches under its umbrella, its adherents number over 150 million worldwide—about half of the 300 million...
. The university, established in 1991, is Russia's first theological graduate-level school for the lay men and women, unlike traditional Orthodox seminaries
Seminary
A seminary, theological college, or divinity school is an institution of secondary or post-secondary education for educating students in theology, generally to prepare them for ordination as clergy or for other ministry...
preparing male students for ordination
Ordination
In general religious use, ordination is the process by which individuals are consecrated, that is, set apart as clergy to perform various religious rites and ceremonies. The process and ceremonies of ordination itself varies by religion and denomination. One who is in preparation for, or who is...
. It is the only Orthodox institution in Russia that is accredited to issue generally accepted diploma
Diploma
A diploma is a certificate or deed issued by an educational institution, such as a university, that testifies that the recipient has successfully completed a particular course of study or confers an academic degree. In countries such as the United Kingdom and Australia, the word diploma refers to...
s. Ten departments of the university provide education in theology, history, teaching, missionary practice, religious arts and music, economics, social services and information management. Basic theology studies are mandatory for students of all departments. Admission does not require adherence to Orthodox faith or any religious tests, except for the icon
Icon
An icon is a religious work of art, most commonly a painting, from Eastern Christianity and in certain Eastern Catholic churches...
school where applicants should demonstrate skills in traditional Orthodox art.

The university traces its roots to Orthodox missionaries Vsevolod Schpiller (1902–1984) and Pavel Troitsky (1894–1991). In the end of 1980s their alumni set up evening courses of theology that merged in a unified institution in 1991 and, with support of Patriarch Alexy II of Moscow, acquired state accreditation
Accreditation
Accreditation is a process in which certification of competency, authority, or credibility is presented.Organizations that issue credentials or certify third parties against official standards are themselves formally accredited by accreditation bodies ; hence they are sometimes known as "accredited...
as a university in 1992. The University is closely associated with the Brotherhood
Sodality
In Christian theology, a sodality is a form of the "Universal Church" expressed in specialized, task-oriented form as opposed to the Christian church in its local, diocesan form . In English, the term sodality is most commonly used by groups in the Catholic Church, where they are also referred to...
of Merciful Saviour, which traditionally provided teaching staff and premises to the University.

For years, the university operated on premises leased from other colleges or on the parish church properties, notably the church of Saint Nicholas in Kyzneci(Zamoskvorechye District) operated by the Brotherhood. In the 2000s the University obtained the rights to the former Bishopric House that prior to the October Revolution
October Revolution
The October Revolution , also known as the Great October Socialist Revolution , Red October, the October Uprising or the Bolshevik Revolution, was a political revolution and a part of the Russian Revolution of 1917...
housed the Orthodox Open University and is now (2009) in the process of rebuilding the run-down building into its new, permanent, campus.

The university has been continuously chaired by one of its founders, and the founding member of the Brotherhood of Merciful Saviour, Revd. Vladimir Vorobyov (born 1941) since 1991. Rector
Rector
The word rector has a number of different meanings; it is widely used to refer to an academic, religious or political administrator...
of the University is, as of 2009, an ex officio member of the Local Council (pomestny sobor) of the Russian Orthodox Church. Vladimir Vorobyov also chairs the department of religion and culture at the Ministry of Internal Affairs Academy.

The university selects its staff primarily from ordained
Ordination
In general religious use, ordination is the process by which individuals are consecrated, that is, set apart as clergy to perform various religious rites and ceremonies. The process and ceremonies of ordination itself varies by religion and denomination. One who is in preparation for, or who is...
Russian Orthodox clerics and lay academicians; guest speakers may come from other denominations (i.e. Roman Catholic Church
Roman Catholic Church
The Catholic Church, also known as the Roman Catholic Church, is the world's largest Christian church, with over a billion members. Led by the Pope, it defines its mission as spreading the gospel of Jesus Christ, administering the sacraments and exercising charity...
). University staff was actively engaged in the 2007 public controversy on the alleged Orthodox clericalisation of school education, opposing the nonsectarian
Nonsectarian
Nonsectarian, in its most literal sense, refers to a lack of sectarianism. The term is also more narrowly used to describe secular private educational institutions or other organizations either not affiliated with or not restricted to a particular religious denomination though the organization...
approach of the Russian Academy of Sciences
Russian Academy of Sciences
The Russian Academy of Sciences consists of the national academy of Russia and a network of scientific research institutes from across the Russian Federation as well as auxiliary scientific and social units like libraries, publishers and hospitals....
. In 2006 the late Patriarch Alexey, speaking in favor of increased Orthodox presence in public schools, proposed Saint Tikhon's university as the source of qualified lay teachers of the Basics of Orthodox Culture course recommended by the Church.

The university celebrates its holiday on November 18, the day of Saint Tikhon's ascension to the Patriarchy in 1917.